This week I’ve seen several headlines proclaiming that Donald Trump will win re-election in a landslide. Why? If you read the articles, they boil down to because the economy doesn’t completely suck.  “In the first quarter of 2019, the US economy grew by 3.2%, the zippiest pace of first-quarter growth since 2015,” it says here. Well, let’s go dance in the streets!

Of course, if you’ve been around awhile you should have noticed that quarterly GDP growth bounces around a bit, and one quarter does not a great expansion make. Still, it has to be said that recent quarters haven’t been bad. 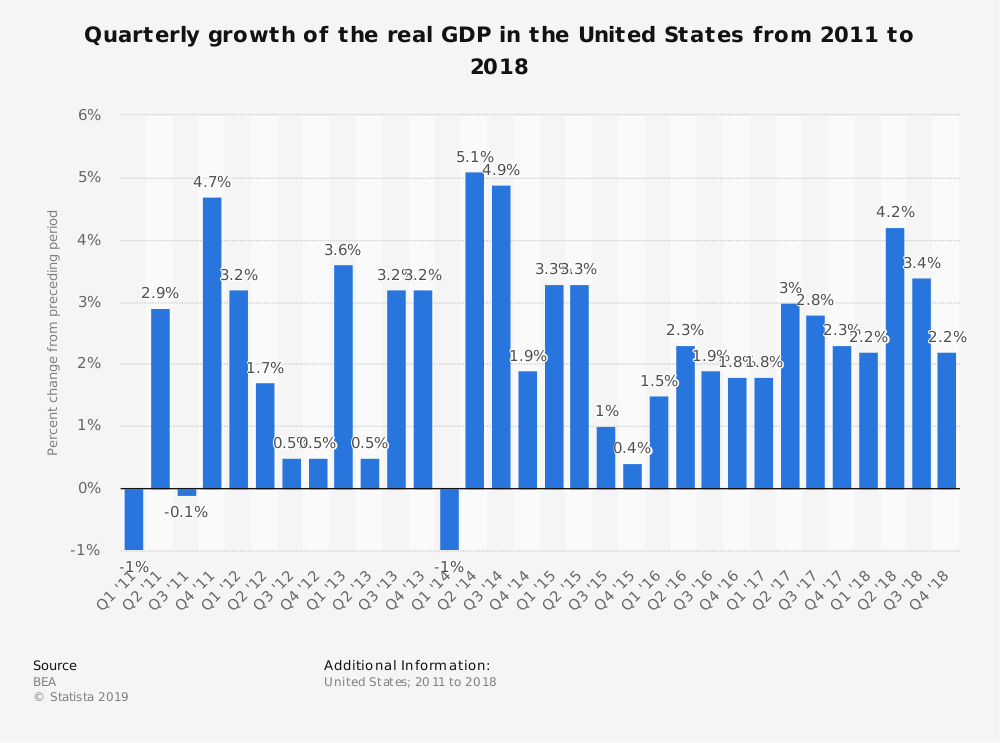 Further, the S&P 500 topped a record yesterday. But investment pros are telling people to enjoy the bullish market while it lasts.

“For US equities over the next decade we should be expecting maybe a 1% to 2% return” based on current stock market valuations, Minerd said. “This long period of outperformance is eventually going to run into a period of underperformance.”

Even so, it’s understandable that Trump supporters see the economy as a great argument for re-electing Trump. But hold on — a new Washington Post-ABC News poll finds that most people don’t trust the economy is working for them. “The survey finds broad dissatisfaction with the country’s economic and political systems. Overall, 60 percent of all voters say the country’s economic system mainly benefits those in power, while 72 percent say the same for the nation’s political structures.”

By all appearances, Trump’s campaign hasn’t accounted for this type of shortcoming. “The economy is still really, really good, and I’ve told [Trump] many, many times that, you know, people vote their pocketbooks,” chief of staff Mick Mulvaney told the Atlantic earlier this month. “What does Clinton say? ‘It’s the economy, stupid.’ I still think that’s the case.” Politicos are similarly bullish. “The economy is just so damn strong right now and by all historic precedent the incumbent should run away with it,” Donald Luskin, chief investment officer of TrendMacrolytics, told Politico in March. “I just don’t see how the blue wall could resist all that.” Look past unemployment, market strength, and gas prices, though, and the picture gets more complicated. Market booms, which tend to benefit the wealthy, aren’t always felt on Main Street, and obscured in low unemployment numbers are concerns about the kinds of jobs available, including a growing reliance on a gig economy.

The truth is that most people don’t care about the bleeping GDP or even the bleeping stock market. They go up, their lives don’t get any better. Like Trump’s fabled tax cuts, somehow the benefits are invisible for working people.

What’s important about this is that even when the economy is doing well by many measures, it hasn’t dissuaded Americans from the belief that there is something seriously wrong.

I have no doubt that Trump understands this. When he ran for president, he told people that the system was “rigged,” and they believed him because they could see it all around them. If you live in a place that used to have manufacturing jobs with good wages, good benefits and job security, all negotiated by a union, but now the only place you can find work is at Walmart or a fulfillment center, it doesn’t seem like all our problems have been solved. Having a job is better than not having one, but having a job that barely makes it possible to get by is still going to leave you dissatisfied.

What Trump faces is that while he hinted at the right problem in 2016, the solution he came up with was standard Republican economics — tax cuts for the wealthy and corporations, deregulation for corporations — with some trade wars tossed in. And at the same time trying to slash the safety net.

Which means that what Democrats should be talking about is not this month’s job creation numbers but the things that are more fundamental. What kind of opportunities do you have? Are you treated with respect and dignity on the job? Can you afford college for your kids? Is your health care secure and affordable? Do we have a tax system that isn’t skewed toward those at the top, and that funds the things we need? Is this really the best we can do?

This is right, and this is an argument that some Democrats are making.  But that doesn’t mean the Dems don’t have their own economic vulnerabilities.

That same discontent was around in 2016; Pew Research’s “direction of the country” poll shows about the same satisfied/dissatisfied numbers in the spring of 2016 as today. In 2016, Donald Trump persuaded a big chunk of the electorate that he felt what they were feeling and would do something about it. The Democratic nominee, um, didn’t do that. See William Greider, “What Killed the Democratic Party?” for a 2016 autopsy.

“The mainstream Democratic story line of victims without victimizers lacks both plausibility and passion. The idea that the Democrats can somehow convince Wall Street to work on behalf of Main Street through mild chiding, rather than acting as Main Street’s champion against the wealthy, no longer resonates. We live in a time of unrest and justified cynicism toward those in power; Democrats will not win if they continue to bring a wonk knife to a populist gun fight.”

The authors are clearly seeking a straightforward repudiation of the governing strategy on economic issues by the last two Democratic presidents. Neither Bill Clinton nor Barack Obama attempted to challenge corporate and financial interests, and neither did nearly enough to address the lost jobs and wages that led to deteriorating affluence and fed popular cynicism and distrust. Obama, for example, gratuitously appointedGeneral Electric CEO Jeffrey Immelt to the White House Jobs Council—an odd choice, given that Immelt’s company was a notorious pioneer in offshoring American jobs to foreign nations. Immelt subsequently admitted that he was motivated by GE’s bottom line: American wages were too high, he explained, so he intended to lower them. He succeeded.

In this context, blue-collar workers were not mistaken when they blamed the Democrats. During the campaign, Hillary Clinton was virtually silent on the party’s complicity. The Democratic nominee couldn’t very well quarrel with the party’s embrace of Republican dogma on free trade and financial deregulation, since it would have meant quarreling with her husband. On the central domestic issue of our time, she had nothing convincing to say. Clinton belatedly announced her opposition to the Trans-Pacific Partnership trade deal championed by President Obama, but at that point it was already dead. The party platform paid the usual respect to liberal economic causes, but who could believe her? Clinton lacked authenticity.

Back in May 2016 I wrote a post noting that Clinton was in trouble, although at the time I was still confident she would win.

This is so obviously a “change” election. To run a candidate who represents the past, who promises to be pragmatic and not attempt anything radical, is an obvious misstep. Loyal Democrats will vote for her, but independents have already shown they’d prefer somebody else. And while Clinton currently looks weak against Trump, if the GOP had gotten its act together and nominated a more “establishment” Republican, I doubt she’d have any chance at all.

Then I went on to note that Dem party elites had decided that voters really didn’t care about economic unfairness. Why should they? The stock market and GDP were, well, okay. They’d been better, but they didn’t suck. The numbers told us that we had recovered from the financial crisis of 2008. What’s the problem?

So it was that Trump managed to win the Electoral College, mostly because a whole lot of usually Democratic precincts in the Rust Belt went for him instead of Clinton.

I keep saying this, and I still think it’s true: The central message of the Democratic Party needs to be “under new management.” Or they won’t be able to capitalize on Trump’s economic vulnerability.

In politics the messenger is part of the message, which is why I think Joe Biden or any other long-time “establishment” Dem will be the wrong nominee in 2020, because he or she will have no credibility. Biden’s record as protector of credit card companies is a huge liability, for example.

These days Dems as a group have little credibility as the champions of the common man, and that’s their own fault. Do see Frank Rich, “In 2008, America Stopped Believing in the American Dream.” Under Obama, maybe the numbers recovered from the financial meltdown, but people did not. “Perhaps the sole upside to the 2008 crash was that it discredited the Establishment of both parties by exposing its decades-long collusion with a kleptocratic economic order,” Rich wrote. But I don’t think the Dem establishment understands this, even now. They’re still too busy being angry at Bernie Sanders because Hillary Clinton lost the general election.

5 thoughts on “When Numbers Lie”