We Americans sure do care about our rights, although it does seem some rights get more respect than others. And sometimes they cancel each other out.

Last year Alabama voters approved an amendment to the state constitution “declaring that the state’s policy to recognize and support the sanctity of unborn life, the rights of unborn children – including a right to life in all manners and measures appropriate and lawful – and that the Constitution does not protect the right to abortion or require the funding of abortion.”

On Monday, the country watched as 25 men in the Alabama state Senate voted to make abortion a felony in the state, without even an exception for survivors of rape or incest. Two days later, the bill was signed into law. This attack on women’s fundamental freedoms and agency is a blatant assault on constitutional and human rights.

But what happened in Alabama is not an anomaly—it is part of a decades-long, coordinated, all-out effort to erode women’s reproductive rights and freedom nationwide.

Clearly, here we have an example of two conflicting rights that cannot co-exist.

What are “rights,” anyway? The Equality and Human Rights Commission says “Human rights are the basic rights and freedoms that belong to every person in the world, from birth until death. They apply regardless of where you are from, what you believe or how you choose to live your life.” But Alabama has carved out a right that ends at birth, since it applies only to the “unborn.” And the Human Rifhts Commission still isn’t telling us what “rights” actually are.

Rights dominate modern understandings of what actions are permissible and which institutions are just. Rights structure the form of governments, the content of laws, and the shape of morality as it is currently perceived. To accept a set of rights is to approve a distribution of freedom and authority, and so to endorse a certain view of what may, must, and must not be done.

The encyclopedia entry goes on to discuss various kinds of rights and makes distinctions among things related to rights, such as liberties, immunities, powers, and privileges.

The Stanford Encyclopedia of Philosophy also says, “Human rights are norms that aspire to protect all people everywhere from severe political, legal, and social abuses. Examples of human rights are the right to freedom of religion, the right to a fair trial when charged with a crime, the right not to be tortured, and the right to education.” This article goes on to consider whether rights can always be inalienable and absolute.. Most philosophers have said, not really.

Maurice Cranston held that human rights are matters of “paramount importance” and their violation “a grave affront to justice” (Cranston 1967). If human rights did not have high priority they would not have the ability to compete with other powerful considerations such as national stability and security, individual and national self-determination, and national and global prosperity. High priority does not mean, however, that human rights are absolute. As James Griffin says, human rights should be understood as “resistant to trade-offs, but not too resistant” (Griffin 2008). Further, there seems to be priority variation within human rights. For example, when the right to life conflicts with the right to privacy, the latter will generally be outweighed.

A few years ago I wrote a post called Wrong About Rights that describes a time a woman was preparing to make a speech at the University of Utah and was receiving death threats. In particular, she was warned that if she didn’t cancel her speech she would be shot. Both the University of Utah and local law enforcement denied her request to bar firearms from the venue, because people had a right to carry firearms, after all. So the woman canceled the speech, and intimidation won. The right of audience members to carry firearms trumped her safety and right to make a speech.

Another one of my favorite examples is the famous time a man waving a firearm in a public park in Georgia caused the parents of Little League teams to pull their children off the field and into shelter. Police could do nothing, because the firearm-waving man had a right to wave a firearm.

In both circumstances, it seems to me that somehow the “right” to carry a firearm had been privileged over all other rights. And if we’re defining rights as “norms that aspire to protect all people everywhere from severe political, legal, and social abuses,” it seems to me that such privileging is enabling abuses.  When does a “right” cease to be a “right” and becomes a privilege that supercedes rights?

Proponents of House Bill 481 contend that life begins once an embryo’s heartbeat can be detected — at about six weeks, when it is about the size of one’s fingernail. And before most women even realize they’re pregnant.

Except there is no embryo or fetus in the “heartbeat” bill. There is only the “unborn child,” who would receive “full legal recognition” under Georgia law as “a natural person.” 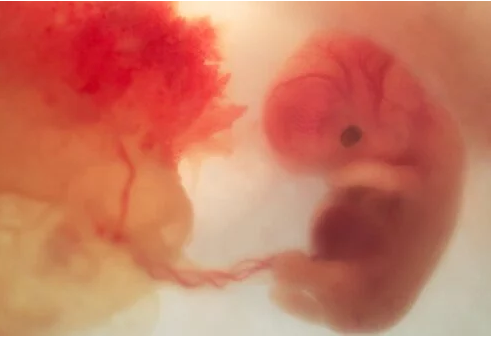 Human embryo at eight weeks’ gestation.  The embryo is less than an inch long and weighs less than 1/8 of an ounce.

But because this biological entity is to be privileged, rights must be stripped from girls and women, who do have hearts and brains and experiences. (Oh, and life doesn’t begin. It just is.) To extend a right to life to an entity that is not capable of liberty or the pursuit of happiness, we take those rights away from women.

In Wrong About Rights I wrote,

Awhile back the the late Ronald Dworkin, who was a professor of philosophy at New York University, compared the exercise of individual rights to playing a trump card. “Individual rights are political trumps held by the individuals,” he said. “Individuals have rights when, for some reason, a collective goal is not a sufficient justification for denying them what they wish, as individuals, to have or to do, or not a sufficient justification for imposing some loss or injury upon them.”

The problem is that we seem to have assigned trump status to some rights even when a greater good would be served by denying them.

At some point, it seems to me, the word “rights” became nearly meaningless. It’s just a trump card; this right trumps that one, because somebody says so. “Rights” these days are privileges or liberties given to particular groups, depending on who wins elections or who appoints judges. So the raped girl must carry the baby to term, the woman cancels her speech, and the children leave the park because their rights were trumped by someone, or something, else’s. Such “rights” were created by arbitrary political decisions and have little to do with “norms that aspire to protect all people everywhere from severe political, legal, and social abuses.” They’ve become more like “privileges politicians extend according to their own psychological bugaboos.”

8 thoughts on “When Rights Attack”