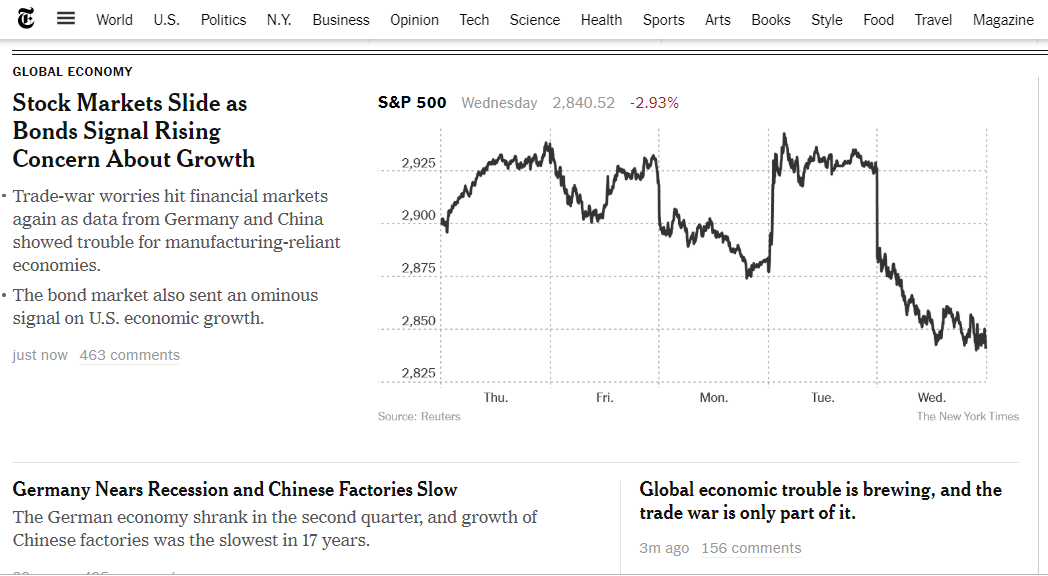 The global economy has begun to shudder.

On Wednesday, the U.S. stock market tumbled after a reliable predictor of looming recessions flashed for the first time since the 2008 financial crisis. The Dow Jones industrial average fell around 800 points, or 3 percent, and has lost close to 7 percent in the past three weeks.

Two of the world’s largest economies, Germany and the United Kingdom, appear to be contracting. Argentina’s stock market fell nearly 50 percent in recent days, and growth in China has slowed.

Whether the events presage an economic calamity or just an alarming spasm are unclear. But unlike during the Great Recession, global leaders are not working in unison to confront mounting problems and arrest the slowdown. Instead, they are increasingly at each other’s throats.

And President Trump has responded by both claiming the economy is still thriving while dramatically ramping up his attacks on Federal Reserve Chairman Jerome Powell, seeking to deflect blame.

I am not qualified to explain inverted yield curves, but that’s what spooked everybody today. I understand that Trump’s trade war with China is not the only factor causes financial tectonic plates to shift, but it’s a major one.

Since financial reporters tend to be buoyantly optimistic about the economy until the moment the electricity is cut off and the foreclosure papers are tacked to the door, I find it unsettling that one story after another solemnly warns it ain’t lookin’ good out there. There are always qualifiers — disaster may not fall — but they are falling short of buoyant optimism today. It’s more like cautious hopefulness mixed with just a hint of panic.

Which brings us to the wonderfully understated headline Could managing the economy be more complicated than Donald Trump thought?

Trump could not have been more wrong than when he insisted in 2018 that “trade wars are good, and easy to win.” His trade war is somewhere between a failure and a disaster, precisely because he thought it would be easy to win. “We’re learning that maybe China has a higher pain threshold than we thought here,” said Trump economic adviser Stephen Moore. You mean they wouldn’t just knuckle under and give us back all our jobs? Who could have predicted such a thing?

Well, anybody who knew anything could have predicted such a thing, but that leaves out Trumpsters.

That’s our short-term problem, but the long-term problem suggested by the study of CEO pay is that the economy has been and continues to be organized primarily for the benefit of those at the top. And if we do find ourselves in a recession, it may cause people to step back and realize that not only did Trump have no idea what he was talking about when it came to our immediate challenges, everything he has done will make inequality worse.

One thing we can say for sure is that whatever happens over the next year or two, economic policy turned out to be quite a bit more complicated than Trump thought. Of course, you could say that about almost any policy.

Trump has been tweeting frantically all afternoon, insisting that “Tremendous amounts of money pouring into the United States” (from where?) and about the “tremendous mistakes” of Federal Reserve Chair “Jay” Powell that are messing up his brilliant trade war that he would be winning otherwise.

I keep wondering when the money people will wise up and stop supporting this clown.