So the Creature actually tweeted this:

I had never heard of Wayne Allyn Root. Turns out he is a nutjob opinion writer:

Root, a longtime conservative columnist and radio host, has promoted a wide range of false conspiracy theories, including that President Barack Obama attended Columbia University as a “foreign exchange student,” that Democratic National Committee staffer Seth Rich was murdered by Democrats because he provided DNC files to WikiLeaks, that progressive donor George Soros hired the murderer of Charlottesville, VA, rally victim Heather Heyer, and that Supreme Court Chief Justice John Roberts’ 2015 Obamacare ruling might have been the result of him being “blackmailed or intimidated.”

Root has nonetheless received direct access to Trump and his family, whom he has partied with at the president’s Mar-A-Lago resort.

Of course. Back to Trump:

….like he’s the King of Israel. They love him like he is the second coming of God…But American Jews don’t know him or like him. They don’t even know what they’re doing or saying anymore. It makes no sense! But that’s OK, if he keeps doing what he’s doing, he’s good for…..

…..all Jews, Blacks, Gays, everyone. And importantly, he’s good for everyone in America who wants a job.” Wow! @newsmax @foxandfriends @OANN

“The last time ‘King of the Jews’ trended, things did not end well.” Charles Pierce

Fifty-three years ago, John Lennon said the Beatles were more popular than Jesus, and the Bible Belt erupted in outrage. Today? Not so much.

One of my Facebook friends says that for Dispensationalists, which conservative evangelicals often are, claiming to be as loved as Jesus in Israel puts Trump in serious Antichrist territory. I’ll take his word on that; I don’t care to look deeply into Dispensationalism. But will any of Trump’s evangelical supporters express concern about this? I’m not going to hold my breath until they do.

We need a cartoon of Trump and Franklin Graham throwing Jesus under a bus.

And then there’s the Greenland thing. Trump actually cancelled a visit to Denmark that was supposed to have happened around the first of September because the Danish prime minister told him flatly she wasn’t selling Greenland. Kevin Drum:

Can we finally start talking publicly about Trump’s mental state? This is the action of a child, not an adult in full control of his faculties. Everyone aside from Trump understood that his Greenland compulsion was a sign of cognitive regression in the first place, and this episode demonstrates that it was no passing fantasy. Trump took it seriously enough to treat Frederiksen’s comments as just another incitement to a feud with a political enemy.

The man is not well. I don’t care what you want to call his condition, but he’s not well. I can only shiver at the thought of what the folks who work regularly with Trump really think of him these days.

Greg Sargent thinks that it’s possible Trump is aware that Barack Obama is scheduled to visit Denmark in mid-September, and Trump is afraid the Danes will treat Obama better than him and make him look bad. But as a “most charitable” reason, that still smells out loud.

For the record, Denmark is only at 1.35% of GDP for NATO spending. They are a wealthy country and should be at 2%. We protect Europe and yet, only 8 of the 28 NATO countries are at the 2% mark. The United States is at a much, much higher level than that….

….Because of me, these countries have agreed to pay ONE HUNDRED BILLION DOLLARS more – but still way short of what they should pay for the incredible military protection provided. Sorry!

No, moron, the other NATO countries do not owe us protection money. NATO is not the Mob.

Oh, and Trump is now starting a war with the auto industry. He can’t understand why they aren’t grateful to him for getting rid of Obama emission standards. Instead of just reverting to manufacturing smog-emiting cars, automakers are agreeing to abide by standards passed by California that are, essentially, the Obama standards. The Trump Administration declared that states cannot set their own standards, but that is being challenged in court. The auto manufacturers probably realize that once Trump is gone the next president will reinstate the Obama standards, so there is no point retooling. But Trump is pissed.

My proposal to the politically correct Automobile Companies would lower the average price of a car to consumers by more than $3000, while at the same time making the cars substantially safer. Engines would run smoother. Very little impact on the environment! Foolish executives!

No, he’s not well. And perhaps the most dangerous thing the King of the Jews said yesterday was to call Jews “disloyal.” Dahlia Lithwick:

At a press conference on Tuesday, President Donald Trump released a tirade of nonsensical statements after he was asked whether the United States should reconsider its policies toward Israel after the country refused entry to two Muslim American U.S. congresswomen. His reply? “I can’t believe we’re even having this conversation. Where has the Democratic Party gone? Where have they gone where they are defending these two people over the state of Israel?” Trump said. “I think any Jewish people that vote for a Democrat, I think it shows either a total lack of knowledge or great disloyalty.”

Media accounts suggest it wasn’t exactly clear to whom Jews voting for a Democrat would be disloyal, but in context it appears that he was suggesting that Jews owe their first loyalty to Israel and that any choice to defend Reps. Rashida Tlaib of Michigan and Ilhan Omar of Minnesota—freshman Democrats who were first granted entry to Israel by the Benjamin Netanyahu’s government and then denied it after Trump suggested they be barred—is a choice not to defend Israel, where, according to Trump, Jews’ principal loyalty should lie.

This is not at all farfetched. Awhile back, in a speech to American Jewish Republicans, Trump referred to Benjamin Netanyahu was “your prime minister.” In Trump’s head, American Jews are not entirely American. This is dangerous. Some of Trump’s unhinged, gun-toting followers might take Trump’s “disloyalty” comments to mean that it’s time to shoot up another synagogue.

Jennifer Rubin notes that a number of prominent Democrats have criticized Trump’s words. And “Jewish groups — with the exception of the quisling Republican Jewish Coalition, which had the chutzpah to defend Trump — condemned the president,” she wrote.

However, we have yet to hear from Rep. Liz Cheney (R-Wyo.) or House Minority Leader Kevin McCarthy (R-Calif.), who claimed to be oh so concerned about anti-Semitism when the issue was statements by Omar. It comes as no surprise to anyone paying the slightest attention that their concern about anti-Semitism appears to be entirely situational.

He’s not well. Nancy Pelosi, please, do your job.

Update: Now he’s complaining the prime minister of Denmark was “nasty” to him. He’s escalating. 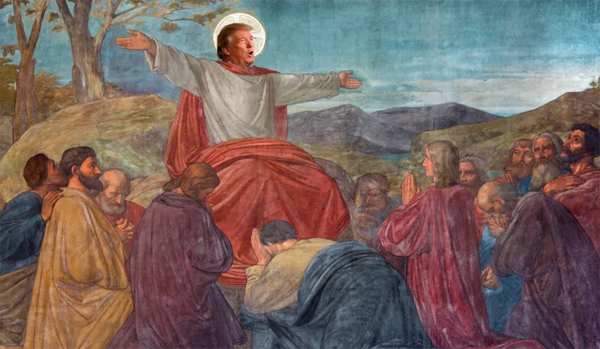 15 thoughts on “The Hard White Wall of Hypocrisy”