At first Trump might have thought the Hurricane Dorian thing was a lucky break, since it gave him an excuse to cancel a boring trip to Poland. It was doubly lucky because Trump was also supposed to meet with President Volodymyr Zelenskiy of Ukraine. Trump might have had to explain why he is holding up military aid meant to help Ukraine confront Russia. This was just a week after National Security Nutjob John Bolton assured Ukraine that U.S. aid would “intensify.” Oops! Trump sent Mike “the Weasel” Pence to bullshit on behalf of the administration instead.

So that business dispatched, Trump retreated to Camp David to monitor the hurricane. But Camp David is so boring. Nothing there but a driving range and a one-hole putting green. So on Saturday he took one of his taxpayer-funded helicopters to Trump National Golf Club in Potomac Falls, Virginia, to play 18 holes.

Still, there was that pesky hurricane thing going on he was supposed to be monitoring. On Sunday he had to sit through a boring FEMA briefing on the hurrican’s progress. Here he is attempting to pay attention. 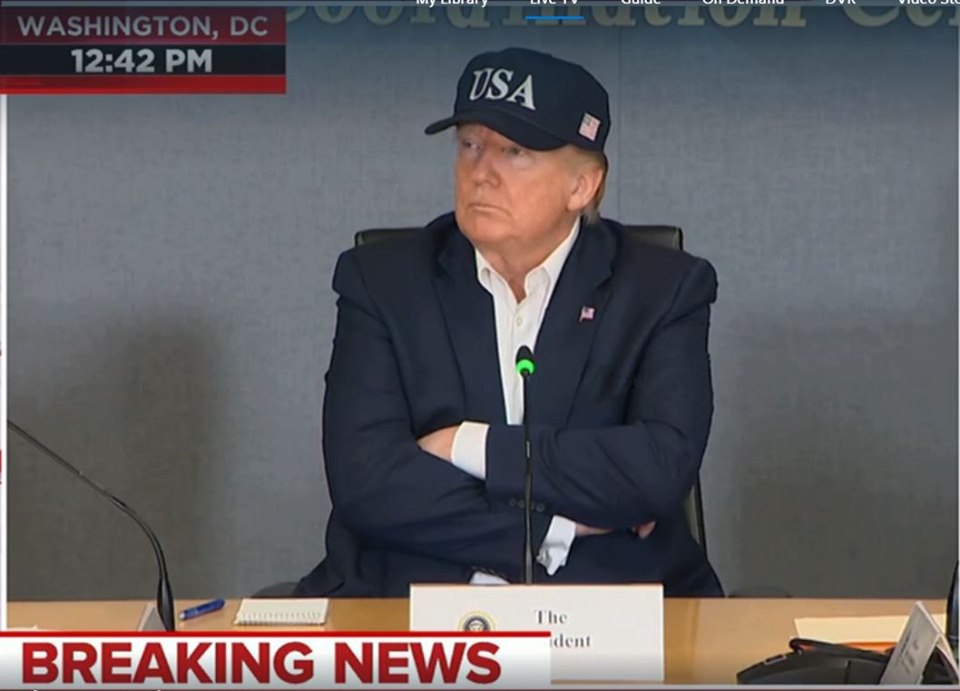 I mean, the only part of the briefing that appeared to interest him was whether the hurricane would likely make landfall on one of his properties in south Florida.

“Let me just ask you,” the president said, showing an unusual interest. “Two days ago we were given a really comprehensive briefing and they seemed to think, almost every prediction was that [the storm] was going to go right through Florida and into the Gulf — actually right across Florida.”

“Does that not have a chance of happening now?” he asked. “What do you think the chances that it goes directly straight as the original predictions were?”

When assured that most of the models showed the hurricane staying in the Atlantic and moving further north up the east coast, Trump went back to trying to fake attention. After the briefing he spoke some words in a bored monotone about people keeping safe. However, more than once yesterday he said that the hurricane could strike Alabama, which indicates he either doesn’t know where Alabama is or he still wasn’t grasping where the hurricane might actually go.

Trump also was baffled by the designation “category 5,” saying he’d never heard of such a thing, which is the same thing he said about Hurricane Irma and Hurricane Michael. Boring science stuff is boring.

Trump’s twitter feed today is full of National Weather Service hurricane projections, probably posted by White House staff. But over the weekend Trump let us know what was really on his mind, which was mostly a lot of petty grievances. For example —

I have not forgotten that when it was announced that I was going to do The Apprentice, and when it then became a big hit, helping NBC’s failed lineup greatly, @DebraMessing came up to me at an Upfront & profusely thanked me, even calling me “Sir.” How times have changed!

If you actually care why Trump is mad at Debra Messing, or if you can’t remember who Debra Messing is, here is the background.

But now Trump is supposed to pretend he cares about a monster hurricane that will impact a lot of little people he doesn’t know. So boring. However, it’s not 100 percent certain south Florida is out of harm’s way, in which case he might pay attention.

12 thoughts on “Being President Is Boring”