Naturally, the creature used his remarks on the anniversary of the 9/11 attacks to glorify himself.

I was looking out of a window from a building in Midtown Manhattan, directly at the World Trade Center, when I saw a second plane, at a tremendous speed, go into the second tower.  It was then that I realized the world was going to change.  I was no longer going to be — and it could never, ever be — that innocent place that I thought it was.

Soon after, I went down to Ground Zero with men who worked for me to try to help in any little way that we could.  We were not alone.  So many others were scattered around trying to do the same.  They were all trying to help.

He was allegedly in Trump Tower, on 5th Avenue between 56th and 57th streets. Trump Tower is said to have 58 floors. Trump has said he had a window that looked toward lower Manhattan and saw the planes strike the towers. Maybe. I’m skeptical he could have seen much, or anything, from that far away, about four miles. He has claimed elsewhere he could see bodies falling, but I was watching from West 17th street — a great deal closer — and I couldn’t see bodies falling.

But let’s say he could see that the towers were on fire from one of the upper floors in Trump Tower. I am more hysterical over the thought that the guy who made his mark on Manhattan real estate and Atlantic City casinos with the help of the mob ever thought the world was “innocent.”

The part about going to Ground Zero to help is complete bullshit, of course. He’s made these claims before; they’ve already been fact-checked.

Trump claimed that he assisted in cleanup efforts during the 2016 campaign. “Everyone who helped clear the rubble – and I was there, and I watched, and I helped a little bit – but I want to tell you: Those people were amazing,” Trump said.

Trump was near Ground Zero soon after the attacks took place, but the White House has not corroborated the claim that he helped clear out rubble.

Richard Alles, a New York Fire Department retired deputy chief, was on the scene after the attacks. He told us he “was there for several months” and had “no knowledge of (Trump) being down there.”

According to Richard Alles, a retired deputy chief with the New York Fire Department, Mr. Trump was not a presence at ground zero.

“I spent many months there myself, and I never witnessed him,” Mr. Alles, who was at the Rose Garden event on Monday, said in an interview. “He was a private citizen at the time. I don’t know what kind of role he could have possibly played.”

If he had been there at all, even for an afternoon, somebody would remember it. They don’t. Indeed, for several weeks after the attacks private citizens who had no official business at Ground Zero were kept at a distance from the site. Firefighters and NYPD and members of trained rescue organizations were there, but most of us couldn’t just show up and start helping. The work was too dangerous and required protective gear (of which the responders didn’t get enough). It is absolutely not possible that Trump and Trump employees actually did anything at Ground Zero, especially without people taking note of it at the time.

Back to Trump’s remarks:

I doubt that any “everyday citizens” were allowed to “race” into the towers while they were still standing to “rescue” anybody. Indeed, people who got out did so by walking down the stairs with their own feet. The only people “rescued” were a few people with severe burns who were sent away on ambulances while the towers were still standing, and the handful — twenty people, I believe — who survived the collapse. There really wasn’t a lot of rescuing. With that tragedy, you either were able to get yourself out, or you didn’t. This might seems like a minor quibble, and maybe it is, but it reflects the fact that Trump really doesn’t grasp what happened.

But we all do remember this:

On the day of the attack, Mr. Trump called into WWOR-TV to say that he had a window in Trump Tower that looked directly over the World Trade Center.

As the buildings burned, the show’s anchors praised his real estate prowess in a wide-ranging interview. Mr. Trump said that if he had decided to run for president in 2000, he would have taken a “hard line” on the perpetrators, and that he had “somebody down there” near the attack who had witnessed at least 10 people jumping out of the World Trade Center towers.

He also discussed a building he had in the area.

Also, Trump gave NO MONEY to 9/11 charities. This has been checked exhausitvely. Nor has he ever retracted his false claim that he saw “thousands and thousands” of Muslims in Jersey City cheering as the towers collapsed.

But now Trump has so corrupted the government he is bullying federal agencies to lie for him. And see especially Greg Sargent, “Trump’s war on truth just got a lot more cult-like.” 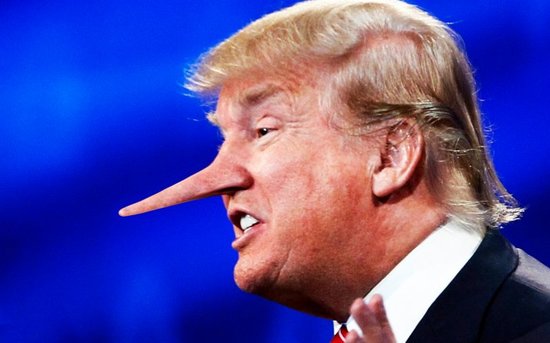 11 thoughts on “Trump: A Pathological Liar Who Lies”