So this happened today:

Acting White House chief of staff Mick Mulvaney told reporters Thursday that President Trump blocked nearly $400 million in military aid to Ukraine in part to force the government in Kyiv to investigate his political rivals, a startling acknowledgment after the president’s repeated denials of a quid pro quo.

Just now a teevee bobblehead described Mulvaney’s move as a “controlled burn.” A controlled burn, of course, is a fire deliberately set to achieve some land management purpose. In this case, the White House must have decided they aren’t going to get away with denying the quid pro quo any more, so they’ve gone on to the next excuse, that it was “appropriate.”

“Did he also mention to me in the past the corruption related to the DNC server? Absolutely, no question about that. But that’s it, that’s why we held up the money,” Mulvaney said, referring to a conspiracy theory that a hacked Democratic National Committee computer server was taken to Ukraine in 2016 to hide evidence that Kyiv, not Moscow, interfered in the last U.S. presidential election.

Mulvaney also said the funds had been withheld because European countries were being “really, really stingy when it comes to lethal aid” for Ukraine. But he characterized the decision to leverage congressionally approved aid as common practice, citing other instances in which the Trump administration has withheld aid to foreign countries and telling critics to “get over it.”

It may be that the Creature has been persuaded that people are figuring out the quid pro quo in spite of his vigorous denials. This week’s testimony to the House has clearly revealed Trump was running a “shadow” foreign policy through flunkies like Rudy Giuliani and Gordon Sondland to pressure Ukraine for personal help.

But notice what else Mulvaney discussed — “the corruption related to the DNC server,” or the insane conspiracy theory that the real scandal surrounding the 2016 election was that the Democrats colluded with Ukraine to interfere with the election and pin the blame on Russia. There have been many reports that Trump is obsessed with the idea that the famous “missing” DNC server — which is not, in fact, missing — is hidden in Ukraine somewhere, and that a California-based cybersecurity company called Crowdstrike had something to do with hiding it and stirring up a fake story about Trump colluding with Russia. That Mulvaney took pains to get this nonsense into the controlled burn tells me his statement today was made on Trump’s orders. See also Josh Marshall.

In Syria news — Mike “The Weasel” Pence announced today that Turkey’s president Erdogan has agreed to a five-day cease fire in Syria. This is to allow Kurds to withdraw from the strip of Syrian territory that Turkey is annexing for its own purposes. Basically, Trump just gave Erdogan everything he wanted. The moron thinks he has fixed the problem.

This is a great day for civilization. I am proud of the United States for sticking by me in following a necessary, but somewhat unconventional, path. People have been trying to make this “Deal” for many years. Millions of lives will be saved. Congratulations to ALL!

In remarks this afternoon, Tump heaped praise on Erdogan and said that no sanctions on Turkey would be necessary. As Jason Easley wrote at Politics USA, “Trump gushed about how wonderful and strong his ‘friend’ Erdogan was in allowing the US to surrender and give Turkey everything that it wanted.”

Trump babbles, gushes, and thanks his “friend” Erdo?an for allowing the US to surrender in disgrace. pic.twitter.com/rFZVoQFel6

The White House is saying the Kurds were in on the agreement; the Kurds say otherwise.

“Doral was far and away the best physical facility for this meeting,” Mulvaney said. He said that the administration examined 10 sites before choosing this one. Mulvaney quoted an anonymous site selection official who he said told him, “It’s almost like they built this facility to host this type of event.” Mulvaney did not say what other sites were vetted.

Of course he didn’t, since those sites don’t exist and the “anonymous site selection oficial” was Trump himself.

On any other news day I would have written about Trump’s meltdown during a meeting with Nancy Pelosi yesterday. But you know what happened. 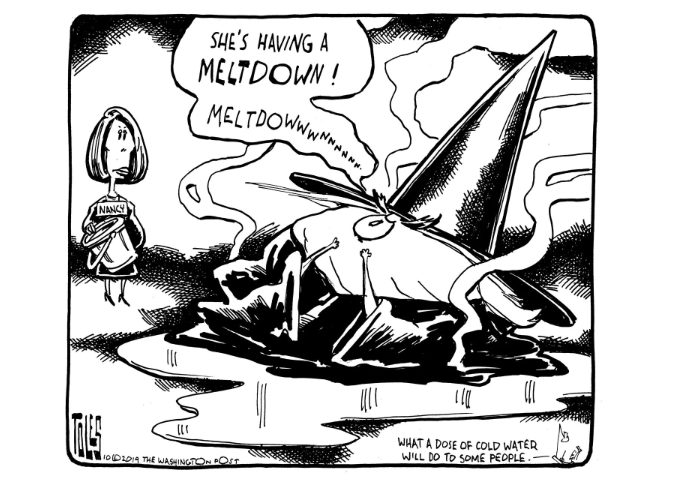 26 thoughts on “The Meltdown and the Controlled Burn”