This just in — Giuliani was in talks to be paid by Ukraine’s top prosecutor as they together sought damaging information on Democrats.

President Trump’s personal attorney, Rudolph W. Giuliani, negotiated earlier this year to represent Ukraine’s top prosecutor for at least $200,000 during the same months that Giuliani was working with the prosecutor to dig up dirt on vice president Joe Biden, according to people familiar with the discussions.

The people said that Giuliani began negotiations with Ukraine’s top prosecutor, Yuri Lutsenko, about a possible agreement in February. In the agreement, Giuliani’s company would receive payment to represent Lutsenko as the Ukrainian sought to recover assets he believed had been stolen from the government in Kyiv, those familiar with the discussions said.

The talks occurred as Giuliani met with Lutsenko in New York in January and then in Warsaw in February while he was also gathering information from Lutsenko on two topics Giuliani believed could prove useful to Trump: the involvement of Biden, and his son, Hunter, in Ukraine and allegations that Ukraine, not Russia, had interfered in the 2016 election.

The deal was drawn up but never finalized. Paul Waldman asks,

Why would Giuliani be simultaneously pursuing what former national security official Fiona Hill called a “domestic political errand” on Trump’s behalf — pressuring Ukraine to announce an investigation that would smear Joe Biden — while simultaneously looking to cash in himself?

The answer is, why wouldn’t he? It’s the Trump way. Josh Marshall:

If that’s not enough Joe DiGenova and Victoria Toensing, who were later hooked up for more than a million in legal fees from Dmitry Firtash, were also going to get put on retainer for hundreds of thousands.

If the names Joe DiGenova and Victoria Toensing look familiar — the married couple and law firm partners were active in the investigations into Bill Clinton/Monica Lewinsky, and they also were active in the right-wing smearing of Joe Wilson and Valerie Plame back in the day. More recently they were all over right-wing media pushing nutty stories about the alleged Benghazi scandal. They are long-time Republican dirty tricks operators, in other words. See Toensing and DiGenova Were Deeply Involved in Giuliani’s Extortion Racket by Nancy LeTourneau at Washington Monthly.

Back to Josh Marshall:

It’s one more piece of a larger story which has already become fairly clear: Giuliani running private diplomacy for the President’s financial and political interests and charging virtually everyone whose path he crossed fees for access to the President and the power Giuliani seemed to have over US policy. The work for the prosecutor’s office would have been nominally for reclaiming looted assets for Ukraine. But given Giuliani’s MO this is likely more properly seen as cover for either protection money or payment for access or at best using access to achieve these ends by access to Trump. Giuliani tried to get one Turkish client out of legal trouble by trying to arrange a diplomatic exchange. So extra-legal assistance made possible by his access to Trump.

Zoom out and you have a broad access scheme in which Giuliani uses his status as the President’s personal lawyer (for which he apparently charges nothing) to charge fees to a international cast of oligarchs, mobsters and crooked politicians for access to the President. All the while US foreign policy becomes a mix of the President’s personal interests and the angles of whoever happens to be paying Giuliani the most at that moment.

Yeah, who is paying Giuliani at the moment? Is it possible Trump expected him to self-finance all this traveling overseas on Trump’s behalf? The oligarchs on the edges of this case have been paying Rudy and DiGenova/Toensing pretty handsomely. For example,

In the case of Mr. [Dmitry] Firtash, an energy tycoon with deep ties to the Kremlin who is facing extradition to the United States on bribery and racketeering charges, one of Mr. Giuliani’s associates has described offering the oligarch help with his Justice Department problems — if Mr. Firtash hired two lawyers who were close to President Trump and were already working with Mr. Giuliani on his dirt-digging mission. Mr. Firtash said the offer was made in late June when he met with Lev Parnas and Igor Fruman, both Soviet-born businessmen involved in Mr. Giuliani’s Ukraine pursuit.

Mr. Parnas’s lawyer, Joseph A. Bondy, confirmed that account and added that his client had met with Mr. Firtash at Mr. Giuliani’s direction and encouraged the oligarch to help in the hunt for compromising information “as part of any potential resolution to his extradition matter.”

Mr. Firtash’s relationship to the Trump-allied lawyers — Victoria Toensing and Joseph diGenova — has led to intense speculation that he is, at least indirectly, helping to finance Mr. Giuliani’s campaign. But until now he has stayed silent, and many of the details of how and why he came to hire the lawyers have remained murky.

In the interview, Mr. Firtash said he had no information about the Bidens and had not financed the search for it. “Without my will and desire,” he said, “I was sucked into this internal U.S. fight.” But to help his legal case, he said, he had paid his new lawyers $1.2 million to date, with a portion set aside as something of a referral fee for Mr. Parnas.

If you watch Rachel Maddow even once in a while, the name “Firtash” ought to be familiar. She brings up the name a lot in her soliloquies. See Robert Mackey/The Intercept, Is a Ukrainian Oligarch Helping Trump Smear Biden to Evade U.S. Corruption Charges? and Dan Friedman/Mother Jones, How an Indicted Oligarch Became a Key Player in Trump’s Ukraine Scandal.

So, while the basic Trump-Ukraine scandal may be relatively simple by itself, it is a piece of a much bigger and more complex pattern of corruption and self-dealing surrounding Trump.

But back to Rudy. Let us remember there is all kinds of credible testiomony that Trump directed his aides and others to go through Rudy Giuliani in dealing with Ukraine. Giuliani came up a lot in the infamous July 25 phone call “transcript” that Trump wants everyone to read, such as this bit, spoken by Trump:

Mr. Giuliani is a highly respected man. He was the mayor of New York City, a great mayor, and I would like him to call you. I will ask him to call you along with the Attorney Geneeral. Rudy very much knows what’s happening and he is a very capable guy. If you could speak to him that would be great.

This was after a section in which President Zelensky reassured Trump that an aide had already spoken to Rudy Guiliani and that he and his staff were looking forward to meeting him. So we’re well past the point at which Trump can credibly claim he wasn’t directing Rudy to do something concerning Ukraine. And in the context of the transcript it’s obvious part of that something was an investigation of the Bidens.

But of course, that’s what Trump did.

President Donald Trump has now denied that he directed his personal lawyer Rudy Giuliani to go to Ukraine and seek out investigations on his behalf, contradicting his own words to the Ukrainian President in the White House-released transcript of the July 25 call.

Trump also contradicted sworn testimony from members of his administration and claims from his own White House acting chief of staff.

Ahead of a Tuesday night rally in Florida, Trump was asked by conservative radio host Bill O’Reilly if the President directed Giuliani’s involvement in Ukraine.

“No,” the President said, before launching into a tangent of flattering Giuliani’s credentials, calling him “a great corruption fighter” and “the greatest mayor” of New York City.

We also now have reports that Trump was briefed on the whistleblower complaint in late August, before he ordered the release of the militayr aide. For a recap of the story thus far, I turn to Charles Pierce:

Now we have the whole thing. The president* used military aid money already appropriated by Congress to shakedown the government of Ukraine, an ally, in order to get Ukraine to help him ratfck one of his prospective opponents in the 2020 presidential election. As last week’s testimony confirmed, everyone in this massive loop knew this at the time. Then someone, and we still don’t know who, took a complaint to the intelligence community’s inspector general. This was at the end of July. And, by August, they had briefed the president*, who, having been caught borscht-handed, released the aid in early September. Every episode in that chronicle is an impeachable offense, and the entire timeline is one very big one.

Remember what Rep. Adam Schiff said last week, when the Republicans on the House Intelligence Committee tried to argue that nothing untoward had happened because the president* eventually released the aid?

“My Republican colleagues, all they seem to be upset about with this is not that the president sought an investigation of his political rival, not that he withheld a White House meeting and $400 million in aid we all passed in a bipartisan basis to pressure Ukraine to do those investigations. Their objection is that he got caught. Their objection is that someone blew the whistle, and they would like this whistleblower identified, and the president wants this whistleblower punished. That’s their objection. Not that the president engaged in this conduct, but that he got caught.”

Now, even that most threadbare irrelevancy is denied to all but the most fervent members of the cult. The president* released the aid because his lawyers told him he’d been caught. On this matter, at least, the case is airtight, and there is no daylight to be found. The president*, among others, is stone busted. That may matter. It may not. But anyone arguing for the defense on the Ukraine matter is bound to look like even more of an idiot than they already do, and those people look like the succulent, ripe fruit of the Stupid Tree already. That’s something, anyway.

Not that any of this will stop Republicans from covering Trump’s ass. 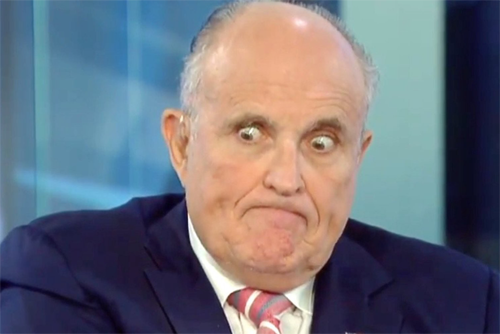 7 thoughts on “The Further Adventures of Rudy”