Sorry I’ve been absent for a while. This is the first day I’ve had since Wednesday that wasn’t completely scheduled. And last Wednesday Thomas Edsall wrote a column I’ve been itching to comment on, and now I can finally do it.

When Attorney General William Barr warned in a speech at Notre Dame on Oct. 11 that secular liberalism had unleashed “licentiousness — the unbridled pursuit of personal appetites at the expense of the common good,” there was a glaring incongruity.

How could Barr possibly fail to recognize that there is no better example of a man in unbridled pursuit of his own appetites than his boss?

Barr’s hypocrisy aside, his commentary — “the campaign to destroy the traditional moral order has brought with it immense suffering, wreckage and misery. And yet, the forces of secularism, ignoring these tragic results, press on with even greater militancy” — is part of a renewed drive by social conservatives to demonize liberal elites. 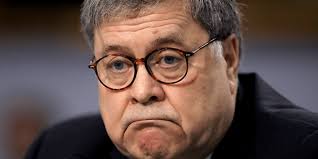 Now, we’ve all been hearing this crap for years, right? I remember Pat Buchanan’s “culture war” speech at the 1992 Republican National Convention, which I watched because I was too tired to get up off the sofa and change the channel. Buchanan said then,

My friends, this election is about more than who gets what. It is about who we are. It is about what we believe, and what we stand for as Americans. There is a religious war going on in this country. It is a cultural war, as critical to the kind of nation we shall be as was the Cold War itself, for this war is for the soul of America.

I don’t know where Barr stands on women in combat, but otherwise Barr 2019 and Buchanan 1992 are pretty much on the same page. As near as I can tell from his web site, Buchanan is a Trump supporter now, which is no big surprise.

Edsall goes on to note that the rightie think tank crowd has been cranking out lots of books lately with standard rightie think tank book titles like Straight to Hell: How Liberals are Evil and Destroying America and Want to Eat Your Babies. (That’s not much of an exaggeration.)

Anyway, I take it that these people blame the decline of the influence of organizeed religion (“secularism” in shorthand), the sexual revolution (remember when that was a thing?), feminism, birth control and legal abortion on an “explosion” in the rates of divorce and single parent households, which usually means just mother, no father. And, of course, children who grow up without fathers are doomed to be criminals and layabouts. And speaking of layabouts, how about that welfare state that discourages people from working?

In a 2015 study, Pew, a liberal think tank, reported that the percentage of children under 18 living with two parents in their first marriage fell from 73 percent in 1960 to 46 percent in 2014.

And then there is the fact that it is the well-educated, often secular liberal elites so detested by social conservatives who are reviving the traditional two-parent family, with declining divorce rates and a commitment to combine forces to invest in their children.

Wait, what? Liberal elites are reviving the two-parent family? Yes, indeed. The terrible irony that the Barrs and Buchanans fail to note is that the satanic trends of high divorce rates and out-of-wedlock births that they blame on liberalism has seen the biggest “explosion” in the very demographic group least likely to support liberalism: The white working class. Get this:

In the 1980s, at the height of the divorce revolution, there was virtually no difference in the divorce rates of women and men by level of education.

Note also that the overall divorce rate has fallen considerably since Pat Buchanan made the culture war speech. This shows us 1990 to 2017. 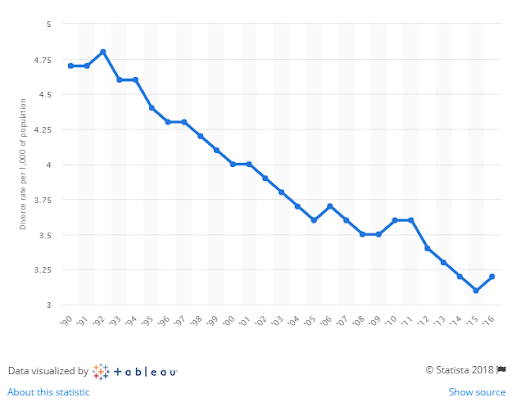 This article argues that part of the change is the result of millennials marrying later, and making better choices, than we geeezers did back in the day. And this survey from Pew shows that these same millennials score higher on social liberalism and lower on God-believing than the geezers, also. But, as noted above, the less educated you are, the more likely it is you will divorce.

You might remember that back in 2004 the Gee Dubya Bush Administration made a big splash with its “healthy marriage” initiative, in which a ton of money was allocated for “training to help couples develop interpersonal skills that sustain ‘healthy marriages.”’ This desire to prop up marriage followed shortly after the supreme court of Massachusetts ruled that gay couples had a right to marry, so there’s that. But part of the righrtie argument for promoting marriage is that it would reduce poverty; those single, unmarried people tended to be poorer than those who married and stayed married. Married couples are more affluent and financially stable, so, obviously, if poor people got married they also would be more affluent and financially stable.

Of course, as is often the case, the righties mixed up cause and effect. Affluent and financially stable people are much more likely to marry and stay married than those who are not. Poverty is enormously stressful, which makes it hard for the very poor to sustain a relationship. It wasn’t a lack of marriage causing poverty but too much poverty discouraging marriage.

You will not, then, be surprised to learn that the healthy marriage initiative was a dismal failure. Stephanie Mencimer wrote for Mother Jones in 2012,

With congressional Republicans beating the drum about profligate and wasteful government spending, they may want to take a hard look at a federal program pushed by a host of top GOPers during the Bush-era and reauthorized in late 2010, as the Republican deficit craze took hold. Originally championed by Republican lawmakers including Iowa Sen. Chuck Grassley, former Pennsylvania Sen. Rick Santorum, and current Kansas Gov. Sam Brownback, a federal initiative to promote marriage as a cure for poverty dumped hundreds of millions of dollars into programs that either had no impact or a negative effect on the relationships of the couples who took part, according to recent research by the Department of Health and Human Services (HHS).

One part of the program offered marriage education classes to unmarried couples with children.

Three years later, researchers reported that the program had produced precisely zero impact on the quality of the couples’ relationships, rates of domestic violence, or the involvement of fathers with their children. In fact, couples in the eight pilot programs around the country actually broke up more frequently than those in a control group who didn’t get the relationship program. The program also prompted a drop in the involvement of fathers and the percentage who provided financial support.

To be fair, it wasn’t all that bleak.

In a few bright spots, married couples who participated in a government-funded relationship class reported being somewhat happier and having slightly warmer relationships with their partners. But the cost of this slight bump in happiness in the Supporting Healthy Marriage program was a whopping $7,000 to $11,500 per couple. Imagine how much happier the couples would have been if they’d just been handed with cash. Indeed, feeling flush might have helped them stay married. After all, the only social program ever to show documented success in impacting the marriage rates of poor people came in 1994, when the state of Minnesota accidentally reduced the divorce rate among poor black women by allowing them to keep some of their welfare benefits when they went to work rather than cutting them off. During the three-year experiment and for a few years afterward, the divorce rate for black women in the state fell 70 percent. The positive effects on kids also continued for several years.

Wait, what? You mean that you can actually help poor families by just giving them money? What would Paul Ryan say?

Thomas Edsall contacted a number of scholars who study social disruptions like exploding divorce rates and what causes them. On the whole, they said the effects of liberal ideology and “secularism” on such disruptions can’t be proved or disproved. What they can measure, however, is the impact of changing social and economic conditions on working class men. One academic said,

My read of the evidence is that the declining economic position of less educated men (both in a relative and absolute sense) has probably been a key driver of the breakdown of the two-parent family among less educated populations for many decades.

… sharp declines in the availability of middle class jobs for non-college workers (esp. men) — for example, when China joined the World Trade Organization in 2001 and U.S. manufacturing employment fell by 20 percent in seven years — causes exactly these maladies on which these commentators are focused: a drop in labor force participation, a decline in marriage rates, a rise in the fraction of children born out of wedlock, an increase in mother-headed households, a rise in child poverty, and a spike in ‘deaths of despair’ among young adults, particularly men, stemming from drug and alcohol abuse, suicide, and other arguably self-inflicted causes.

There is copious data that an when wages rise and new jobs open up, the rates of out of wedlock births drop considerably. But now that not marrying has become the norm in much of the white working class, the out of wedlock problem may not go away so quickly. Edsall:

You see the picture. It’s also the case that the researchers pooh-poohed the idea that social safety net programs increased social disruption. Looking worldwide, we can see that countries with the most generous social welfare programs have the least disruptions.

And, again, it’s the white working class — Trump’s people– who are being hit the hardest by the disruptions. Another academic:

Put another way, the white working class — the segment of the population with the weakest ties to, if not outright animosity toward, liberalism, feminism and other liberation movements — has, in recent years, experienced the strongest trends toward social decay.

Or look at it this way: The white working class constituency that would seem to be most immune to the appeal of the cultural left — the very constituency that has moved more decisively than any other to the right — is now succumbing to the centrifugal, even anarchic, forces denounced by Barr and other social conservatives, while more liberal constituencies are moving in the opposite, more socially coherent, rule-following, direction.

I would also like to point out that in the endless argument about whether Trump support in the white working class is caused by racism or economic anxiety, I once again say, both.

But now the culture warriors have mounted what might — I hope — be their last offensive. And they have focused their hopes on a walking cesspool of corruption and ignorance called Donald J. Trump. Trump is to virtue what a black hole is to matter. He is utterly lacking in any redeeming qualities. And the culture warriors like Barr are reduced to lying, scheming, and probably commiting impeachable acts themselves to protect Trump’s position. And they see themselves as pure and noble knights trying to save civilization of the threat of liberalism.

The capacity of humans to self-bullshit knows no limits.