I’ve assumed Joe Biden would be the nominee for several weeks now, so it wasn’t that much of a letdown when Bernie Sanders announced he was ending his campaign. Yes, it’s too bad that an absolute mess of a nomination process has given us just about the least-suited nominee for our political moment from among the field that started out. A damn shame. But let’s go on.

I suspect Biden will win — or, at least, that Trump will lose — barring unforeseen events. Let us not forget that Trump won the electoral college with only 80,000 votes in three states. Trump hasn’t expanded his base, and he’s not going to get all of his original voters back. Current polls have Biden slightly ahead in Wisconsin, Michigan, Pennsylvania, and Florida, states that were critical to Trump’s win in 2016.

It’s no time to be complacent, of course, especially considering the tricks Republicans are going to pull to suppress the vote.

Trump’s approval numbers improved in mid-March as the pandemic crisis heated up, but now they are tumbling back to earth. Quinnipiac released a new poll today:

A plurality of voters gives the president a failing grade on the way he has communicated information about the coronavirus to the American people:

25 percent give Trump an A;

Dr. Anthony Fauci received the highest approval rating, followed by “your state’s governor.” Who did worse than Trump? Congress.

Right now there are still large parts of the country — mostly rural, mostly southern and midwestern, mostly Trump voting — that aren’t fully accepting the seriousness of our situation. But that is changing fast.

A new wave of coronavirus cases is spreading deep into rural corners of the country where people once hoped their communities might be shielded because of their isolation from hard-hit urban centers and the natural social distancing of life in the countryside.

The coronavirus has officially reached more than two-thirds of the country’s rural counties, with one in 10 reporting at least one death. Doctors and elected officials are warning that a late-arriving wave of illness could overwhelm rural communities that are older, poorer and sicker than much of the country, and already dangerously short on medical help.

It appears that just as the urban areas will begin to see fewer new cases, the rest of the U.S. will be seeing more and more cases. And rural America especially is not equipped for this. Hospitals are far apart. A majority of rural counties don’t have a single ICU bed.

“We’re behind the curve in rural America,” said Senator Jon Tester, Democrat of Montana, who said his state needs hundreds of thousands of masks, visors and gowns. “If they don’t have the protective equipment and somebody goes down and gets sick, that could close the hospital.”

Rural nurses and doctors, scarce in normal times, are already calling out sick and being quarantined. Clinics are scrambling to find couriers who can speed their coronavirus tests to labs hundreds of miles away. The loss of 120 rural hospitals over the past decade has left many towns defenseless, and more hospitals are closing even as the pandemic spreads.

Coronavirus illnesses and deaths are still overwhelmingly concentrated in cities and suburbs, and new rural cases have not exploded at the same rate as in some cities. But they are growing fast. This week, the case rate in rural areas was more than double what it was six days earlier.

Meanwhile, Trump’s “leadership” of the coronavirus continues to consist of temper tantrums, blame, and shilling hydroxychloroquine. I agree with Paul Waldman that the real reasons for Trump’s fixation on the unproven coronavirus therapy have more to do with politics than profit.

The most important factor is that he’s desperate, he wants to come out of this a hero and it’s the only drug he’s heard of that might give him the opportunity.

The election is seven months away. We’re facing a public health crisis that could kill hundreds of thousands of Americans, and the economy has been put into a medically induced coma. Even if our social distancing measures are successful and we can restart somewhat normal life in a couple of months, it may take years for the economy to fully recover.

And even before the pandemic, Trump’s chances at reelection were probably 50-50, given his historic unpopularity and the steady demographic shifts that have made the country even younger and more diverse than it was four years ago when he squeaked out an electoral college victory despite getting 3 million fewer votes than his opponent. …

…If Trump can claim that he personally defeated covid-19, then he might just win. If hydroxychloroquine somehow turns out to be an effective treatment, he can point to all the time he spent promoting it while others were skeptical and say, “I did it, America. I saved all your lives, because I’m a genius and the so-called experts are idiots.”

That is the outcome Trump is hoping for. Is it spectacularly unlikely? Of course. But at this point it may be his only hope of reelection.

There’s a lot about Biden that is objectionable, but the two factors Republicans will try to smear him with — that he suffering dementia and HUNTER BIDEN MADE MONEY IN UKRAINE are not likely do the same damage as the damn emails. One, Joe Biden can still speak in complete sentences, a skill that eludes Trump. Two, besides the fact that I think the Hunter Biden claims are old and tired, the self-dealing adventures of Ivanka, Jared, Junior, and Eric make Hunter seem a model of financial rectitude. And I dare Republicans to make anything of the recent accusations of sexual assault, given Trump’s history in that area.

So, while I have no enthusiasm for Biden whatsoever, neither am I too concerned that he’s a weak candidate compared to Trump. Biden’s strength is that he can exude empathy and nice-guyness, which may be just the thing people will be hungry for after four years of Trump. Second, I think by November a majority of Americans will vote for a bleeping gerbil to get rid of Trump. Maybe not a big majority, but a big-enough majority. 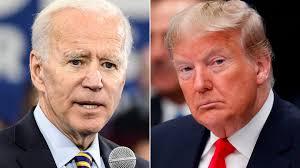 8 thoughts on “Politics and Pandemics: It’s Going to Be Biden”