Here are a couple of articles to read together. First, see David W. Blight, Europe in 1989, America in 2020, and the Death of the Lost Cause at The Atlantic. I would seriously love to round up everyone complaining that toppling Confederate statues is “erasing history” and rub their noses in what Blight wrote here.

The Lost Cause is, of course, a mythology that grew in the South after the Civil War. And at the hands of generations of Southern historical scholars, the mythology supplanted the real history of the war, as well as the real history of slavery, Reconstruction, Jim Crow, and a lot of other things. The Lost Cause denied that the primary — and secondary, and tertiary — reason so many slave states seceded and formed the Confederacy was to protect the institution of slavery. Instead, the myth insisted, the Civil War was fought to preserve some noble, agrarian way of life that was principled and free. Seriously. And this way of life was ripped away from the poor victimized South by those dirty northern industrialists for some vague reason that never made coherent sense. And if you know anything at all about the real history, you know what a pile of excréments de taureau that is.

New Orleans Mayor Mitch Landrieu found a document in the National Register of Historic Places that explains the Lost Cause pretty well. It said:

The Cult of the Lost Cause had its roots in the Southern search for justification and the need to find a substitute for victory in the Civil War. In attempting to deal with defeat, Southerners created an image of the war as a great heroic epic. A major theme of the Cult of the Lost Cause was the clash of two civilizations, one inferior to the other. The North, “invigorated by constant struggle with nature, had become materialistic, grasping for wealth and power.” The South had a “more generous climate” which had led to a finer society based upon “veracity and honor in man, chastity and fidelity in women.” Like tragic heroes, Southerners had waged a noble but doomed struggle to preserve their superior civilization. There was an element of chivalry in the way the South had fought, achieving noteworthy victories against staggering odds. This was the “Lost Cause” as the late nineteenth century saw it, and a whole generation of Southerners set about glorifying and celebrating it.

David Blight, who is the Sterling Professor of History at Yale University, takes that a bit further:

The Lost Cause argued that the Confederacy never fought to preserve slavery, and that it was never truly defeated on the battlefields of glory. Lost Cause spokesmen saw the Confederacy as the real legacy of the American Revolution—a nation that resisted imperial and centralized power, and which could still triumph over rapid urbanization, immigration, and strife between labor and capital. Above all, the Lost Cause seductively reminded white Americans that the Confederacy had stood for a civilization in which both races thrived in their best, “natural” capacities. The slaughter of the Civil War had destroyed that order, but it could be remade, and the whole nation, defined as white Anglo-Saxon, could yet be revived.

It didn’t take a lot of mutation for the Lost Cause myth to become the right-wing politics that infect us today. I would argue that most right-wing nuttiness of today is the result of the Lost Cause getting mingled into Red Scares/McCarthyism and evangelical premillennialism. And, unfortunately, that nonsense spread everywhere and wasn’t limited to the South.

As I’ve written here before, most of the Confederate monuments in the U.S. were erected in the early 20th century, a time in which the Lost Cause myth had reach cult proportions. This perod also coincided with the First Red Scare. The Confederate officers so enshrined were depicted as dashing, patriotic gentlemen heroes, nobly defending their “way of life” from the rapacious, freedom-killing federal government.

The 1920s also saw the revival of the Ku Klux Klan. This is all of a piece. Those who embraced the Lost Cause myth also came to lump eastern European immigrants, labor unions, communism, big cities generally, any form of religion that was not Christian fundamentalism, and egghead college-educated northeastern elites into the same pot.

From the eighteen-nineties through the First World War, as Jim Crow laws and practices spread across Southern states, and as lynching became a ritual of terror and control, it was organizations like the U.D.C. and U.C.V. that placed hundreds of monuments, large and small, all over city squares and town centers. By 1920, virtually no one in the South, black or white, could miss seeing a veterans’ parade, or a statue of a Confederate soldier leaning on his musket with sweet innocence and regional pride. Schools, streets, and parks were named for Confederates. And, at one dedication after another, the message sent to black Southerners was that the Lost Cause was no longer lost. It had, instead, become a victory narrative about the overturning of Reconstruction and the reëstablishment of white supremacy. The myth had become the ruling regime, which governed by law and by violence, and because it controlled the story. What’s more, the nation largely acquiesced to, and even applauded, this dogged Southern revival.

I could go on and on, but the short version of this is that the Lost Cause myth is a pile of historical revisionist nonsense that squeezed out real history, and I honestly believe it has to die and be replaced by real history before the poison it represents can be excised. That’s a big reason I am all in favor of getting rid of Confederate monuments, except arguably the very few that mark the spot of some real historical event. Most of them have nothing to do with history; they are totems of the Lost Cause. It also means we need to squeeze what’s left of the myth out of American schools and textbooks, and as much as possible, jeer it out of popular culture. Zero tolerance, I say. We won’t have a manageable, inclusive nation until we accomplish this.

If you can get past the Atlantic firewall (I think they give you a couple free articles every month, if you don’t subscribe), it’s very much worth reading Blight’s essay all the way through. But now I want to move on to the other article of note and a more recent byproduct of the Lost Cause — the Southern Strategy.

With one poll after another showing Joe Biden leading him by double digits, President Trump is in a precarious situation. So he has apparently decided that the way for him to prevail is to squeeze one more election out of the Southern Strategy, the one that has delivered the White House to Republicans so many times over the past half-century.

The problem is that he’s been trying to milk that strategy for political success since he took office, without anything to show for it. When we look back, we may well realize that there was indeed one last presidential election that could be won on white racial resentment — but that election happened in 2016.

Donald Trump of Queens, a second-generation American without family history of American military service, whose forebears were all in Europe when the Civil War happened, has embraced the Lost Cause, it appears. He probably doesn’t know exactly what it is, but he knows it’s somehow associated with winning votes in the South and anywhere one finds pickup trucks festooned with Confederate battle flags. He’s adopted  the memory of Confederate generals as the hill he’s going to defend, at least for now.

I will Veto the Defense Authorization Bill if the Elizabeth “Pocahontas” Warren (of all people!) Amendment, which will lead to the renaming (plus other bad things!) of Fort Bragg, Fort Robert E. Lee, and many other Military Bases from which we won Two World Wars, is in the Bill!

The Confederate generals, of course, had nothing to do with winning the world wars, a point Trump might not understand. Waldman continues,

Warren’s amendment to the bill funding the military, which would begin the process of removing the names of Confederate leaders from American bases, was approved on a voice vote last month by the Senate Armed Services Committee, which is controlled by Republicans; the larger bill was then approved by 25 to 2.

It seems that even in the president’s own party, there is a growing realization that just as American soldiers don’t train at Fort Himmler or Fort Tojo, it’s obscene for military bases to be named for men who committed treason against the United States in order to maintain slavery.

And on the same day that Trump was proclaiming his commitment to defend Confederate iconography, Mississippi became the last state to remove a Confederate emblem from its state flag. Mississippi Sen. Roger Wicker, who’s not exactly a liberal, personally oversaw the removal of the old Mississippi flag in the Capitol and posed for pictures to commemorate the historic event.

Waldman argues that Trump is going to makes his appeals to divisiveness and racism more and more explicit as the campaign continues, because that’s all he knows how to do. This is tearing the old Republican coalition apart, because a lot of college-educated and surburban Republicans like their racism in more coded and genteel forms, thank you very much.

But it’s also the case that an all-white party is not going to survive the 21st century. One suspects even Mitch McConnell knows that. Republicans have been mumbling to each other for years that they really need to expand their base to include more racial minorities. But they’ve become too dependent on racist dog whistling as a cheap and easy way to win elections. And they can’t have both.

If Trump loses in November, Waldman argues, it may kill the Southern Strategy for all time. Maybe. In presidential elections, anyway. It may take a bloodbath at the congressional level to really kill it. Well, we can hope. If NASCAR is banning Confederate flags, that tells us the Lost Cause has lost considerable legitimacy.

And if the Lost Cause myth doesn’t die pretty soon, I don’t see how the U.S. will avoid becoming an international pariah, an economic has-been, and a third-world shit hole. 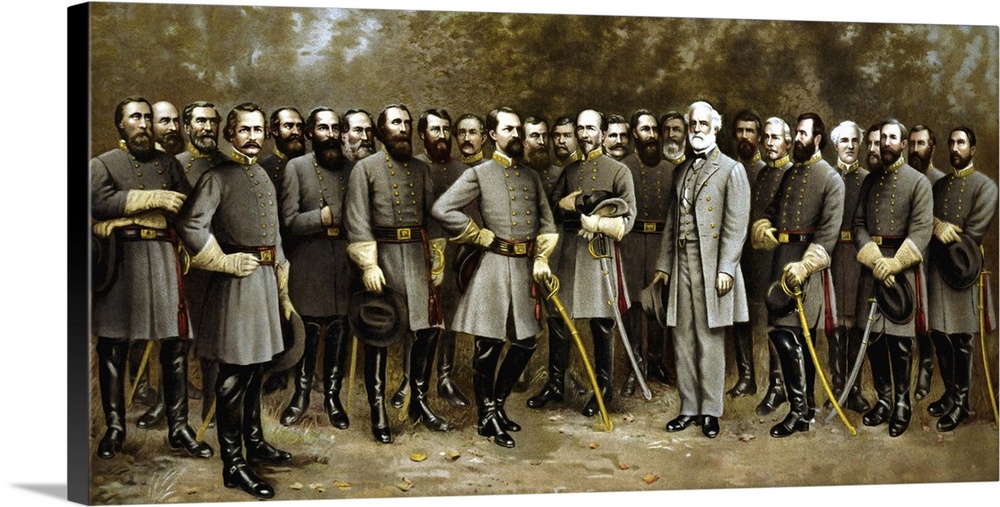 11 thoughts on “The Last Hurrah of the Lost Cause?”