Last night, Oregon Attorney General Ellen Rosenblum filed a lawsuit in federal court against “the United States Department of Homeland Security, the United States Marshals Service, the United States Customs and Border Protection, the Federal Protection Service and their agents alleging they have engaged in unlawful law enforcement in violation of the civil rights of Oregonians by seizing and detaining them without probable cause,” it says here.

Protests against systemic racism and police brutality have been a nightly feature in deeply liberal Portland since Minneapolis police killed George Floyd on May 25. President Donald Trump has decried the disorder and Homeland Security Secretary Chad Wolf blasted the protesters as “lawless anarchists” in a visit to the city, helping make the clashes between police and demonstrators a national focus.

The administration has enlisted federal agents, including the U.S. Marshals Special Operations Group and an elite U.S. Customs and Border Protection team based on the U.S.-Mexico border, to protect federal property. But Oregon Public Broadcasting reported this week that some agents had been driving around in unmarked vans and snatching protesters from streets not near federal property, without identifying themselves.

The Governor Kate Brown of Oregon and the ACLU have denounced the presence of whatever sort of federal law enforcement officers/troops/thugs have been pulling people off the streets in Portland without identifying themselves or giving a reason.

Portland Mayor Ted Wheeler has demanded that Trump “Keep your troops in your own buildings, or have them leave our city.” Acting DHS Secretary Chad Wolf was in Portland yesterday to meet with the troops, during which time he also met with the head of Portland’s police union but not the mayor or other elected officials.

Now, if this strikes you as a tad unconstitutional, I agree. I direct your attention to a long article at Lawfare by Steve Vladeck, What the Heck Are Federal Law Enforcement Officers Doing in Portland?

By all appearances, there are now at least 100 federal law enforcement officers on the ground in Portland. But media reports suggest that many of those officers (a) are not wearing identifiable uniforms or other insignia, (b) are not driving marked law enforcement vehicles, and (c) are not identifying themselves either publicly or even to those whom they have detained and arrested.

Vladeck goes on to say that these officers, dressed in military-type camoflage, appear to be Customs and Border Protection officers. Can they lawfully operate in Portland without permission from city and state authorities? It’s worth reading this article all the way through; here I’m just going to call out the major points.

* Since Oregon is on the Pacific Ocean — although Portland is about 360 miles inland — it can be argued that Oregon is a “border.”

* Also, too, it’s not clear what federal laws are being enforced.

* The federal officers have been seen patrolling the streets of Portland in unmarked vehicles, which appears to be a violation of all of the above. They’ve also arrested people just walking down streets (see video above) that don’t appear to be federal property.

* There are a great many unanswered questions about what the feds are doing in Portland, and the federal government is not volunteering answers. Further, it’s going to be just about impossible to compel the feds to cough up those answers anytime soon.

Here’s another perspective, from the New York Times:

After President Trump signed an executive order directing federal agencies to send personnel to protect monuments, statues and federal property during continuing protests against racism and police brutality, the Department of Homeland Security formed “rapid deployment teams.” Those are made up of officers from Customs and Border Protection, the Transportation Security Administration, the Coast Guard and Immigration and Customs Enforcement who back up the Federal Protective Service, which is already responsible for protecting federal property.

Videos showing federal agents using tear gas on protesters and complaints that federal agents lacking insignia are pulling people from the streets have raised questions over the legal authority that homeland security officials have to crack down on citizens. In Portland, federal agents have acted against the expressed opposition of the local authorities.

But officials in Washington said they had clear authority. Customs and Border Protection, which sent tactical border agents to Portland, cited 40 U.S. Code 1315, which under the Homeland Security Act of 2002 gives the department’s secretary the power to deputize other federal agents to assist the Federal Protective Service in protecting federal property, such as the courthouse in Portland.

We’re seeing that all the police powers awarded to the feds after the 9/11 attacks are now being used against U.S. citizens excercising constitutional rights, as many predicted would happen at the time.

Those agents can carry firearms, arrest those accused of committing a crime without a warrant and conduct investigations “on and off the property in question.”

“An interpretation of that authority so broadly seems to undermine all the other careful checks and balances on D.H.S.’s power because the officers’ power is effectively limitless and all encompassing,” said Garrett Graff, a historian who studies the Department of Homeland Security’s history and development.

This goes on to say that detaining protesters not on federal property is a gray area. In times past, the feds would only have gone in at the request of state and local government to assist local law enforcement. Here, state and local authorities are demanding the feds withdraw.

But the lack of any consent from local officials just means federal agents cannot rely on state and local laws to justify the arrests. Federal agents can still detain the demonstrators away from federal property if they can assert probable cause that a federal crime was violated, according to Peter Vincent, a former top lawyer with Immigration and Customs Enforcement, which has also sent agents to cities across the United States.

“Homeland security’s authorities are so extraordinarily broad that they can find federal laws that they are authorized to enforce across the spectrum, so long as it has some national security, public safety, human trafficking, criminal street gang conspiracy,” Mr. Vincent said.

Again, we’re seeing that powers given the feds to protect us from al Qaeda are now being turned on Americans exercising their First Amendment rights so that Donald Trump can brag about law and order. Or worse.

Why in the hell is this not a bigger story? A major American city is being softly Pinochet’ed in broad daylight. And, if we know one thing, if this president* and his administration* get away with this, it will only get worse. You’d have to be out of your mind—or comatose since the Fall of 2016—not to suspect that this could be a dry run for the kind of general urban mobilization at which the president* has been hinting since this summer’s protests began.

The violence in the Portland protests has consisted mostly of graffiti on federal buildings. “Two more dirty words on the side of a building, and Wolf might be calling in air strikes,” Pierce says.

Portland may be a dumbshow for dummies, but it also looks like a dress rehearsal. This is not an “authoritarian impulse.” This is authoritarian government—straight, no chaser. And this administration has a powerful thirst for it. It will do anything if it thinks it can get away with it in order to benefit a president* who wants to bring the Republic down on his head.

Trump’s twitter feed in recent days has consisted mostly of accusing Joe Biden of wanting to defund the police, which is a bogus charge. I take it he’s determined to make clamping down on the BLM demonstrations the centerpiece of his re-election campaign. So this is going to get worse. 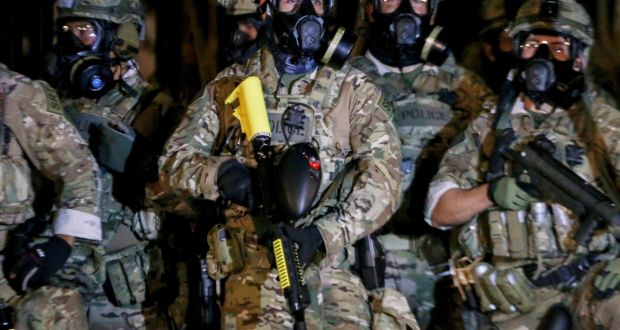 12 thoughts on “Pinochet’ed in Portland”