Yesterday Trump was said to have signed four executive orders that allegedly would take care of our economic issues. But he didn’t.

First off, of the four documents he signed, only one was an executive order. The other three were “memoranda,” which is something a president can use to give directives to executive branch agencies.

One of the memoranda was to the Treasury Department. It instructs Treasury to halt collection of payroll taxes from September 1 through December 31 for workers who earn under $104,000 a year. However, this is a deferment, not a cut; the taxes will still have to be paid. And payroll taxes add up damn fast. If I were getting a paycheck I would not want this.

But Trump has an answer for this. If he is re-elected, he says he will see to it that those payroll tax cuts are permanent. So if he gets another term, those deferred taxes won’t have to be repaid. But if Joe Biden is elected, too bad. And the punch line is that payroll taxes are the taxes that fund Social Security and Medicare. In effect, Trump is promising to defund Social Security and Medicare.

“If I’m victorious on November 3rd, I plan to forgive these taxes and make permanent cuts to the payroll tax,” Trump said at a news conference in Bedminster, N.J. “I’m going to make them all permanent.”

Presidents don’t have the constitutional authority to change tax laws, of course. Even if Trump is reelected, the Democrats are near certain to keep the House.

“It’s a payroll tax suspension,” Wallace explained. “Isn’t there a danger that a lot of businesses won’t pass these saving through to workers because they’re going to hold on to the money because at some point, according to this executive action by the end of the year, those payroll taxes are going to be have to be paid anyway?”

“Well, the president wanted to do a payroll tax cut,” Mnuchin replied. “We could do the payroll tax deferral. He’s going to go to the American people and tell them that when he’s reelected, he will push through legislation to forgive that so, in essence, it will turn into a payroll tax cut.”

Wallace also wondered if executive action would cause a reduction in Social Security and Medicare benefits.

“That’s not the case,” Mnuchin said without evidence. “There would be an automatic contribution from the general fund to those trusts funds. The president in no way wants to harm those trust funds.”

“We’re already running huge deficits,” Wallace observed. “So how are you going to pay for it from the general fund?”

“You just have a transfer from the general fund,” Mnuchin insisted. “We’ll deal with the budget deficit when we get the economy back to where it was before.”

You might notice that Mnuchin isn’t saying exactly the same thing Trump said. Trump was talking about a permanent payroll tax cut; Mnuchin is talking only about forgiving the deferment. Still, it sounds a little like blackmail. Vote for Trump or you’ll owe the feds a ton of money.

Either way, this order is almost certain to face a court challenge. Critics also question what good it will do, since only people who are currently working will get the benefit. Exactly what is the point, then? Well, other than to help Trump get reelected.

Some experts writing for Business Insider say that many employers probably would withhold the “extra” money from employees, since they’re going to owe it anyway.

Seth Hanlon, a tax expert at the left-leaning Center for American Progress, told Business Insider it’s unlikely that employers would turn that cash over to workers, because of a fear of footing the bill when it’s due.

What else did Trump do? Well, another memorandum extends the supplemental unemployment benefit, but at $400 a week instead of $600. But not exactly.

Trump’s memo calls for federal aid to restart at a level of $400 a week. But there’s a catch: The federal government is only paying for $300 of that. States have to kick in the other $100. Many states are currently cash-strapped as they fight the coronavirus, and there’s concern governors won’t sign on to do this.

Of course they won’t. The states are broke. A bit chunk of what the Democrats hoped to achieve was money for states and cities, so that cops and teachers and other state and municipal workers won’t have to be laid off. Republicans say no.

And you know that it won’t work because Larry Kudlow says it will.

Larry Kudlow has no idea how any of this works. https://t.co/vZAw4yfpNg

There are also a lot of legal questions about the money Trump is attempting to use to pay for this. He calls for $44 billion of funding from the Department of Homeland Security’s Disaster Relief Fund that is normally used for hurricanes, tornadoes and massive fires to be shifted over to unemployment.

“The basic notion here is the president is rejecting Congress’s power of the purse,” said David Super, a constitutional law expert at Georgetown Law. “That is something nobody who cares about separation of powers can let slide, even if they like what the money is being spent on.”

It’s probably not going to happen. But Trump may want Democrats to fight him on this, so that he can claim the Democrats wanted to take the money away. 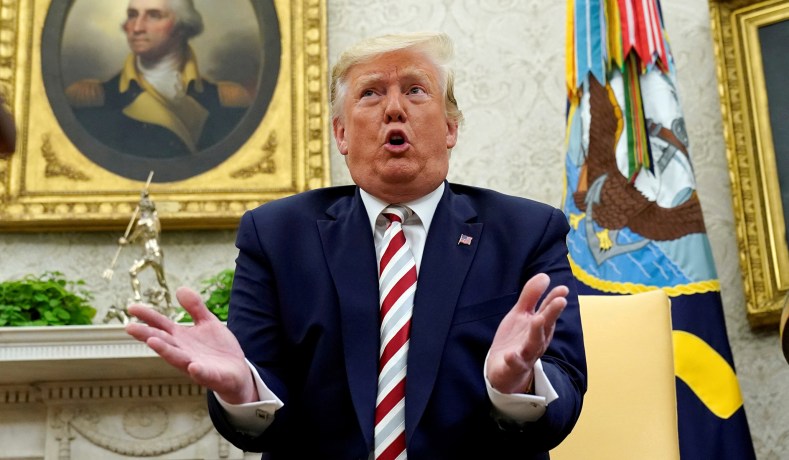 A third memorandum defers student loan payments until the end of the year. Interest on the loans is cancelled, but the principal is just deferred.

Finally, there was an actual executive order regarding the eviction ban that recently ended. HHS Secretary Alex Azar and CDC Director Robert Redfield are directed to “consider” whether an eviction ban is needed. No money is provided for this. One suspects Mnuchin, if not both of them, will say no.

Well, so much for that. To recap, all Trump has done is maybe defer some taxes and student loan payments that will still be owed, and the payroll tax deferment would only give some temporary extra money to people who are still getting paychecks and who, in theory, don’t really need it. The unemployed may see an extra $300 in addition to their state unemployment benefits, which is half what they were getting. It’s unlikely there will be a halt of evictions. And that’s it. No help for small business, states and cities, etc.

In other Trump news, this happened: