The punch line is that there is no Republican platform this year. The Republicans didn’t bother with one.

Less than 24 hours before its national convention begins, the Republican National Committee has released a “Resolution Regarding the Republican Party Platform” explaining its decision not to draft a new party platform this year. It’s a remarkable document and well worth reading in full—which isn’t a very big lift, since the whole thing is less than half the length of the table of contents of the 2020 Democratic Party Platform. The gist is that the Republicans won’t be able to have a full meeting of the convention’s platform committee thanks to COVID-19, but there’s no need for an updated platform spelling out Republican positions this year, since the party intends to “enthusiastically support the President’s America-first agenda.”

Somehow, the Democrats managed to come up with a platform, and the Democrats are doing a better job with the social distancing thing also.

On its face, the RNC’s resolution supporting whatever the president wants to do looks like a full-throated embrace of the Führerprinzip—and that’s certainly how it’s been received—but there’s a little more to it than that: It also excoriates the media for having “outrageously misrepresented the implications of the RNC not adopting a new platform.” So as not to outrageously misrepresent any implications, here’s what happened. On June 10, the RNC’s executive committee voted to adopt the 2016 Republican platform unchanged, a decision that lasted two days before their presidential candidate blundered into the conversation:

Trump tweeted that he thought there ought to be a new platform, although a short one. He said nothing about what might be in the platform until the committee adopted its “whatever Trump wants” resolution.

Then the Trump campaign released a bullet list of second-term goals. Most of these are so general as to be meaningless –” Return to Normal in 2021″; “Teach American Exceptionalism”; “Put Patients and Doctors Back in Charge of our Healthcare System.” I don’t think patients and doctors have ever been in charge of our healthcare system, at least since it’s been a “system.” But never mind. It’s a list of bromides with no clues as to how any of these goals might be accomplished. Devil, details, etc.

And for the record, here is the 2020 Democratic Party platform, all 92 pages of it.

One suspects the real reason why the Republicans have no platform is not that it was too challening to hold committee meetings. It’s because it’s too difficult to commit to anything more complicted than a carry-out pizza order with Trump in charge. Given his mercurial, um, thought processes, it’s impossible for the GOP to commit to any path or plan to do anything.

Do see Tim Alberta, at Politico, The Grand Old Meltdown. Alberta interviewed some long-time Republican operatives about the sudden lack of anything to put into a platform. What do Republicans want in a government? What do they believe? And the operatives had no answers. Even Frank Luntz was reduced to despair.

When I pressed, Luntz sounded as exasperated as the student whose question I was relaying. “Look, I’m the one guy who’s going to give you a straight answer. I don’t give a shit—I had a stroke in January, so there’s nothing anyone can do to me to make my life suck,” he said. “I’ve tried to give you an answer and I can’t do it. You can ask it any different way. But I don’t know the answer. For the first time in my life, I don’t know the answer.”

“Owning the libs and pissing off the media,” shrugs Brendan Buck, a longtime senior congressional aide and imperturbable party veteran if ever there was one. “That’s what we believe in now. There’s really not much more to it.”

It can now safely be said, as his first term in the White House draws toward closure, that Donald Trump’s party is the very definition of a cult of personality. It stands for no special ideal. It possesses no organizing principle. It represents no detailed vision for governing. Filling the vacuum is a lazy, identity-based populism that draws from that lowest common denominator Sanford alluded to. If it agitates the base, if it lights up a Fox News chyron, if it serves to alienate sturdy real Americans from delicate coastal elites, then it’s got a place in the Grand Old Party.

I have some quibbles with some of Alberto’s characterizations of both Republicans and Democrats, past and present, but this is still an interesting read.

Charles Pierce has some colorful things to say about the Republicans, the GOP un-platform excuse statement, and Trump’s bullet-point list, or “Great Stuff I Plan to Lie About Next Year.” A bit:

(Freed from the obligation of producing a platform, the delegates in Charlotte busied themselves passing resolutions on a number of pressing national talk-radio concerns. It passed a resolution condemning the Southern Poverty Law Center for “putting conservative groups or voices at risk of attack.” It passed another one supporting the continued celebration of Columbus Day, and a third inveighed, “Freedom of speech is trampled on daily with the notions of ‘political correctness,’ the plan to eliminate so-called ‘hate speech,’ and the promotion of a ‘cancel culture,’ which has grown into erasing of history.” I’m surprised they didn’t include a commercial for auto-glass replacement or male enhancement potions, followed by a resolution announcing Traffic On The Threes.)

This is an altogether remarkable political document, at least in my experience. Platforms are generally written to be ignored, but this is different. This is a loyalty oath to a government of witchcraft, a pledge of allegiance to the flag of unreason. And what will open on our various screens on Monday night will tax the ability of the media and all the rest of us to cling to reality as though our kayak has capsized in rock-strewn rapids. It will be a severe test of our ability to recognize what is right in front of our eyes. It well may be one of the last chances we have.

Speaking of Republicans tender concerns for freedom of speech and disdain for “cancel culture,” whatever that is, note that the very Republican state of Tennessee just passed a bill that limits a right to protest.

Protesters in Tennessee who break certain laws during demonstrations will now face harsher penalties, including losing the right to vote.

Camping on state property such as the Capitol was previously a misdemeanor. It will now be classified as a Class E felony punishable by one to six years in prison. Convicted felons also lose the right to vote and carry a gun.

The law also criminalized marking with chalk on a government building and introduced mandatory minimum jail sentences for certain crimes.

So in Tennessee, if you engage in free speech you must do it in a neat and non-obtrusive way, or no vote for you! 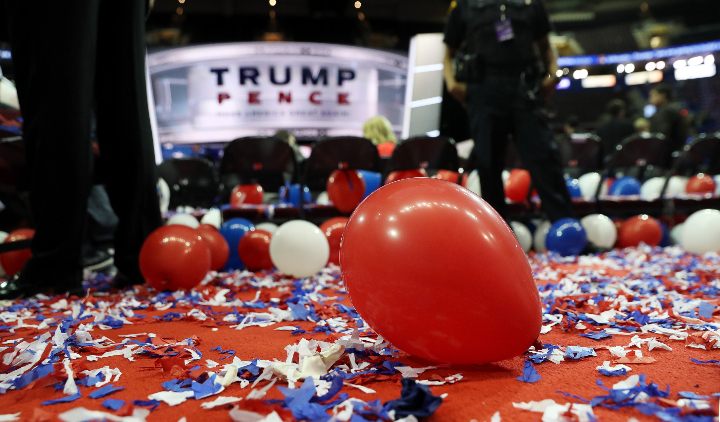 CLEVELAND, OH – JULY 21: on the fourth day of the Republican National Convention on July 21, 2016 at the Quicken Loans Arena in Cleveland, Ohio. Republican presidential candidate Donald Trump received the number of votes needed to secure the party’s nomination. An estimated 50,000 people are expected in Cleveland, including hundreds of protesters and members of the media. The four-day Republican National Convention kicked off on July 18. (Photo by John Moore/Getty Images)

7 thoughts on “Did You Hear the One About the Republican Platform?”