On a day in which massive wildfires are burning in 10 western states and the covid-19 death toll has reached 196,970, observing September 11 seems weird. Especially with the big lump sitting through the ceremony like this: 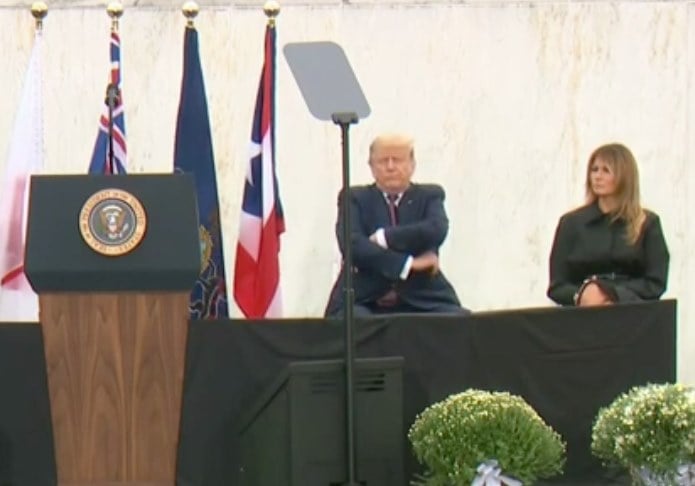 Seriously, Donald, you could have stayed home and played with your toy trucks, or whatever you do. I doubt anyone wanted you there, especially with you acting like a petulant three- year- old.

“There” was the Flight 93 memorial in Shanksville, Pennsylvania. Last week New York Gov. Andrew Cuomo suggested that Trump stay out of town …

“He can’t have enough bodyguards to walk through New York City,” Cuomo said on Wednesday night. “Forget bodyguards, he better have an army if he thinks he’s going to walk down the streets in New York. … He is persona non grata in New York City, and I think he knows that, and he’ll never come back to New York, because New Yorkers will never forget how gratuitously mean he has been.”

Also, this was reported yesterday in the New York Daily News:

The Trump administration has secretly siphoned nearly $4 million away from a program that tracks and treats FDNY firefighters and medics suffering from 9/11 related illnesses, the Daily News has learned.

The payments were authorized and made by the National Institute for Occupational Safety and Health, which oversees the program. But instead of sending the funds to the city, the Treasury started keeping some of the money.

“This was just disappearing,” the program’s director, Dr. David Prezant, told The News. “This is the most amazing thing. This was disappearing — without any notification.”

So, yeah, not a good day for Trump to be in New York City. See also Trump, Biden marking 9/11 with very different tones.

The 20th anniversary is next year. I sincerely hope that ever after there are no more big, whoop-dee-doo observances that involve the President or a surrogate showing up. Scale it down and make it for the locals, for the survivors and eyewitnesses. Everybody else can stay away.

5 thoughts on “Sit Up and Uncross Your Arms, Donald”