Yesterday the New York Times dropped another Trump tax return bomb: Trump has a previously undisclosed bank account in China.  If you don’t want to read the whole thing, here’s an abridged version at Forbes.  It begins:

A report from the New York Times reveals a decade of Donald Trump’s unsuccessful business activities in China, including an undisclosed bank account that paid nearly $200,000 in taxes, undermining his own exaggerated claims of Hunter Biden’s business dealings there, as well as his rhetoric that his Democratic opponent, Joe Biden, is soft on the country.

The Forbes story leaves out one of the most suspicious parts. Jonathan Chait:

The Forbes article quotes a lawyer from the Trump organization saying that no deals were made or business activity conducted in China; the bank account and five subsidiary companies Trump created in China were meant to pursue business deals, but this pursuit went nowhere. So where did the $17.5 million come from? And where did it go?

This bit of hinkiness comes out at a particularly bad time for Trump. The final scheduled presidential debate is tomorrow night, and the Trump campaign has been whining up a storm because the announced list of topics does not include foreign policy (it does include “national security,” which is inextricably linked to foreign policy, IMO, although Trump may not understand that). The Trump team really, really wants to discuss foreign policy. Possibly they think this is a way they can bring up Hunter Biden and avoid job losses and pandemic response. Today they may be rethinking that, however. Jonathan Chait:

President Trump has spent months insisting Joe Biden is in hoc to China. “China is on a massive disinformation campaign because they are desperate to have Sleepy Joe Biden win the presidential race,” Trump tweeted last spring. “Beijing Biden is so weak on China that the intelligence community recently assessed that the Chinese Communist Party favors Biden,” claimed his son, falsely, this summer. More recently, he has seized upon hacked emails purporting to show financial links between Biden and China.

See also Alex Ward at Vox, Trump’s team is pushing for a debate on foreign policy. That could backfire.

The Hunter Biden Chronicles may have taken another blow in Sacha Baron Cohen’s Borat Subsequent Moviefilm, in which Rudy Giuliani got sucked into making a fool of himself.

In the film, released on Friday, the former New York mayor and current personal attorney to Donald Trump is seen reaching into his trousers and apparently touching his genitals while reclining on a bed in the presence of the actor playing Borat’s daughter, who is posing as a TV journalist. … They are then interrupted by Borat who runs in and says: “She’s 15. She’s too old for you.”

I may have to watch that moviefilm some time.

Other than attempting to flog the Hunter Biden story that so far has gone nowhere, Trump’s closing argument for his reelection seems to be that he doesn’t need any of this shit. Cristina Cabrera, Talking Points Memo:

President Donald Trump got remarkably candid on Tuesday night with his supporters in Pennsylvania, a state he desperately needs to win on Election Day, by telling them that if he had a choice, he wouldn’t have bothered to grace them with his presence.

“Four or five months ago when we started this whole thing….before the plague came in, I had it made,” Trump said during a rally in Erie, Pennsylvania. “I wasn’t coming to Erie. I mean I have to be honest, there’s no way I was coming. I didn’t have to.”

Unfortunately, the President complained to his supporters, the pesky COVID-19 pandemic that’s caused his approval ratings to plummet forced him to actually reach out to them.

“And then we got hit with the plague, and I had to go back to work,” Trump said. “Hello, Erie. Can I please have your vote?”

Strangely enough, the comment met with cheers and applause from the crowd.

One suspects Trump could announce he gets his kicks by locking Barron in a closet with hungry rats, and his culties would cheer and applaud.

His other clever strategy has been to pick fights with women journalists, which is bound to win more votes from women (/sarcasm). He isn’t even waiting until the debate is over to badmouth moderator Kristen Welker, for example.  Caleb Ecarma, Vanity Fair:

With the final presidential debate just a few days out, Donald Trump and his allies have launched a preemptive strike against its moderator, NBC News White House correspondent Kristen Welker, in an attempt to portray the Thursday contest as rigged from the start. “She’s a radical Democrat,” Trump told supporters on Monday in Arizona, adding that the journalist has been “screaming questions at me for a long time.” The onstage attack follows him tweeting Saturday how Welker has “always been terrible & unfair, just like most of the Fake News reporters, but I’ll still play the game.”

Ecarma says this is a strategy of intimidating the moderator in advance. I doubt Welker is intimidated. Trump’s campaign team members have said nice things about Welker in the past, Ecarma continues, but in the past few days they’ve gone overboard portraying Welker and the debate commission as accomplices of the Democrats. I take it they are resigned to Trump screwing up.

And then there’s the Lesly Stahl debacle. Trump stormed out of an interview being filmed for 60 Minutes because, apparently, Stahl had the nerve to ask him questions. And now he’s saying he’s gong to release the tape of the interview made by his team before it airs on 60 Minutes to show how awful Lesley Stahl is.

I am pleased to inform you that, for the sake of accuracy in reporting, I am considering posting my interview with Lesley Stahl of 60 Minutes, PRIOR TO AIRTIME! This will be done so that everybody can get a glimpse of what a FAKE and BIASED interview is all about…

Somehow I suspect 60 Minutes is thinking about airing an uncut version of the interview also.

According to a person with knowledge of what happened during the interview, Trump was unhappy that Stahl asked him tough questions regarding his rhetoric about Michigan Gov. Gretchen Whitmer (D) and his handling of the coronavirus pandemic, as well as the size of the crowds at his rallies and his disputes with Anthony S. Fauci, the nation’s leading infectious-disease expert. Stahl also told him during the interview that allegations about Biden’s son Hunter were not verified and that the Obama administration did not spy on the Trump campaign. Many of the questions were about the coronavirus pandemic and his handling of it, said the person, who spoke on the condition of anonymity to discuss the interview frankly.

Trump’s problem is that he’s being called to account for shit he actually did and stuff he actually said. This doesn’t work for him. Greg Sargent writes that Trump only wants to campaign in an alternative fictional universe.

Right now, Trump is loudly calling on Attorney General William P. Barr to launch some sort of investigation into the new Hunter Biden pseudo-revelations about emails supposedly discovered on his laptop. This whole scandal is based on largely unverified accusations and false premises.

Oddly, it’s almost as if Trump has assumed all along that he can’t win a reality-based argument and a fair election against Biden. Instead, he set about using the government to manufacture fictions that would define the parameters within which this campaign would unfold.

Trump is angrily demanding that top officials in his government announce actions that make this “scandal” seem real. Stahl pointed out that the story is unverified, which is 100 percent correct, but this isn’t what was supposed to happen.

There are a number of things that Trump wants to pretend are verified that haven’t been. President Obama spied on him. Joe Biden used his office to enrich his son Hunter. U.S. cities are being burned to the ground by leftist terroists (while right-wing terrorism isn’t a problem). The coronavirus is vanquished. A vaccine will be avialable tomorrow. Trump wants to campaign in a universive in which all of those things are verifiable true.

But none are true. And Trump doesn’t know how to navigate in a world in which none of those things are true. He’s floundering around in a range against reality itself.

And, of course, any election result other than Trump Wins is a hoax. And he’s going to pull every trick in the book to prove it. 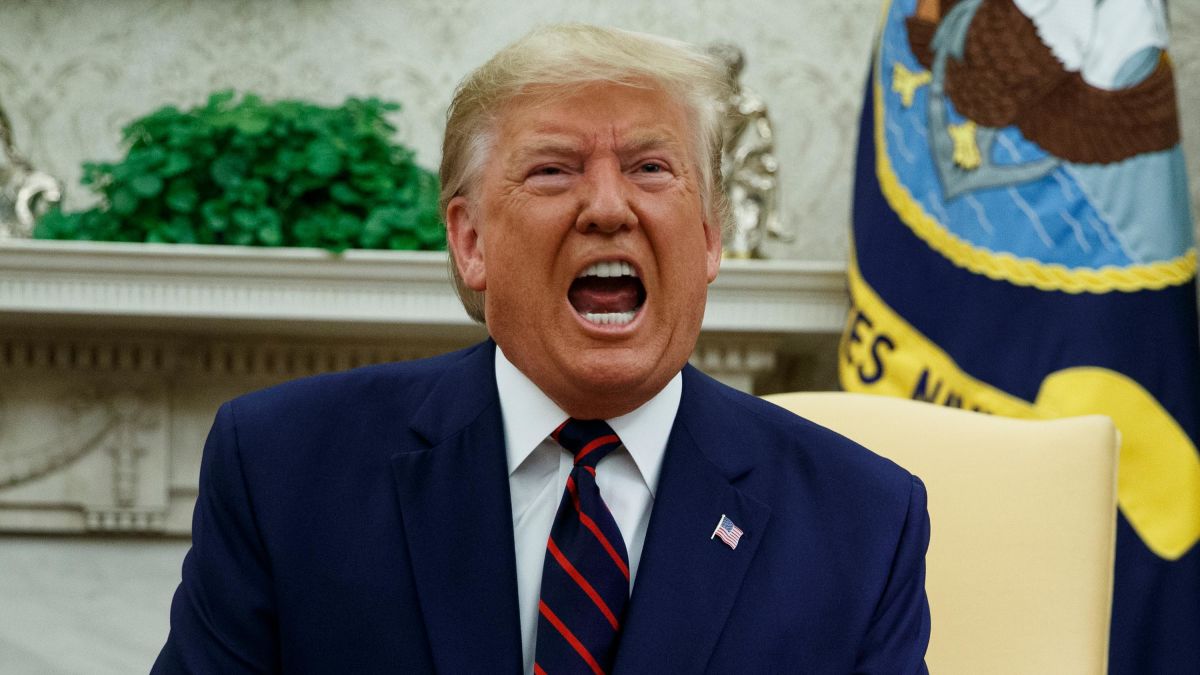