I’m about halfway through the New York Times’s deep dive report, 77 Days: Trump’s Campaign to Subvert the Election. Sorry if it’s behind a firewall for you. If you can’t get to the New York Times even in an incognito window, a good alternative read is the “Off the Rails” series at Axios. They just published a bonus episode, Inside the craziest meeting of the Trump presidency. Hysterical.

But back to 77 Days. One piece of information I did not know involves the Supreme Court suit against the Georgia, Michigan, Pennsylvania and Wisconsin elections filed by Texas Attorney General Ken Paxton. According to the NY Times, the suit itself was written by some lawyers aligned with the White House. Kris Kobach, of voter suppression fame, was involved.

Then the suit was “shopped” to Republican state secretaries of state, because only a secretary of state can file a suit in the Supreme Court against a state, apparently.  Paxton was not the Trumpers’s first choice, but he was the one willing to take it on. Note also that Bill Barr refused to have anything to do with it.

The Trumpers also networked through the Republican Attorneys General Association to get other AGs to sign on or file amicus briefs. There was huge pressure applied to state attorneys general offices to get on board. Many refused. Even some of the ones who did join the suit were extremely skeptical of the whole thing.

“The decision whether we join this amicus is more political than it is legal,” James E. Nicolai, North Dakota’s deputy solicitor general, wrote to his boss.

“I still think it is most likely that the Court will deny this in one sentence,” Mr. Nicolai wrote in a follow-up email, which was also sent to the attorney general, Wayne Stenehjem.

Which, of course, is exactly what happened.

Other tidbits: The permit for the January 6 rally was for the elipse only, not a march. The event originally was organized and promoted by a group called Women for America First, but a couple of days before the event the White House took it over and turned it into a White House production. Many in the original lineup of speakers were rescheduled to speak at a smaller rally the day before.

The NY Times also tells us that Mitch McConnell was led to believe Trump was just blustering about the election being stolen. He didn’t want to mess with Trump before the January 5 runoff in Georgia. But he was also being given assurances that Trump wouldn’t really burn down the house, so to speak.

Mr. McConnell had had multiple conversations with the White House chief of staff, Mark Meadows, and the senator’s top political adviser, Josh Holmes, had spoken with Mr. Kushner, the president’s son-in-law and senior adviser. Both West Wing officials had conveyed the same message: They would pursue all potential avenues but recognized that they might come up short. Mr. Trump would eventually bow to reality and accept defeat

I bet Kushner and Meadows knew good and well they were lying.

On to the impeachment trial. Briefs have been filed by both sides.  I have only skimmed them, but note that the Dem brief is 77 pages long, and Trump’s is only 14. Trump’s new lawyers are mostly arguing that the impeachment is unconstitutional, that Trump didn’t incite violence, that he had a right to say whatever he said. They don’t appear to be arguing that the election was actually stolen. (Update: On closer reading, yeah, they did, in a kind of passive-aggressive way.) Axios is reporting that Trump’s first legal team walked because Trump blew up at their $3 million estimate for their services, even though he’d raised $170 million for his defense fund.

Former president Donald Trump’s impeachment trial is set to begin in a week’s time. And judging by a couple of interviews Monday, his side is focused on delivering a not-so-veiled threat: You might want to be careful about calling witnesses.

But the threat, as enunciated, is rather strange and illogical.

Trump’s new lawyer David Schoen and Sen. Lindsey O. Graham (R-S.C.) both issued such warnings Monday night on Fox News. They suggested that holding a lengthy trial including witnesses could open up “Pandora’s box,” in Graham’s words, because Trump’s team could then call its own.

I’d say Pandora’s Box is already wide open, Senator, and your buddy Trump opened it. What we’re doing now is cleaning up the mess.

Graham wants to call witnesses who would testify that a lot of people who attacked the Capitol had decided to do so before they came to Washington. Therefore, they couldn’t have been incited by Trump’s speech at the rally. However, the Democrats’s brief accuses Trump of inciting people over many weeks with baseless claims of a stolen election. It’s not limited to what he said on January 6. Graham’s witnesses might actually help make the Dems’s case. 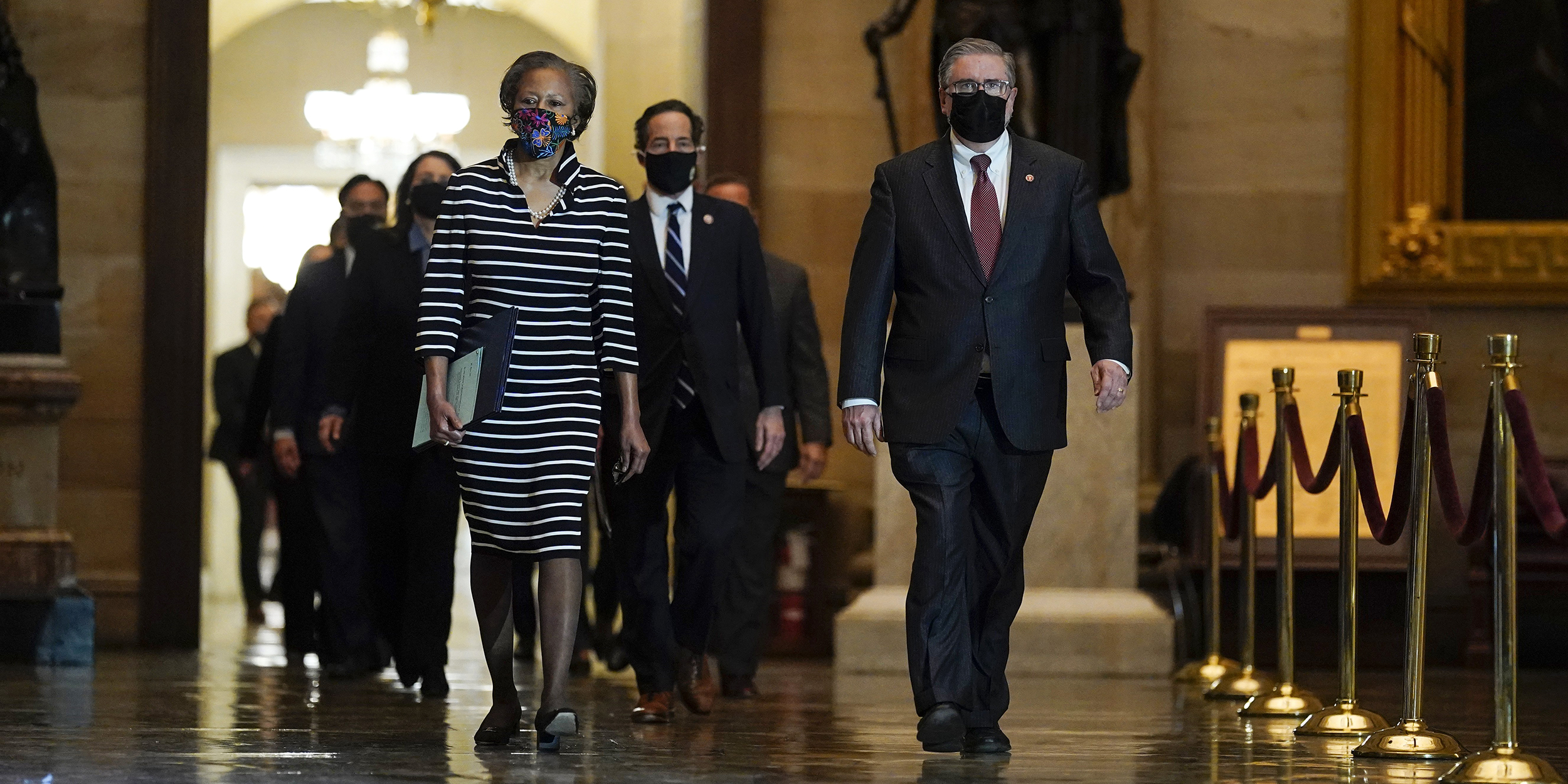 Clerk of the House Cheryl Johnson along with House Sergeant-at-Arms Tim Blodgett lead the Democratic House impeachment managers as they walk through Statuary Hall on Capitol Hill to deliver to the Senate the article of impeachment alleging incitement of insurrection against former President Donald Trump, in Washington, Monday, Jan. 25, 2021. (AP Photo/J. Scott Applewhite, Pool)

10 thoughts on “Old News: The Insurrection”