Last summer in Portland, by several accounts, a self-identified antifa activist named Michael Forest Reinoehl shot and killed Aaron “Jay” Danielson, a member of a far-right group called Patriot Prayer. After the shooting Reinoehl made a video in which he claimed he acted in self-defense. Videos of the incident don’t clearly show what happened, only that Reinoehl walked away and Danielson didn’t.

In any event, Reinoehl was never tried because he was killed by a task force made up mostly of local law enforcement officers and assembled by the U.S. Marshalls. This crew appears to have decided it was too much trouble to bring Reinoehl in. I wrote at the time,

We’ve learned a bit more about last week’s shooting in Portland, although probably we’ll never know exactly what happened since the suspect was killed in a “hail of gunfire” by police. Convenient, that. Court documents say that both the victim, Aaron “Jay” Danielson, and the alleged and now dead perpetrator, Michael Forest Reinoehl, were armed with handguns. Before he was killed, Reinoehl made a video claiming he shot Danielson in self-defense.  Unfortunately no video has come to light of the actual shooting, just the immediate aftermath, so there is no way to know if Reinoehl was telling the truth about being in danger.

The manner of Reinoehl’s execution by the task force is a matter of, shall we say, confusion. No two news stories of the event tell exactly the same story. Some accounts say Reinhold fired at the marshalls before they opened fire on him; some say he didn’t. But here is one of the accounts from the New York Times —

On Sept. 3, about 120 miles north of Portland, Mr. Reinoehl was getting into his Volkswagen station wagon when a pair of unmarked sport utility vehicles roared through the quiet streets, screeching to a halt just in front of his bumper. Members of a U.S. Marshals task force jumped out and unleashed a hail of bullets that shattered windows, whizzed past bystanders and left Mr. Reinoehl dead in the street. …

… But a reconstruction of what happened that night, based on the accounts of people who witnessed the confrontation and the preliminary findings of investigators, produces a much different picture — one that raises questions about whether law enforcement officers made any serious attempt to arrest Mr. Reinoehl before killing him.

In interviews with 22 people who were near the scene, all but one said they did not hear officers identify themselves or give any commands before opening fire. In their official statements, not yet made public, the officers offered differing accounts of whether they saw Mr. Reinoehl with a weapon. One told investigators he thought he saw Mr. Reinoehl raise a gun inside the vehicle before the firing began, but two others said they did not.

Mr. Reinoehl did have a .380-caliber handgun on him when he was killed, according to the county sheriff’s team that is running a criminal homicide investigation into Mr. Reinoehl’s death. But the weapon was found in his pocket.

An AR-style rifle was found apparently untouched in a bag in his car.

Five eyewitnesses said in interviews that the gunfire began the instant the vehicles arrived. None of them saw Mr. Reinoehl holding a weapon. A single shell casing of the same caliber as the handgun he was carrying was found inside his car.

Garrett Louis, who watched the shooting begin while trying to get his 8-year-old son out of the line of fire, said the officers arrived with such speed and violence that he initially assumed they were drug dealers gunning down a foe — until he saw their law enforcement vests.

“I respect cops to the utmost, but things were definitely in no way, shape or form done properly,” Mr. Louis said.

In fact, according to Nate Dinguss, Reinoehl was clutching a cellphone and eating a gummy worm as he walked to his car outside an apartment complex in Lacey, Wash. That’s when officers opened fire without first announcing themselves or trying to arrest him, Dinguss, a 39-year-old who lives in the apartment complex, said in a statement shared with The Washington Post.

As I said, you can find other reports, including some other stories in the New York Times and Washington Post, that say Reinoehl opened fire on the marshalls first, and the marshalls returned fire. No videos of this have turned up, I don’t think. The task force members did not wear body cams, nor were there cameras on their vehicles.

But now the New York Times has published an update:

Last week, local investigators concluded a monthslong homicide inquiry with the announcement that the activist, Michael Reinoehl, had most likely fired at authorities first, effectively justifying the shooting.

But a review of investigation documents obtained by The New York Times suggests that investigators for the Thurston County Sheriff’s Office discounted key pieces of contradicting evidence that indicate Mr. Reinoehl may never have fired or pointed a gun.

While investigators found a spent bullet casing in the back seat of Mr. Reinoehl’s car, and pointed to that as evidence he probably fired his weapon, the handgun they recovered from Mr. Reinoehl had a full magazine, according to multiple photos compiled by Thurston County authorities showing Mr. Reinoehl’s handgun. The gun was found in his pocket. …

In announcing its conclusions, the sheriff’s office wrote that “witness statements indicate there was an exchange of gunfire, which was initiated by Reinoehl from inside his vehicle.” A spokesman, Lt. Cameron Simper, said that while investigators could not conclude for certain that Mr. Reinoehl had fired his weapon, he said it was “highly likely.”

But one of the witnesses that Thurston County investigators relied on to reach their conclusion that Mr. Reinoehl had fired his gun was an 8-year-old boy. His father, Garrett Louis, who had rushed to his son’s side at the time of the shooting, has consistently said he believed that officers opened fire first without shouting any warnings.

Of the two other witnesses who investigators cited to support the conclusion that Mr. Reinoehl fired his gun, one did not see it happen and the other was not sure.

Do read the whole article. The cops are covering their butts.

Also keep in mind that after Danielson was killed, Donald Trump and much of rightie media seized on the incident as evidence that antifa is a violent and lawless “organization.” It may have been important to a lot of important people that Reinoehl not be given a chance to defend himself.

Attorney General William P. Barr trumpeted the operation as a “significant accomplishment” that removed a “violent agitator.” The officers had opened fire, he said, when Mr. Reinoehl “attempted to escape arrest” and “produced a firearm” during the encounter.

If he’d been tried, Reinoehl might have been found guilty of Danielson’s murder, and maybe he was guilty. But his death looks like a political execution to me.

In other law enforcement news — Do read about Lt. Caron Nazario, U.S. Army Medical Corps, and his encounter with police. Lt. Nazario, dressed in uniform, was driving through Windsor, Virginia, in a newly purchased Chevrolet Tahoe when police lights started flashing behind him. It was night, and the lieutenant is black. Rather than stop on a dark road he flipped on his turn signal and drove slowly to a gas station about a mile away before he stopped. He placed his cell phone on the dash and put his empty hands out of the window.

The cops got out of their car, drew their guns on Lt. Nazario, shouted threats at him, and then doused him with pepper spray.

The chemical temporarily blinded Nazario and caused a burning sensation in his lungs, throat and skin. Nazario’s dog was in a crate in the back and also started to choke.

Nazario got out of the vehicle and again asked for a supervisor. Gutierrez responded with “knee-strikes” to his legs, knocking him to the ground, the lawsuit says. The two officers struck him multiple times, then handcuffed and interrogated him, the complaint says.

Medics had to be called to attend to Lt. Nazario’s injuries. The cops also refused to explain to him why he’d been pulled over. The police report said it because his car lacked a permanent plate, but body cam videos show the dealer’s temporary plate properly displayed in the rear window.

Lt. Nazario has filed filed a lawsuit in federal court that accuses the officers of illegally searching his car, using excessive force and violating his rights under the First Amendment. The lawsuit seeks $1 million in compensatory damages. 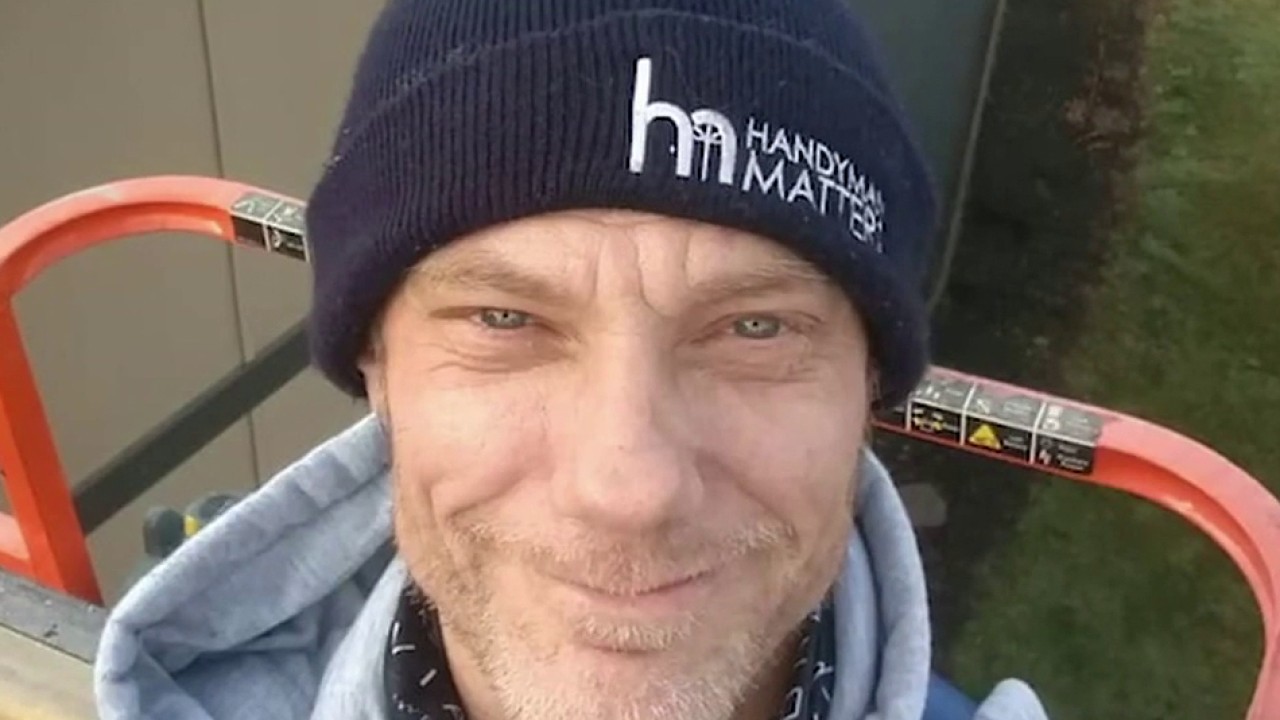