North America’s biggest petroleum pipeline is in a race against time to overcome a cyberattack that’s frozen fuel shipments before regional reserves of gasoline, diesel and jet fuel run dry.

Colonial Pipeline said segments of its Texas-to-New Jersey line are being brought back online in steps, and substantially all service should be restored by the weekend. The pledge eased some of the most immediate concerns about fuel shortages in major population centers up and down the U.S. East Coast. The question now is whether regional inventories held in storage tanks are enough to satisfy demand while Colonial works on resuming operations.

Several news stories report that the hack was the responsibility of a ransomware gang called “DarkSide.” And several news stories say that DarkSide was really just after some quick cash. I take it they aren’t being paid. Full service probably won’t be restored until the end of the week, though. In the meantime, gas stations in several states could start running out of gas by mid-week.

And the first moral is, this is what 21st century crime looks like.

In an interview with Reuters, a senior official with the U.S. Department of Homeland Security’s cyber arm, CISA, said that the dramatic hack should serve as a wakeup call well beyond the energy industry.

“All organizations should really sit up and take notice and make urgent investments to make sure that they’re protecting their networks against these threats,” said Eric Goldstein, CISA’s executive assistant director for cybersecurity.

“This time it was a large pipeline company, tomorrow it could be a different company and a different sector. These actors don’t discriminate.”

The second moral is, Mitch McConnell is an ass.

Senate Minority Leader Mitch McConnell (R-Ky.) signaled in a new interview that he is open to an infrastructure spending bill totaling as much as $800 billion.

“The proper price tag for what most of us think of as infrastructure is about six to 800 billion dollars,” McConnell told public television in Kentucky over the weekend.

“What we’ve got here can best be described as a bait and switch,” he added.

As I wrote in the last post, Republicans are alarmed that low-income restaurant workers aren’t lining up to go back to their old jobs. They refuse to consider that if workers can’t get gas to put in their cars, or transportation generally, or day care for their kids, or someone to watch Grandma, or running water that isn’t toxic, or a lot of other things not classified as “roads” or “bridges,” that gets in the way of being available for work.

In other infrastructure news, President Biden is meeting with Sen. Joe Manchin this afternoon. Without Manchin Dems may have to compromise with Mitch. 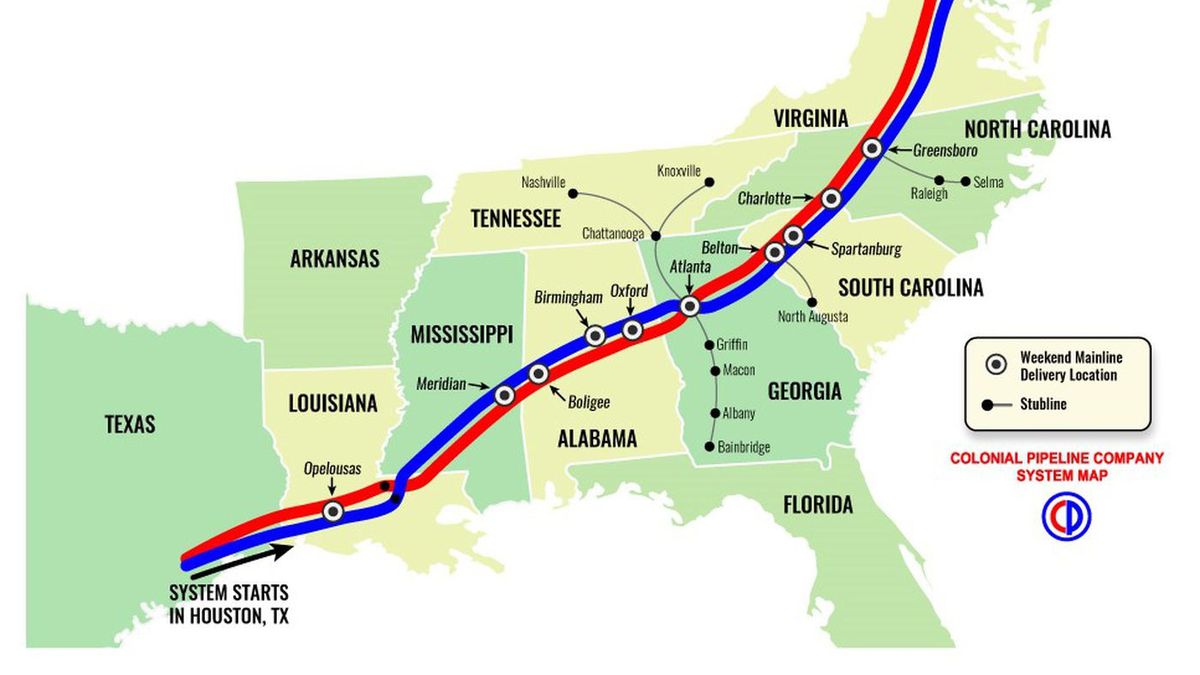 Map showing a portion of the Colonial pipeline, which terminates in New Jersey.

6 thoughts on “Crime and Infrastructure”