More than two months ago, Texas Governor Greg Abbott ended all state pandemic restrictions — mask mandates, capacity limitations, the lot.  Many predicted disaster would follow. But it hasn’t been that bad. There are new cases and new deaths. As of May 20, there were 75,260 active covid cases reported in Texas, and 44 people died of covid in Texas that same day. But those numbers are far lower than the stats for January. As far as covid data is concerned, Texas is about where it was on the first of June, 2020.

Note, however, that in July 2020, the Texas Tribune reported that Texas hospitals are running out of drugs, beds, ventilators and even staff. 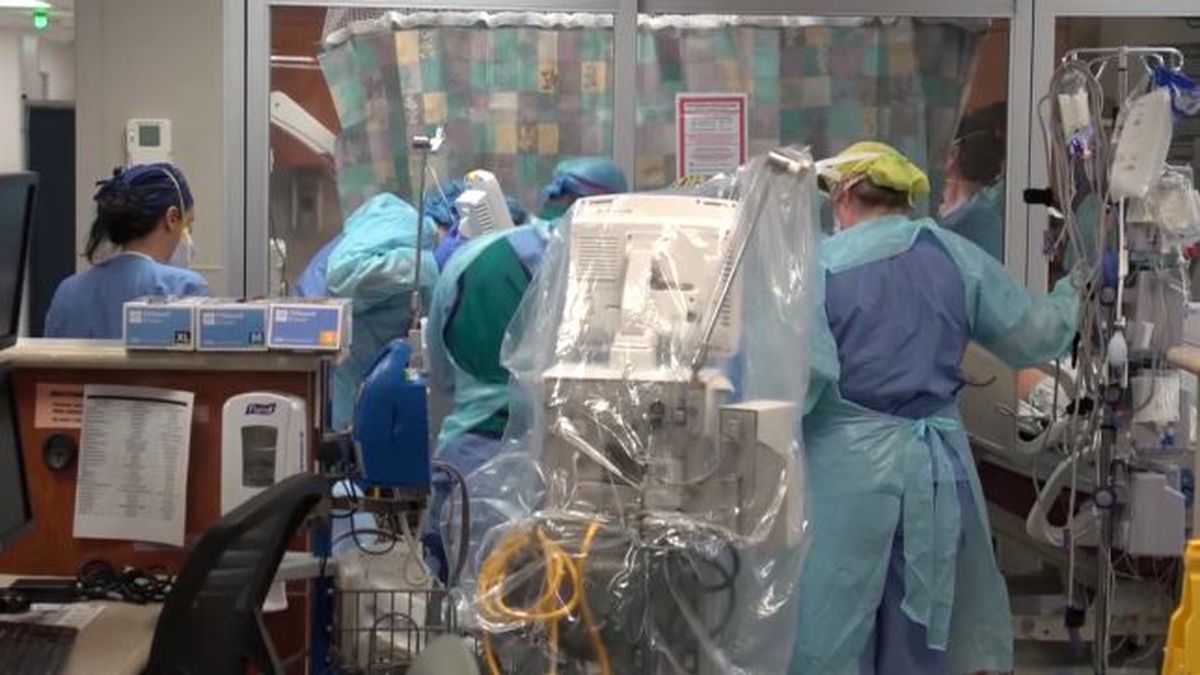 Scene from a Texas hospital.

Does that mean that the restrictions and mandates didn’t matter? Not necessarily. At the Atlantic, Derek Thompson has another explanation.

Abbott’s decision didn’t matter because nobody changed their behavior. According to the aforementioned Texas paper, Abbot’s decision had no effect on employment, movement throughout the state, or foot traffic to retailers. It had no effect in either liberal or conservative counties, nor in urban or exurban areas. The pro-maskers kept their masks on their faces. The anti-maskers kept their masks in the garbage. And many essential workers, who never felt like they had a choice to begin with, continued their pre-announcement habits.The governor might as well have shouted into a void.

Across the country, in fact, people’s pandemic behavior appears to be disconnected from local policy, which complicates any effort to know which COVID-19 policies actually work.

In other words, responsible people followed the covid restrictions whether they were mandated or not, and the right-wingers didn’t. Plus now people are getting vaccinated. So maybe Texas won’t have a replay of last summer.

Another interesting bit of data shows that the economic impact of the pandemic was about the same whether there were lockdowns or not.

In November, for instance, a team of economists using private data to survey all 50 states concluded that state-ordered shutdowns and reopenings had only “small impacts on spending and employment.” … Last spring, Illinois towns issued stay-at-home orders, while Iowa towns a few miles away did not. The decline in economic activity was just about the same on both sides of the border.

This is what a lot of economists predicted as the pandemic was beginning. The economy is going to get slammed whether businesses are allowed to open or not, many said. The key to getting the economy back on track is getting the virus under control, they said.

Remember Sweden? All last year the wingnuts babbled about Sweden. Sweden didn’t close any businesses! Why can’t we be like Sweden?

Well, it turns out that Sweden’s experiment in natural herd immunity didn’t work, and the nation officially abandoned that policy last winter and ordered lockdowns. Sweden suffered much higher death rates than other nations in northern Europe. Whether the sacrifice helped Sweden economically depends on whom you ask about it.  Lars Calmfors wrote in the Washington Post in October 2020:

What has been the economic effect? Like other countries, Sweden has been hit hard economically. During the first six months of 2020, the gross domestic product fell by 8.5 percent. Unemployment is projected to rise to almost 10 percent in the beginning of next year.

Just because the government didn’t mandate many restrictions didn’t mean a lot of Swedes weren’t voluntarily being cautious. Businesses, schools, and day-care centers remained open, but homes for the elderly were closed to visitors (eventually) and public gatherings of more than 50 people were banned (eventually). As in the U.S., telecommuting became the norm when possible. Many travel plans were put on hold. Yet here is the result: 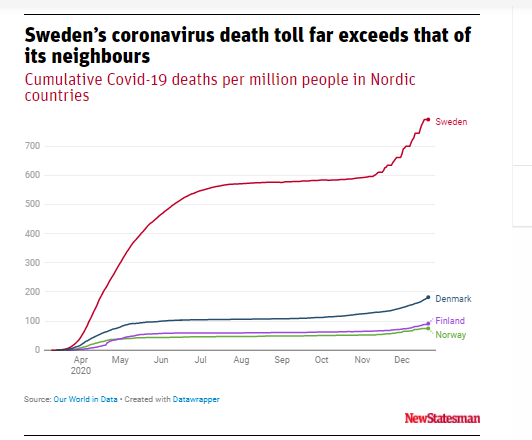 The Swedes are not happy with their government, I take it. See The Inside Story of How Sweden Botched Its Coronavirus Response by Kelly Bjorklund at Foreign Policy.

It may be awhile before we see analysis of rates of infection and deaths in various states and cities and how events and policies might have made a difference here or there, and I’m not going to attempt such a thing now. Just note that this happened this week:

Republican Rep. Marjorie Taylor Greene, during an interview on a conservative podcast this week, compared House Speaker Nancy Pelosi’s decision to continue to require members of the House to wear masks on the chamber floor to steps the Nazis took to control the Jewish population during the Holocaust

Greene, in a conversation with the Christian Broadcast Network’s David Brody on his podcast “The Water Cooler,” attacked Pelosi and accused her of being a hypocrite for asking GOP members to prove they have all been vaccinated before allowing members to be in the House chamber without a mask.

“You know, we can look back at a time in history where people were told to wear a gold star, and they were definitely treated like second class citizens, so much so that they were put in trains and taken to gas chambers in Nazi Germany,” Greene said. “And this is exactly the type of abuse that Nancy Pelosi is talking about.”

Maybe she won’t be re-elected next year. We can hope.

7 thoughts on “The Price Many Paid for Politics”