So here in the Fool Me state, covid cases have reached a six-month high. Four days ago, Gov. Do-Nothing Parson announced a vaccine lottery that will award $10,000 prizes to vaccinated residents.  Yeah, I signed up already. Other than that, I cannot tell that anything is being done at the state level to mitigate the surge. Considering that Missouri has recently been called the “epicenter” of the Delta surge, that lack of response is kind of horrifying. It’s too soon to tell if the lottery will make any difference, although I understand the rate of statewide vaccination has finally reached 40 percent.

This guy speaks for many.

Thesis: This was the week that vaccinated America started to get really fed up. pic.twitter.com/4VZfkuvVMF

I’m reading that there is a difference between the vaccine hesitant and the vaccine resistant. Many of the hesitant have heard lots of scare stories about the vaccines. Some have had covid and thought they were immune enough. For some, getting the vaccine was inconvenient or required time off work or making transportation arrangements. This group can often be persuaded to get the vaccine once their concerns are addressed.

The resisters are another matter. They are opposed to getting the vaccine for ideological reasons. That’s harder to address. Clearly, this group thinks that not getting vaccinated makes them “smart” or “own the libs.”

Josh Marshall has a thoughtful post up today that doesn’t seem to be behind a subscription firewall. He points out that the enormous majority of the demographic groups who vote are vaccinated now.

Shift our perspective in this way and you see that when you’re talking about the political nation, a big, verging on overwhelming majority are vaccinated. Among people over 65, the group that votes most consistently, 80% are vaccinated. Furthermore there is a lot of evidence that vaccination rates escalate with age. People in their forties are substantially more vaccinated than people in their twenties. So higher rates of vaccination align with propensity to vote.

The retirement living crowd may be conservative, but they grew up getting vaccinated. They remember polio and government vaccination programs. Even the most healthy of them are spending more and more time seeing doctors and getting scary medical procedures now.  A vaccine isn’t that much of a leap for them. And they are likely to have had friends who died of covid. Even in Missouri, about 74 percent of people 65 and over are fully vaccinated.

Most elected Republicans haven’t been explicitly anti-vaccination. Indeed, even before the last couple weeks many have made low volume statements saying they’ve been vaccinated and encouraging others to do so. But they’ve almost all participated in the effort to make vaccine resistance into a kind of freedom movement – banning government or private businesses from using vaccine passports, banning mask mandates, politicizing debates over school reopenings. As a party they’ve leaned into valorizing vaccine resistance and banning any private or governmental efforts to place the burden of the consequences of non-vaccination on those who choose not to be vaccinated.

They thought that would supercharge their already happy prospects for 2022 by riding an anti-vax or anti-vax mandate wave. And now they’re thinking they may have miscalculated.

I like that phrase “leaned into valorizing vaccine resistance.” That’s exactly it. The implicit message coming from Republican leaders in these parts is that if you’re really smart and thinking for yourself, you don’t get vaccinated. That’s what sheep and libtards do. If you do get sick, you’ll be fine, so what’s the deal?

But, yes, I think Republicans miscalculated big time on this one. That’s why some of them, recently, have changed their tunes a bit. But the really stupid ones are not likely to figure this out.

Charlotte Klein writes at Vanity Fair that the Republican reckoning on covid vaccines has finally arrived.

“Even conservative leaders now are having a hard time figuring out how to rein in what had primarily been a propaganda campaign, and they are now realizing their constituencies are particularly vulnerable,” Eric Ward, a senior fellow at the Southern Poverty Law Center, told the AP. Ron DeSantis, the governor of Florida whose 2022 reelection campaign merch includes beer koozies that say “Don’t Fauci My Florida,” recently noted that nearly all COVID-19 hospitalizations are among unvaccinated people and affirmed that “these vaccines are saving lives.” There’s been an overall shift in some corners of Fox News—a network that has for months amplified misinformation and politicized the shots.

By now, though, it may be too little, too late. “Once you are opposed, it is very hard to change that position. And that’s what’s happening right now,” Republican pollster Frank Luntz told the AP.

My guess is that even if Trump himself came out and asked his culties to be vaccinated, most of them wouldn’t do it. Not that I expect Trump to do any such thing. See also Jonathan Allen:

Elijah Haahr, a former Missouri House speaker, said there’s an asymmetry to the voting public. For those who have chosen not to get vaccinated, he said, “that will be their No. 1 issue, and they will vote against the party that wants to force them to vaccinate.”

That’s probably true, which is why I expect a lot of the Republicans will continue to treat any government pandemic mitigation as government overreach and a Communist plot. But these same people are assuming that pro-vaccine voters will have moved on to other issues, so that anti-vaxx politicians won’t pay a price. But that seems to be less and less true.

But Kennedy said Democrats will still be fired up, because skepticism about vaccines is part of what her party’s voters see as a pattern of harmful disinformation and misinformation coming from GOP officials and their allies in conservative media.

“Our people are tying it to all of these other things,” Kennedy said. “As happy as people are that we got Trump out of office, the threat is so real and still in people’s face.”

For all voters, the urgency may have everything to do with where the fight against Covid-19 stands in the fall of 2022.

“It depends on the progress of the pandemic between now and the midterm,” said Michael Steel, a GOP strategist.

I bet Republicans are really, really hoping the pandemic just disappears. Like Trump promised it would. 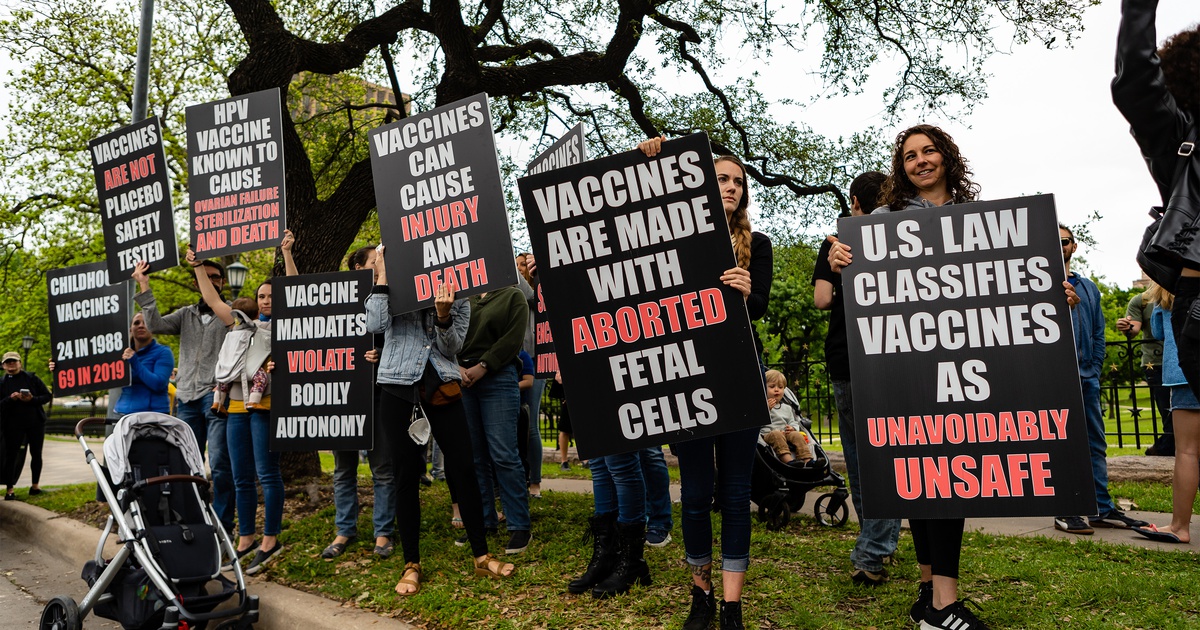 8 thoughts on “How Republicans Miscalculated on Vaccines”