I have been listening to the January 6 hearings, which have concluded for the day. The law enforcement officers giving testimony today have been impressive, and I am thankful they were spared being ridiculed and abused by Jim Jordan. And it’s such a relief for hearings to be informative and dignified and not overrun with yammering idiots. This will all be especially juicy when Trump officials testify.

I think Kevin McCarthy is definitely the big loser today. The hearings went on without his hand-picked members, including the ones Pelosi didn’t bounce. He is trying to stir up a controversy about Nancy Pelosi’s alleged “power grab,” The Right is even trying to blame Pelosi for the Capitol’s security failures. But as the hearings continue, and attention is focused on Trump’s role in the insurrection, the Malignancy of Mar-a-Lago is likely to be displeased no one on the committee is taking his side.

In other news, there have been warnings the bipartisan infrastructure talks are falling apart, after all. And we’d been told it was going so well. But the talks aren’t over yet. Exactly what the sticking points are I’m not sure, but I get the impression it’s mostly about the “pay fors.”

The Arizona-Cyber Ninjas “fraudit” also appears to be falling apart. Today we read that the person appointed to be a liaison between the Arizona Republicans who commissioned the audit and the auditors was locked out of the audit. That’s right; the Republican state government’s own representative, who was supposed to be there to keep tabs on the procedings, is not being allowed into the procedings. And now this guy, Ken Bennett, is saying that he’s not been allowed to see a lot of whatever is going on, even when he’s been there. The “auditors” were told by the Cyber Ninja to not share information with Bennett. Again, this is the Republicans’ guy on the scene.

Bennett is a former Arizona Secretary of State who was chosen to oversee the audit because of his experience with elections. And until this week he has been defending whatever is going on and blaming the media for spreading falsehoods about it. But something must have happened, and now Bennett is locked out and changing his tune.

Now, exactly one week later, Bennett is saying he is “very concerned” there will be inaccuracy in the count and that throughout the audit he has been very confused as to what procedures were being used to validate the numbers. On Monday, the Republic’s Jen Fifield reported that Bennett had been permanently banned from the audit site by Pullen—allegedly at the Arizona Senate’s behest—but that he would somehow be remaining on to manage the audit without having access to the building. (Bennett did not comment to Fifield.)

As Maricopa County’s Republican supervisors realized weeks ago, it’s long past time to shut down this sham, which Bennett is now forbidden from even attending. Perhaps he should take a hint?

My guess is that the Cyber Ninja is just trying to milk this gig for every penny he can get. I hope when this ever ends, Maricopa County will sue to be reimbursed for the $3 million it will cost to replace voting machines.

Here in “covid country,” aka the Fool Me State, Missouri Attorney General Eric Schmitt did indeed file a lawsuit against St. Louis city and county to stop their implementation of new indoor mask mandates. The new mask mandates call for everyone age five and older in St. Louis city and county to wear a mask in indoor public places and on public transportation regardless of vaccination status. And Schmitt steps in to be the voice of the coronavirus.

As mask mandates in St. Louis City and County went into place Monday, Missouri Attorney General Eric Schmitt was quick to file a lawsuit against the elected leaders and health directors of both municipalities, accusing them of ignoring federal guidelines.

“This is completely arbitrary and capricious,” Schmitt said. “By the way, that’s not even what the CDC recommends.”

Right on cue, the CDC announced it is changing its masking recommendations. The CDC now says everyone should wear a mask indoors in public places regardless of vaccination status, especially in hot spots.

The most recent data report an average of 295 cases new per day in St. Louis County, which is a 155 percent increase from the average two weeks ago.

From my favorite source of St. Louis snark, The Riverfront Times:

Schmitt’s Vanity Suit: It’s hard to know who to root for in Attorney General Eric Schmitt’s lawsuit against St. Louis and St. Louis County over a return to mask mandates. Should you side with the health departments hoping to usher people away from shore as a tidal wave approaches, or should you cheer the use of tax dollars spent to both boost Senate-hopeful Schmitt’s name recognition and, at the local level, defend against a frivolous litigation? Hmm. Maybe we should look at it from another angle: Is it better to support city and county officials tasked with cleaning up the failures of state and national Republicans who’ve undone the sacrifices made by responsible people for more than a year, or an AG who has made losing splashy lawsuits his primary job? Honestly, does it even matter? Taxpayers are paying the attorneys on both sides. But no one wants to be a fence-sitter, so maybe it’s best to err on the side of those making hard decisions for the masses and not Schmitt’s nakedly self-serving fight for Fox News air time.

Click on the link and scroll down for some excellent snark on our do-nothing governor. 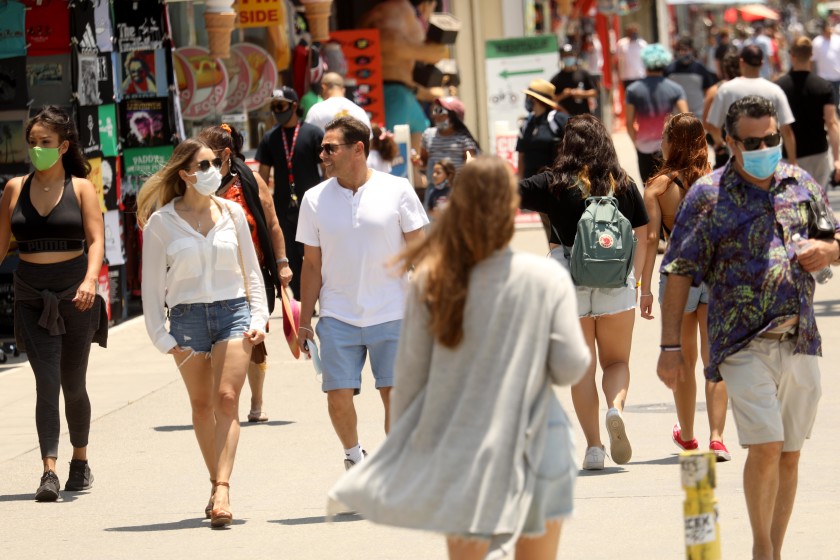