The Kansas City Star reports that Greitens skipped an important meet and greet Republican gathering in Kansas City so that he could hang around with the Cyber Ninjas at the Arizona Audit, but that Schmitt and McCloskey were there. This is the part of the article that really leaped off the page for me — “Attorney General Eric Schmitt’s Friday night hospitality suite featured an accordion player.”  An accordian player? What, are we stuck in an old episode of the Lawrence Welk Show? Seriously?

“As Greitens spurns a Republican establishment that has largely turned against him,” says the Star, “the other candidates are competing to become the dominant choice of party activists, some of whom fear the former governor, beset by scandal, could put GOP control of the seat in danger.”

Why Greitens would scare the chickens more than McCloskey or Schmitt is not clear to me. As far as issues are concerned, or as much as these specimens care about issues, I don’t see much daylight between them. Back to the KC Star:

In a state where Trump remains extremely popular among Republicans, the Senate candidates are looking for any possible way to tie themselves to the former president. They are playing up Trump-era accomplishments, demonizing Democrats and talking the language of cultural grievance deployed by the former president.

Greitens’s campaign site doesn’t have an issues page, which I do not find comforting.

According to news stories, both McCloskey and Grietens are still saying that Trump won the 2020 election. It’s not clear to me whether Schmitt is still on board with reinstating Trump, but as I wrote on the earler “from hell” post, Schmitt enthusiastically supported Texas AG Paxton’s stupid lawsuit challenging the presidential election results in Georgia, Wisconsin, Michigan, and Pennsylvania. Calls from Schmitt’s office encouraged other Republican state AGs to file amicus briefs in support of the suit, which SCOTUS flushed down the toilet in December.

McCloskey showed up in Kansas City with “Never Back Down” bumper stickers. He did back down recently, however. He and Patricia pleaded guilty to misdemeanors in the infamous protest incident from last summer. They’re paying $3,750 in fines and had their guns taken away. They have new guns now. Stupid plea deal. They should be doing time now for the felonies in the original indictment.

Did I mention that another of McCloskey’s issues is Law and Order? Check.

Oh, and McCloskey is hosting a barbeque and “RINO roast” in St. Louis June 27. 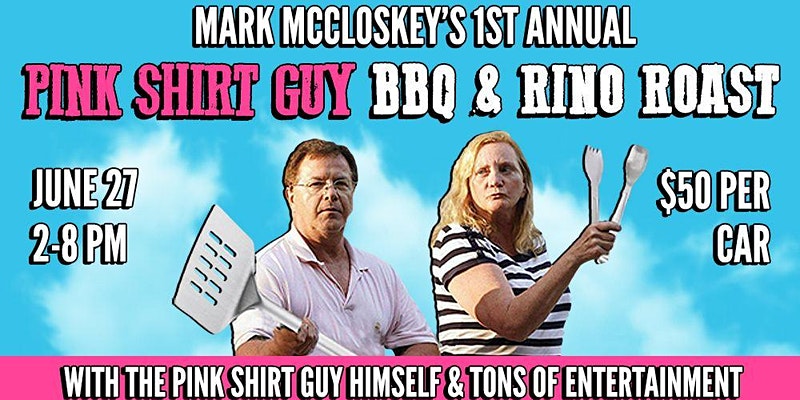 What the “entertainment” is, I do not know. Michael Flynn was supposed to be there  — maybe Flynn plays the harmonica — but he has canceled. Perhaps the McCloskeys can replace him with Eric Schmitt’s accordion player.

Back to Eric Greitens’s pilgrimage to Arizona. The Kansas City Star —

Greitens posted multiple videos of his trip to social media and gave numerous interviews to right-leaning media, falsely asserting that the review could lead to decertification of the election.

“I think we’re gonna find out what all of those results are and it’s very clear. If they don’t have the ballots, they don’t have the victory, and then you’re gonna see leaders in Arizona step up to decertify the election. It’s really simple,” Greitens told The Gateway Pundit.

There are other declared Republican Senate candidates; the only one of note is state representative Vicky Hartzler. Hartzler has a long history of campaiging against same-sex marriage and Planned Parenthood. There are Democratic candidates also, but no one I’ve ever heard of, and I’ll have to do some more research on them.

Blessedly, no one is running television ads. Yet.

8 thoughts on “The Missouri Senate Primary From Hell, Update”