I did not know before today that the My Pillow Guy, Mike Lindell, used to be a crack addict. Maybe everybody else knew that; I’ve never paid much attention to him. But here’s a CNBC story from 2017 that explains his rise from crackhead screwup to self-made millionaire.

Fast forward to today. Lindell may not be on crack any more — I assume he isn’t — but that doesn’t mean he isn’t self-destructing and throwing his self-made business away. A lot of retailers have stopped carrying his product. He’s had to suspend television advertising. He wasted least a million dollars this year trying to launch a new social media platform for conservatives called “Frank,” which by all acccounts is too glitchy to use.  He’s been named in a $1.6 billion lawsuit by Dominion Voting Systems.

Yet he pushes ahead to get the 2020 election overturned. Did I mention he also used to have a gambling addiction, according to Wikipedia? I wonder if he still does.

By all appearances, Lindell has given up reasonably honest business for running cons. Right now he is supposed to be hosting a “cyber symposium” for paying attendees in Minnesota. He promised to use this symposium to reveal proof that 2020 votes had been siphoned away from Donald Trump and given to Joe Biden. When the symposium was scheduled to start yesterday, Lindell instead threw a fit that Frank had been hacked (how can they tell?) and the symposium had to be postponed, but now it seems to be ongoing. This clip from yesterday provides a taste —

Mike Lindell is legit upset that some people want to break for lunch in this “cyber symposium,” yelling that he’s gonna stay up on stage for 3 days straight.

It was reported that Lindell walked off the stage a few minutes later. Maybe he got lunch.

And here’s the proof:

Really, that’s it. I’m serious. I got it from Philip Bump at WaPo, who explains,

Rob Graham, a technologist and author, went to the summit to evaluate what Lindell claims to have. During a “breakout session,” he and others were provided with access to what Lindell’s team claims to have obtained. Graham shared what they were given — a collection of files that consists of 1) a list of computer Internet protocol addresses and 2) gibberish like that above. Well, technically they were given rich-text format files, some of which were inexplicably converted to hexadecimal encoding. Graham, an expert on Internet data, described the provided material as “a bunch of confusing stuff they can’t explain,” and said that those running the symposium pledged to hand over the “real” information Tuesday night or Wednesday.

But what if you’re not trying to prove it? What if you’re trying to make some cash and you stumbled onto a big, juicy mark? What if there were a millionaire desperate to prove something, a millionaire who’s not exactly an Internet savant but one willing to hand over loads of cash for data you made up — as some of the data previously released by Lindell pretty obviously was? For a while, you’re skating, cashing checks and sending along reports on occasion. Eventually, though, you get closer and closer to the point at which you need to actually turn over your work.

Maybe Lindell is not the grifter, but the mark. Maybe he’s got a bad case of addictive personality disorder, and his current addiction is Trump’s Big Lie. And he can’t stop throwing his money on the table and rolling the dice one more time.

Bump then mentions work by Julian Sanchez of the Cato Institute — yeah, I know, it’s the Cato Institute — showing the strong overlap between those who believe the Trump conspiracy theories and those refusing to get a vaccine. I know that doesn’t surprise you. And I can’t find Sanchez’s work online. But I like what Bump wrote here —

In both cases, Sanchez wrote, the conspiracy theories “have the superficial trappings of real science. Links to journal articles on the one hand, or on the other, impressively hackery looking hex dumps & spreadsheets full of IP addresses” — a reference to Lindell’s information.

“[I]n both cases, this evidence is absolutely useless to the target audience,” he continued. “They have neither the training nor the context to evaluate the quality or relevance of technical articles in medical journals — or even to understand what the article is claiming in many cases. … They are, however, being flattered by the INVITATION to assess the evidence for themselves — do your own research, make up your own mind!”

Instead of offering their trust on experts in their fields to explain complicated subjects, the audience is convinced that it needs only to trust itself — though, of course, they’re actually simply trusting the hustlers presenting incomplete or misleading information. What the hustlers offer the audience, Sanchez says, “is the illusion of not trusting an authority — unlike all those sheep who trust the mainstream authorities.”

Ain’t it the truth? I love the folks who offer some wackjob opinion about vaccines and claim they learned it from their own research. I sometimes respond, Oh? You’re a microbiologist and you have your own lab? To which they reply with a link to some inflammatory verbiage on clickbait dot com that “proves” Bill Gates is using the pandemic to get us all microchipped.

Anyway, Mike Lindell seems to be on the road to squandering everything he built, and someday we’ll be reading in some sad “where is he now?” story that after Lindell lost everything one of his sons got him a job selling shoes. 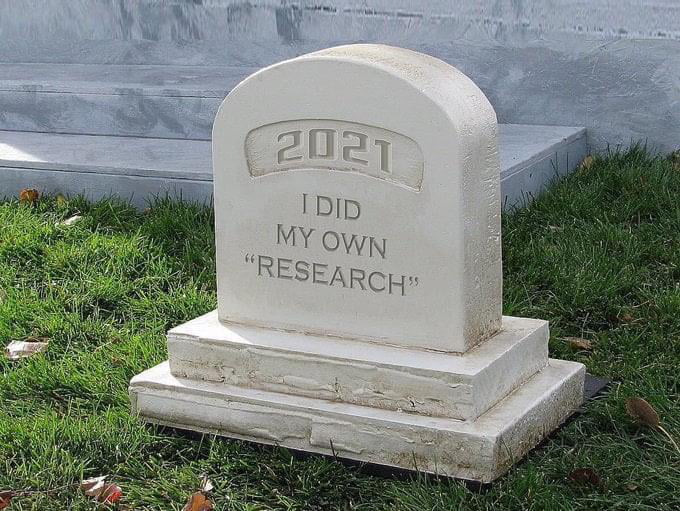 16 thoughts on “Down the Rabbit Hole with Mike Lindell”