I wrote about Kyle Rittenhouse a couple of days ago. See also:

Put together, all of these commentaries tell a story of how a perfect storm of political and cultural factors have come together to make it perfectly legal for some people to shoot and kill other people. Here are the major points:

One, many states now allow open carry of firearms by just about anybody.

Two, there has long been a pattern of “reforming” self-defense laws to favor “defenders” over the slain. Stand-your-ground laws are just one example. See also:

Additionally, some states (including Arizona, Arkansas, California, Florida, Kansas, Kentucky, Louisiana, Mississippi, North Carolina, North Dakota, Oklahoma, Pennsylvania, Rhode Island, South Carolina, Wisconsin, and Wyoming) have replaced the common law “reasonable person” standard, which placed the burden on the defendant to show that their defensive action were reasonable, with a “presumption of reasonableness,” or “presumption of fear,” which shifts the burden of proof to the prosecutor to prove a negative.

Of course, it appears white men somehow get away with a lot more “presumptions” than other people.

A lot of this favoring of self-defenders stems from the long-standing fantasy that law-abiding citizens routinely defend themselves from criminals with guns. Self-defense shootings happen all the time, it’s believed, but in fact genuine self-defense shootings are very rare. “Victims use guns in less than 1% of contact crimes,” the Harvard School of Public Health says, and there is absolutely no honest data showing that widespread gun-carrying either reduces crime or makes people safer from criminals. But proclaiming otherwise sells a lot of guns.

But if you’ve been listening closely, you might notice that the gun cultists don’t talk about crime as much as they used to. Ten and more years ago, people arguing for laxer gun laws talked about crime, crime, crime, and then maybe about “freedom” and telling jokes about shooting lefties. Now they’ve escalated to talking about “freedom” and “tyranny” and shooting the lefties more than about crime, and they aren’t joking. See Proud Boys call for ‘stacking up’ bodies ‘like cord wood’ after Rittenhouse verdict at RawStory.

As Adam Serwer wrote, “Right-wing gun culture is not unlike the wellness industry, in that it requires the cultivation of a sustained insecurity in its audience in order to facilitate the endless purchase of its products. You can never be too skinny, and you can never have too many guns to stop the impending communist takeover.” 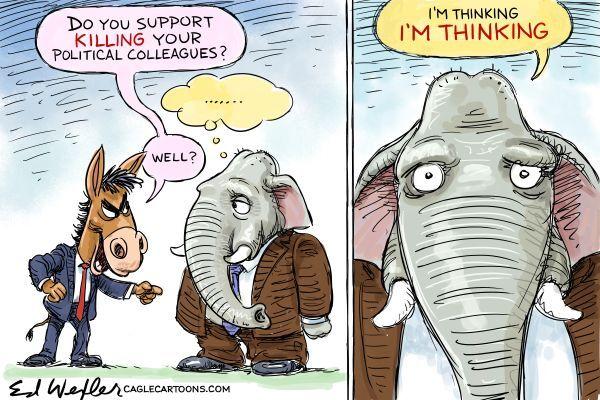