A recent headline at Buzzfeed News tells us that Murder Is A Leading Cause Of Death In Pregnancy In The US. It turns out this isn’t new. I found a WebMD article from bleeping 2001 that said the same thing:

Given all the risks associated with pregnancy, it’s easy to imagine that expectant mothers are vulnerable to illnesses and even to death. But shocking new information shows that these women actually are more likely to be murdered than to die from any complications of pregnancy — or from any other cause for that matter.

“We found that homicide was the leading cause of death among women who were pregnant … and accounted for 20% of deaths among that group, compared with 6% of deaths among nonpregnant women of reproductive age,” says author Isabelle Horon, DrPH, from the Maryland Department of Health and Mental Hygiene, who conducted a study that looked at pregnancy-associated deaths from 1993 to 1998.

Fast forward to the Buzzfeed article of four days ago:

A woman in Houston who showed an ultrasound to her boyfriend, a mother of five who was carrying a sixth child, and a pregnant woman coming home from a baby shower were all recent victims of homicide, a top cause of death for pregnant people in the US.

Pregnant people are more than twice as likely to be murdered during pregnancy and immediately after giving birth than to die from any other cause, according to a nationwide death certificate study. Homicide far exceeds obstetric causes of death during pregnancy, such as hemorrhage, hypertension, or infection.

Pregnant women “face a risk of being murdered 16% higher than women the same age who are not pregnant, the recently released Obstetrics & Gynecology journal study concludes.” The article goes on to say that most of these deaths result from domestic violence.

With that in mind, let us skip over to New York magazine, where Sarah Jones writes about Josh Hawley and the New Anti-Feminism.

The conservative movement believes men are in trouble, and they know who to blame. “The left want to define traditional masculinity as toxic. They want to define the traditional masculine virtues — things like courage and independence and assertiveness — as a danger to society,” the Republican senator Josh Hawley said during a recent speech. Thus besieged, men are retreating into pornography and video games, abandoning their traditional responsibilities, he added. …

… Hawley’s anti-feminism isn’t novel, but he is responding to a new moment in modern American politics. Conservatives have always argued that by muddying gender roles, feminism harms men and women alike. Yet in recent years, this rhetoric has acquired an even sharper edge, pitting men and women against each other as if greater freedom for women comes directly at the expense of men. For Republican politicians and their supporters, Trump’s unapologetic misogyny further expanded the borders of the possible.

Trump has a long history of associating with men accused of abusing women. More recently, he has endorsed candidates like Sean Parnell and Herschel Walker, also accused. See also Domestic violence, sexual abuse: A number of Senate GOP candidates have to answer for ugly allegations by Amber Phillips in the Washington Post.

That an ugly backstory is no longer immediately disqualifying in Republican politics is arguably a sign of how much Trump has reshaped the GOP in his likeness. Trump won the presidency in 2016 despite being accused by more than a dozen women of sexual harassment and weeks after it was revealed he bragged about grabbing women’s genitalia.

“Politics has changed,” said one Republican operative, speaking on the condition of anonymity to be candid. “What’s seen as acceptable has changed.”

Seriously, righties, what’s with all the tribes of violent, threatening, politically extreme men these days? Some of these groups appear to be explicitly male — Oath Keepers, Proud Bois. WTF?

Virtuous but underappreciated men? Or thugs? You decide.

Women do take part in some of their activities, but in an auxiliary role. It’s traditional. But then there are also more openly misogynist tribes, such as the Gamers and Incels and men’s rights activists. These are tribes of men who blame women for why their lives suck.

During the Trump years a number of social psychology studies documented that men who support Trump tend to suffer from “fragile masculinity” or “precarious manhood.” See, for example, “Precarious Manhood” and Voting for Trump from Psychology Today, November 2020.

Precarious manhood refers to the fragile nature of traditional masculinity.

Traditional masculinity, as a form of social status, is “hard-won and easily lost.” A real man cannot simply be: He must repeatedly prove his masculinity.

In the U.S., Knowles and DiMuccio note, masculinity is associated by many with behaviors like “avoiding the appearance of femininity and homosexuality, seeking status and achievement, evincing independence and confidence, taking risks, and being aggressive.”

And threats to (or doubts about) masculinity often motivate hypermasculine behaviors, such as risk-taking and aggression.

The Psychology Today article also notes that these same men score high on the right-wing authoritarian scale. See also How Donald Trump appeals to men secretly insecure about their manhood. 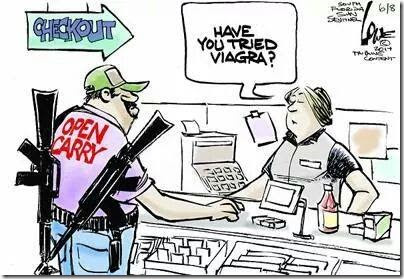 Several decades ago, Joseph Campbell warned that American men were not being properly taught to be men. He was writing about the Greatest Generation, mind you. Boys didn’t get enough time with their fathers and older men as they were growing up, he said. They were getting their ideas about masculinity from movies, not real life.

I’ve read that this problem is something that’s been growing since the industrial revolution and the rise of capitalism. Before the 19th century, the theory goes, most men were either farmers or independent artisans of some sort, and boys grew up working alongside their fathers on the farm or tanning hides or shoeing horses or whatever. Changing economic models took men out of their homes and made them employees who were gone most of the time. Succeeding generations of fathers became less and less involved in the lives of their children, and this has been especially hard on boys.

Since then, things haven’t gotten better. I’m not seeing Josh Hawley’s Three Masculine Virtues — courage, independence, and assertiveness — in the guys who abuse women, join private militias, need an assault weapon to go out for a sandwich, and throw temper tantrums when asked to wear a mask or get a vaccine. I see bluster, tribalism, and aggression, not to mention authoritarianism. Most of all, I see immaturity. Too many men seem stuck permanently at the emotional age of fourteen and permanent adolescent rebellion mode. They’ve got Mommy issues, and Daddy issues, and they blame everybody but themselves for whatever they don’t like.

Daddy issues, you say? They want Trump to be their daddy, because in their eyes he’s a real man. 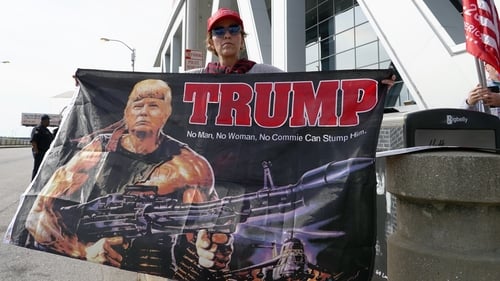 There’s something so sadly pathetic about putting Trump’s head on Rambo’s body. Trump must be the least masculine man to ever sit in the Oval Office. He’s a spoiled, pampered punk who never held a job or faced a real physical challenge in his life. But some men are so desperate for a daddy they’ve turned him into one, projecting all their twisted notions about manliness onto his flabby frame.

And Scrawny Josh Hawley is a private prep school brat who never met a principle he wouldn’t betray to further his ambitions. Masculine virtues, Senator? What would you possibly know about masculine virtues? Or any other kind of virtues, for that matter?

I started this post with something I’d just learned about homicides of pregnant women. Women don’t exactly rule the world yet. The pandemic has hurt women economically a lot more than men. There’s still a pay gap. Even before the pandemic women, but not men, found a lack of affordable child care a barrier to employment, and it’s worse now. We’re still underrepresented in government and business. But Hawley’s “virtuous men” resent us anyway. That’s just pathetic.

8 thoughts on “Josh Hawley’s “Virtuous Men” Should Grow Up”