I’ve been reading a lot of snarking about West Virginia voters, and why Joe Manchin has to be a right-wing hardass because that’s what his constituents want. From a social media contact: “HE knows his voter. They believe as he does, everybody but me is undeserving free loaders. They are not insulted by his words. They all know he is talking about everybody else. Not me! Only I am deserving.”

Another perspective, from a tweet that Bette Midler caught flack for tweeting: “What #JoeManchin, who represents a population smaller than Brooklyn, has done to the rest of America, who wants to move forward, not backward, like his state, is horrible. He sold us out. He wants us all to be just like his state, West Virginia. Poor, illiterate and strung out.” If she’d stopped after “He sold us out” she would have been all right, but instead she’s being roasted as an “elitist.”

I do not live in West Virginia, but demograpically it’s pretty similar to the Ozarks, I suspect. The reasons rural white people vote as they do are complicated. As I have said many times, one big reason is that they are saturated with right-wing media and rarely if ever hear progressive perspectives. At this point, they’ve been so well taught that “government is the problem” that many have given up looking to the government — local, state, and federal — for solutions to their very real problems. It’s also the case that neither party really listens to them. It’s also the case that the people who represent very poor rural areas often are not the rural poor.

There is an excellent article in the New Yorker by Evan Osnos, “West Virginians Ask Joe Manchin: Which Side Are You On?” If you want to read it and run into a subscription firewall, just open it in a private/incognito window. Osnos writes that to some West Virginians, “Manchin has become an icon of Washington oligarchy and estrangement, a politician with a personal fortune, whose blockade against programs that have helped his constituents escape poverty represents a sneering disregard for the gap between their actual struggles and his televised bromides.”

This part sounded familiar to me:

To anyone who knows the details, Manchin’s self-narrative—of a coal-country football star from the tiny town of Farmington—has always passed over his wealth and status. The Manchins are machers; Joe’s grandfather ran Farmington’s grocery store and served, over the years, as its fire chief, constable, justice of the peace, and mayor. His father had a similar stature in local politics, while also expanding the family business from groceries into furniture and carpets. Joe’s uncle, A. James Manchin, ascended to the positions of West Virginia’s secretary of state and treasurer. Joe’s daughter, Heather Bresch, went to work at a pharmaceutical plant in the state run by Mylan, eventually becoming its C.E.O. and collecting an estimated $37.6-million exit package when she retired, in 2020. Joe, for his part, has prospered as a coal broker, building a net worth of between four and thirteen million dollars, according to his Senate disclosures. In West Virginia terms, Manchin has been a member of the gentry—corporate, political, and personal—for decades.

As the child of a small mining community in the Ozarks, I relate to this. It’s common for rural communities to have their own version of the “1 percent,” a small number of families that seem to have plenty of money and manage to run everything. They don’t experience poverty even when living next door to it. I say Manchin probably suffers from what might be called J.D. Vance syndrome. He is utterly obvlivious to the historic and systemic reasons why rural people, white and black, remain locked into poverty. He was born into an affluent family with many advantages and doesn’t understand why those who weren’t can’t be just as successful as he is. And people like Manchin are the ones who end up deciding what problems government will address.

And so the rural poor are voiceless and unheard, which is a big reason a lot of rural whites are angry and have attached themselves to Trump. He hasn’t done bleep for them, but it feels to them that he is some kind of champion. Because of the saturation of right-wing media many don’t actually understand how the government works or what policies do, so they can be easily misled by somebody who communicates in their emotional frequency. This is especially true if the frequency includes some racist dog whistling. Note that 93.5 percent of the population of West Virginia is white.

So, they are not always faultless people. But that doesn’t make them all lazy drug addicts. Rural farming and mining areas have been left behind economically over the past several decades. There is much less opportunity than there was 50 years ago. But moving and starting over somewhere else may be too much of a hurdle, for a lot of reasons both financial and sociological. Helping these people really will take something like a New Deal. It’s not going to happen otherwise.

Joe Manchin is a conservative Democrat. As such, he fears deficits, distrusts the poor, champions fossil fuels, and reveres the Pentagon. Manchin believes that the national debt is a threat to our grandchildren; that giving cash aid to the idle poor only encourages lassitude; that an excessively rapid green transition is a bigger threat than climate change; that the United States cannot afford to cut its military spending; and that there is a limit to how much the nation can increase taxes while keeping its business environment “competitive.” …

… Much of Manchin’s worldview is deluded, classist, and wholly incompatible with meeting the challenges that the United States faces in the present moment. Manchin’s deficit-phobia is premised on basic misunderstandings about the nature of sovereign debt. His fear that providing cash aid to indigent families would only trap them in dependence is rooted in hateful folk wisdom, not actual social science (studies have demonstrated that giving unconditional cash benefits to low-income parents does not significantly depress their labor-force participation, but does improve their kids’ later-life outcomes, in part by increasing their labor-force participation). His stalwart support for ever-higher military budgets is born of a delusional faith in both the wisdom and plausibility of America’s absolute global dominance. His skepticism of green-energy subsidies proceeds from some admixture of his family’s financial interests and his region’s understandable yet destructive nostalgia for a long-dead coal economy.

The argument that Bette Midler is an “elitist” but Joe Manchin is not doesn’t sit well with me. Midler probably knows nothing about life in Appalachia, but that’s not her job. It is Joe Manchin’s job, and he’s failing. He looks down his nose at his impoverished constituents and declares they’d just blow the child tax credit on drugs. He thinks givng people money discourages them from taking jobs but doesn’t want to fund day care so that women with children can take jobs.

And while the coal industry isn’t dead yet, it is dying. It is not helping anybody to pretend otherwise. I know what it’s like when mines close. Once there were a steady supply of jobs in a community. Often these are union jobs. Years ago, the boys could graduate from high school and get hired by the mining company the following week, and if they consistently showed up sober and on time to do the work, they were probably set for life. They could buy houses and pickup trucks and vacations in the summer. They had health benefits and a retirement plan. Those salaries also supported construction companies and car dealerships and a lot of retail businesses. When the mines closed, it wasn’t just the miners who lost income, but the entire community. Mining towns are often one-industry towns. And if the community is rural and isolated, good luck finding other industries to take the place of the mines.

And this is not unlike the problem of the loss of manufacturing jobs in the U.S., which remains unsolved even though everybody knows about it. It remains unsolved because some people are making too much money the way things are.

The precise nature of Manchin’s stance on BBB’s climate provisions is difficult to pin down, but two new developments help illuminate it.

First, the United Mine Workers of America just called on Manchin to reconsider his opposition to BBB. Second, the New York Times just published an expose of the coal industry’s apparent success in shaping Manchin’s stances.

Yep; the United Mine Workers begged Manchin to support Build Back Better. The Union members aren’t stupid; they know the old coal mining industry is fading away. They are keenly interested in how the transition to new energy sources will be managed. The BBB bill provided incentives for alternative energy industries to build manufacturing plants in coal-producing areas. This would be great for West Virginia.

Manchin’s objections to the BBB energy investments are nonsensical. He thinks a fast transition will create chaos. He thinks somehow this transition will lead to more fiascos like last winter’s power outages in Texas (which had nothing to do with windmills, remember). And coal industry executives and lobbyists have persuaded Manchin that investing in solar power somehow will benefit China.

Of course, there’s also the half million dollars Manchin gets every year from coal industry dividends. That’s a strong argument for the status quo, right there.

At the New Yorker, Evan Osnos points out that Manchin has a long habit of not meeting with constituents. Especially people who want to talk to him about West Virginia poverty or West Virginia jobs scarcity talk to his office staff, not the Senator. This inspired some of his constituents to surround his yacht — which he calls his “houseboat” — in a little flotilla of kayaks. It’s the only way they could talk to him.

Not exactly a man of the people, are you, Senator? 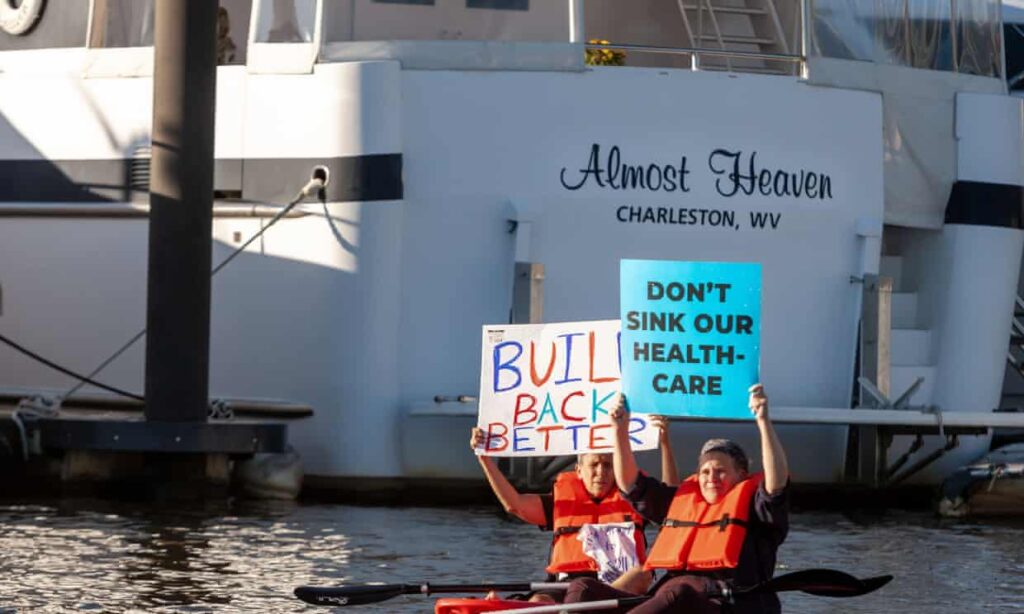