Yesterday when news of the Brooklyn subway shooting spread through the Web, righties were practically gleeful blaming “defund the police” Democrats for violent crime in big cities.

But here’s the thing — homicide rates are actually higher in places Republicans are in charge. Behold: 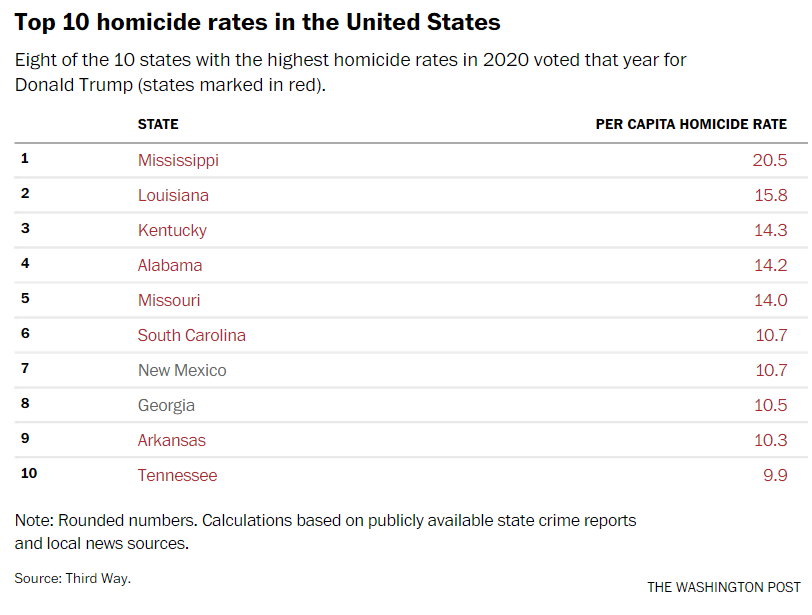 The homicide rate in New York City was 5.5 killings per 100,000 people last year, according to several sources. That’s an increase from what it was in recent years, but way lower than what it was in the 1980s and 1990s.

The report further points out that the homicide rate averaged across all states that went for Trump was 40 percent higher in 2020 than the homicide rate in all states Joe Biden won. And six out of the 10 states with the greatest increase in homicide rates over 2019 levels voted for Trump, including McConnell’s Kentucky — which saw a 58 percent spike.

I haven’t seen any analyses of why this is true, but I postulate a correlation between rates of gun ownership and homicide. Also, the story about murder rates tends to get buried under the number of murders, which of course will be higher in big cities than in small cities and rural areas.

Those are points I made in old posts about Chicago, a place beloved among righties for allegedly being the murder capital of America. See The Truth About Chicago (2017) and Kill the Chicago Myth (2018). Rates of gun violence in Chicago are too high, but are way lower than several other cities.

It’s true that St. Louis has a Democratic mayor, but Missouri has among the most lenient gun laws in the nation. Truly, I can’t imagine what else the legislature could do to make carrying any damnfool firearm you want any easier. (Well, there was the right-to-murder law, but it died in committee, I understand.) And it seems to me that every time the legislature passes more “pro gun” legislation, the murder rate goes up. Which state (not counting the District of Columbia) is worst for gun carriers, according to gun activists? New York.

Last year St. Louis city and county sued the state over the nutty “Second Amendment Preservation Act” that nullfies any federal law that the right-wing wackjobs in the state legislature decide violates the 2nd Amendment. The U.S. Justice Department also sued. There’s been no resolution yet.

Righties also were quick to blame “defund the police” on rising violent crime, kind of ignoring that there’s been little actual defunding. In fact, several of the “top ten” homicide cities had recently increased police funding. There appears to be no correlation between decreases or increases in police funding and rising crime rates.

(I see television ads for political campaigns in Illinois, and a mess of Republicans are running to replace the Democratic governor, J.B. Pritzker. I like J.B. He’s sensible and has done a pretty good job of cleaning up the messes left by the last governor, a Republican. But all the people running against him are “tough on crime” types. They all brag about how conservative they are and how much they love cops. One wants us to know he loves Jesus, too. Nothing about schools or health care or fixing infrastructure. Let’s hope J.B. gets another term.)

6 thoughts on “Republicans and Violent Crime”