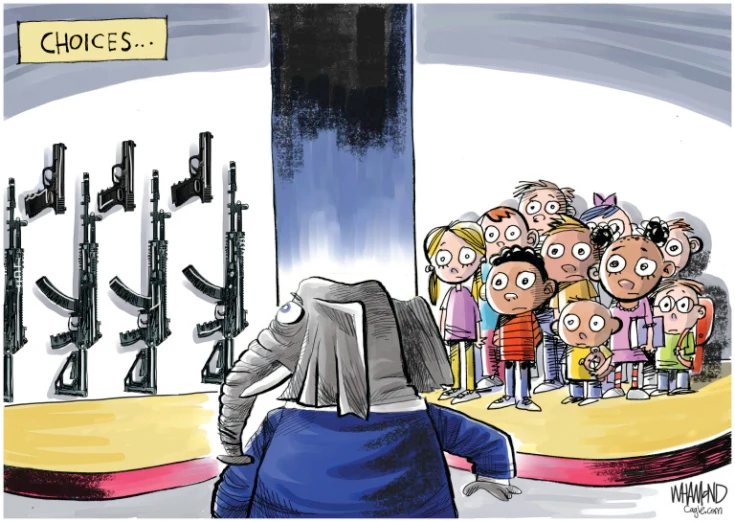 For all the conversation about common sense and compromise, these are the two fundamental choices: The answer to preventing future tragedy is either fewer guns or more.

At their core, these philosophies do not form a Venn diagram. They are ideologically distinct and incompatible worldviews.

Yes, which doesn’t leave us much space in which to compromise. Oh, and as of this morning there have been eleven mass shootings in the U.S. this Memorial Day weekend.

The Texas Tribune article is very much worth reading. It tells a story that begins with the Luby’s Cafeteria shooting in Killeen, Texas, in 1991. One of the survivors, Suzanna Hupp, came away from the experience convinced that if she had been allowed to carry a firearm into the cafeteria she could have saved a lot of lives. So she began a crusade to loosen gun laws, especially to allow concealed carry. Since then active shooter incidents have become a lot more common, not less. 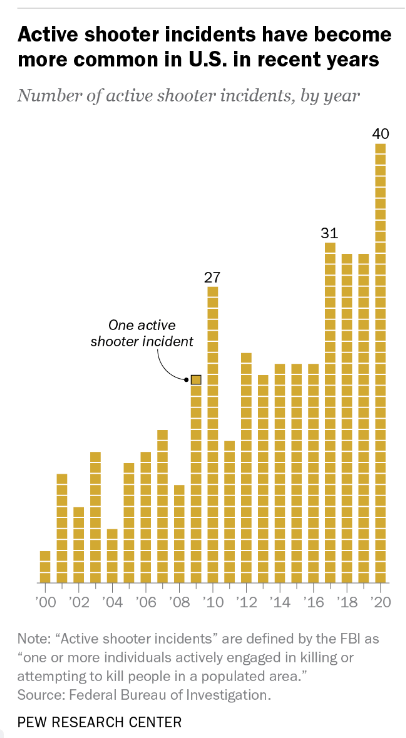 For years, the Right has argued that more guns equals less crime. A lot of these arguments go back to John Lott’s highly discredited 1988 book, More Guns Less Crime. Since 1988 a huge amount of data has been gathered that shows more guns do not equal less crime of any sort, and in fact more guns correlate directly to more gun homicides as well as others kinds of deaths by firearm.

Of course, the NRA talking points always use the word “crime” instead of “deaths,” the idea being that only crimes are a cause of concern and that deaths by accident or suicide don’t count. (Apparently, homicide doesn’t count, either.) “Crime” connotes a “criminal” who is doing something bad to “law-abiding citizens.” NRA rhetoric always separates humanity cleanly into “good guys” and “bad guys,” although in the real world the line of separation often is pretty damn blurry and is easily crossed.

Lott is also the originator of the claim that mass shootings only take place in “gun-free zones,” even though that’s hardly ever been the case in recent years. You can’t even say that Robb Elementary School was a strict gun-free zone. There was supposed to have been an armed security officer there, and Texas has programs that enable public school teachers and other staff to carry guns in the school, although I haven’t heard that any Robb Elementary staff had taken part in that program.

I wrote back in 2016 about a mass shooting in Dallas that took the lives of five police officers. This had been at a demonstration against police shootings, and a number of protesters and counter-protesters showed up armed with AR-15s and wearing gas masks and bullet-proof vests. When the shooting started (by a sniper from a perched position) they all began to run, and police later complained the number of armed suspects at the scene created chaos. But that was hardly a gun-free zone.

I found a 2020 Rand study that said there are “no qualifying studies” showing that “gun free zones” in the U.S. are safer or less safe from gun violence than other zones. Some of the claims about there being more mass shootings in gun-free zones were based on data that cherry picked what qualifies as a “mass shooting” and how “gun free zones” are defined; for example, for some reason, the presence of armed guards or law enforcement may not disqualify a zone as gun free.  .

For that matter, how often has an armed citizen stopped a mass shooter? Hardly ever.

[E]xpansive research out of Stanford University found states that passed right-to-carry (RTC) concealed handgun laws saw between a 13 to 15% increase in violent crimes in the 10 years after. The data spanned stats from the 1970s up until 2014.

Yep, that says increase, not decrease.

“There is not even the slightest hint in the data that RTC laws reduce overall violent crime,” Stanford Law professor John Donohue stated in the paper.

Previous research on this topic came to similar conclusions, though noted not enough data was currently available.

In 2019, KXAN News in Austin worked with the ALERRT Center at Texas State University to compile data on 316 mass shootings in Texas between 2000 and 2019. The data showed that citizens stopped shooters 50 times out of 316 but only 10 of those instances were by using a gun. The other 40 times, the citizen used either their hands or another weapon.

It seems to me that what the data are telling us is that when citizens are more and more armed in public there is more and more shooting in public. The increase in shooting fatalities and injurites overwhelms the tiny number of shootings prevented or stopped by an armed citizen. More often than not, when citizens stop mass shooters they don’t use a gun to do it. The numbers tell us that all this arming of citizens makes us less safe, not more safe.

Even this week, at the NRA convention in Dallas, Trump and other gun apologists were calling for an end to gun free zones. No one was allowed to be armed in the conventional hall where this was said, I understand.

Let’s look at I’m from Uvalde. I’m not surprised this happened. by Neil Meyer in the Washington Post:

First, you would be challenged to find a more heavily armed place in the United States than Uvalde. It’s a town where the love of guns overwhelms any notion of common-sense regulations, and the minority White ruling class places its right-wing Republican ideology above the safety of its most vulnerable citizens — its impoverished and its children, most of whom are Hispanic.

Note that Ulvade appears to have above-average crime rates in spite of all these guns being carried by the law-abiding citizens. Go figure.

Yet, in spite of all the data, the “more guns” people are in control and write the laws. Republican state legislatures push harder and harder to eliminate any barriers to owning and carrying whatever firearm one wants. Every time there’s another attention-grabbing mass shooting they trip all over themselves to prove their loyalty to guns by loosening the gun laws even more.

Why are we all so helpless to stop this? A big one is the anti-democratic Senate, which not only overrepresents rural voters but also keeps the filibuster rule that allows those rural voters veto power over what the majority of Americans want. See The Real Reason America Doesn’t Have Gun Control by Ronald Brownstein in The Atlantic.

[T]o imagine something different, we have to understand the ideology that created our current legal regime. It was constructed on a foundation of fantasy and terror, one that elevates imaginary threats and decrees that our response to those threats can only be confronted by each of us alone, never through the institutions we create or the government that represents us.

No, only the isolated, heavily armed, perpetually terrified individual can hope to keep his family safe — so don’t even think about changing the laws, unless it’s to put more guns in more people’s hands.

Keeping them afraid is also very good at getting them to turn out to vote for Republicans.

What kind of fantasies are we talking about? The most important is that the U.S. government — the one designed by those sainted Framers whose genius conservatives praise so often — is always moments away from devolving into totalitarian oppression, and all that keeps it from happening is its fear of an armed populace ready to start killing soldiers and cops.

So after the killings in Uvalde, Tex., a Florida state representative tweetedan explicit threat to kill the president of the United States: “I have news for the embarrassment that claims to be our President — try to take our guns and you’ll learn why the Second Amendment was written in the first place.”

Of course, being perpetually ready to overthrow the government has nothing whatsoever to do with why the Second Amendment was written in the first place. That’s a fantasy.

This idea of a world of chaotic violence saturates conservative media (where antifa and Black Lives Matter are forever burning down cities and coming to destroy your community) and the rhetoric of gun groups and gun enthusiasts. It’s absolutely central to that message that no collective or governmental response will protect you and your family. The cops won’t get there fast enough, laws don’t stop “the bad guys,” and in the end you are atomized and alone, left to either kill or be killed.

So people keep guns in their homes for “protection,” which makes them more and not less likely to die by firearm. But you can’t tell the fearful people that.

There’s a lot of untruths about gun laws in circulation, like the Chicago Myth that says Chicago has the nation’s toughest gun laws and the highest firearm homide rates. Neither assertion is true. Today I ran into a guy ranting that “Democrat cities” like St. Louis are the cause of all the firearm deaths. St. Louis may be the firearm homicide capital of the nation right now. It may have a Democratic mayor, but its gun laws are just about identical to those of Texas, courtesy of the righter-then-right Republican state legislature. And the state legislature won’t allow the city to pass stricter laws.

On top of that, I believe that all the fear-mongering, all the rhetoric that pits us against them, also pushes people toward more violence. To keep power, Republicans are causing the violence they want voters to fear. And it keeps escalating.

Next: Getting smarter about gun violence.

12 thoughts on “Choosing Guns Over Children”