Judge Aileen Cannon is now hearing Trump’s case for getting a special master to review the documents seized by the FBI at Mar-a-Lago. If she has half a brain she’ll say no. I bet the DoJ already has an appeal ready to file in case she says yes.

Last night Trump’s new lawyers — the old ones are too compromised to continue — filed a response to the DoJ’s argument against a special master. The weirdest thing I’ve read about it is that it argues people should have expected that Trump would be keeping classified documents in his home. CNN:

Former President Donald Trump argued in a court filing Wednesday that the National Archives should have expected to find classified material among the 15 boxes Trump turned over in January from Mar-a-Lago because they were presidential records.

The filing, his closing written legal argument before a critical hearing Thursday, acknowledged that classified material was found at Mar-a-Lago, but argued that it should not have been cause for alarm — and should not have led to the search of Trump’s Florida residence earlier this month.

I believe this is referring to this language on page 3 of Trump’s filing.

The fact that NARA  had been trying to recover those documents since spring of 2021, and continued to try to work with Trump to recover the documents from January until August 8, when the FBI executed the search warrant, kind of plants this statement in the Land of Eternal Giant Face Palms. Here’s a timeline of all the backing-and-forthing between Trump and NARA.

The Presidential Records Act is clear that absolutely none of those records, sensitive or not, should have been taken to Mar-a-Lago. The only correct thing for Trump to have done, beyond not taking the documents in the first place, would have been to turn all government documents over to NARA in May 2021, when NARA first asked for them. But he didn’t. If the judge gives even a glimmer of credence to Trump’s argument here, the judge is corrupt.

Suddenly, they contended that the documents were indeed there, but they were Trump’s “own Presidential records.” And not only did the Trump team again decline to actually claim in court that he had declassified the documents; the team said it would be “appropriate” for the special master it wants to review the documents “to possess a Top Secret” security clearance.

It’s not the first time Trump’s legal strategy hasn’t matched his out-of-court bluster. But it was the most significant indication to date of the asymmetry between the two.

Instead, Trump’s new legal team is arguing that Trump was not doing anything unlawful by hanging on to his presidential records. Aaron Blake:

It derides the idea that Trump “has ‘no right’ to possess Presidential documents” and that he “illegally” possessed them.

Not enough face palm GIFs in the world, I say. I liked this bit, too, in which Trump’s lawyers argue that Trump does too have standing to object to a search of his home. This is from Trump’s filing:

The convoluted theory, which appears to be that the Biden administration will not allow President Trump to assert executive privilege and consequently he has “no right” to possess Presidential documents, and that, therefore, he has no standing to object to their seizure, is contrary to the well-established doctrine of standing.

The lawyers on MSNBC last night were calling this filing nonsense, or similar. I don’t think they even wanted to waste time and breath making specific objections. It was all too ridiculous.

Other stuff to read: See Steve Benen, MSNBC, What Republicans refuse to grasp about the ‘Clinton standard’. Also see Greg Sargent, A Trump lawyer’s ludicrous spin on ‘Hannity’ unmasks the Fox News ruse. This is about what Fox News viewers are hearing about the legal fight over the document.

Also, too, Trump and his accounting firm have reached a deal to give financial records to the House Oversight Committee. This puts an end to one of the several pending lawsuits Trump is dealing with. However, this isn’t all of the financial records. 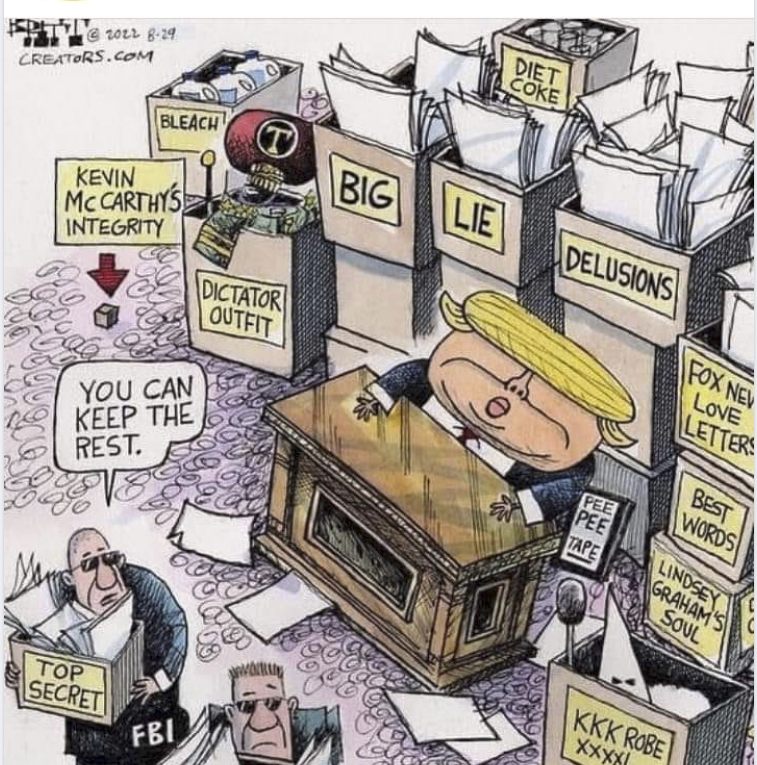