I honestly don’t know that much about Charlie Crist, who is running against Ron DeSantis for governor of Florida. I do remember he was governor of Florida before, but I don’t recall his record. However, I went to his “issues” page on his campaign website, and he’s running on good stuff now. I see reproductive rights, voting rights, housing, environment, etc. Click on the plans, and read what he proposes. Good stuff.

Ron DeSantis is running on being an asshole.

You can see the same thing in Texas. Beto O’Rourke has some definite proposals he’s running on, like a promise to end permitless carry of firearms. Which is damn gutsy for Texas.

It’s fairly obvious, however, that Greg Abbott is mostly running on being an asshole.

Case in point: Greg Abbott is using our tax dollars by the billions to take 10,000 members of the Texas National Guard away from their families, careers, and communities to serve as the backdrop for his photo ops at the border, even though they have zero authority to arrest or detain migrants. All the while, he has degraded their service, delayed their pay, and slashed their earned tuition benefits in order to afford their ongoing deployment. All he has done in his seven and a half years in office is pose tough at the border while doing nothing to make us any safer—the definition of a stunt instead of a solution.

The recent stunts of sending undocumented immigrants to blue cities is assholery cranked up to the infinite power. Take the flight from San Antonio TEXAS to Martha’s Vineyard, courtesy of the governor of FLORIDA. DeSantis didn’t have enough of his own undocumented immigrants to mess with, so Greg Abbott let him have some in Texas. Wow. (This could yet blow back on DeSantis; people were lured onto the plane under false pretenses. The DoJ has been asked to investigate. Possible kidnapping charges have been mentioned.)

DeSantis’ administration is only allowed to “transport unauthorized aliens from this state,” according to budget language approved by state lawmakers this year. The governor’s office did not immediately respond when asked whether the migrants had moved to Florida or whether the state-funded program helped transport migrants from another state. DeSantis provided no details about the flights during a Thursday news conference.

I’m betting the Crist campaign is producing new television ads on this very issue, as I keyboard this. I understand there’s also concern DeSantis may have used covid relief money for this little stunt.

Jeremy Redfern, a DeSantis spokesperson, embraced the comparison to illegal traffickers. In response to a complaint that DeSantis neglected even to give advance notice to Martha’s Vineyard so it could prepare accommodations, Redfern sniffed that coyotes don’t do this:

Do the cartels that smuggle humans call Florida or Texas before illegal immigrants wash up on our shores or cross over the border? No.

Welcome to being a state on the Southern border, Massachusetts. https://t.co/pkjWYnznna

The premise is that DeSantis has no obligation to take any more interest in safeguarding human welfare than an illegal smuggling operation does.

This is ultimately about “owning the libs,” of course. But it sounds as if the libs haven’t been owned yet. The people of Martha’s Vineyard did not melt down, as expected, but instead rallied to provide food and shelter to the 50 Venezuelan refugees who had shown up with no advance notice. Today I’m reading that Massachusetts Gov. Charlie Baker is sending the 50 refugees to a facility on Cape Cod that’s been used as a shelter in the past, with some National Guard called up to help them out until somebody decides what happens next. 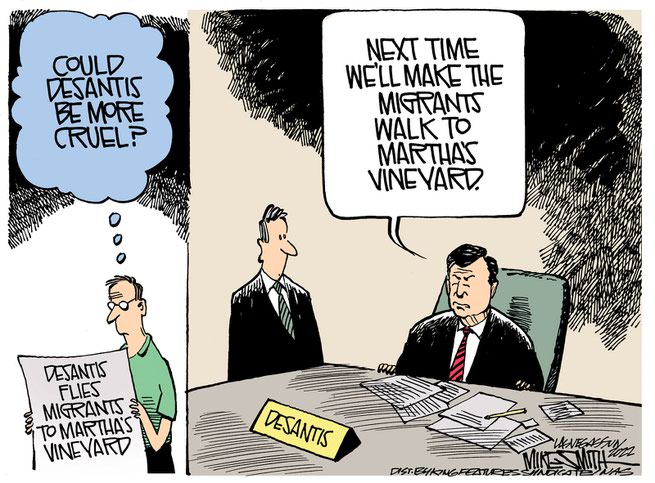 24 thoughts on “The GOP Is Running as the Asshole Party”