Former president Donald Trump’s namesake company was convicted Tuesday of tax crimes committed by two of its longtime executives after a Manhattan trial that gave jurors a peek at some of the inner workings of the Trump Organization’s finances.

The company was charged with scheme to defraud, conspiracy, criminal tax fraud and falsifying business records.

In other news, Special Counsel Subpoenas At Least 5 Key Counties For Trump Comms Around 2020 Election.

TPM has reviewed a subpoena issued to the Milwaukee County Clerk, dated Nov. 22.

The subpoenas went to at least five counties in swing states where the Trump campaign sought to reverse the election results in 2020.

They are Dane County, Wisconsin, Maricopa County, Arizona, and Wayne County, Michigan, the Washington Post reported. TPM confirmed Tuesday that another subpoena was sent to officials in Allegheny County, Pennsylvania, and received a copy of the subpoena issued to Milwaukee County.

Today’s the day — with any luck — we’ll finally see the end of the 2020 midterms. The FiveThirtyEight nerds say that Warnock has a slight lead, but Walker could still win. To me, that there are people bright enough to dress themselves and eat with a fork who will still vote for Walker is what’s wrong with America.

For example, the Atlanta Journal-Constitution interviewed a voter who said he was voting for Walker because he was afraid the Democrats would regulate cryptocurrency.

According to the Atlanta Journal-Constitution: One complication of the race today is that there was a libertarian candidate for the Senate seat in the November 8 election who ran a very distant third. But because this was a ranked choice vote, whoever those voters listed as their second choice will get those votes today. That seems weird, especially since those same voters are eligible to vote in today’s election. I question whether that’s accurate. But it is worrisome. Libertarians would probably have picked Walker over Warnock.

Awhile back I noted that the National Republican Senatorial Committee, still headed by Rick Scott, was sending out fund raising appeals ostensibly to elect Herschel Walker, but only one cent of every dollar donated was actually going to Herschel Walker’s campaign. Now the Salt Lake Tribune is reporting that  Utah Sen. Mike Lee and Rep. Burgess Owens are doing something similar.

Utah Sen. Mike Lee and Rep. Burgess Owens are raising money on behalf of Herschel Walker ahead of Tuesday’s Senate runoff election against Democrat Sen. Rafael Warnock, warning the Georgia Republican could be the final bulwark against President Joe Biden’s agenda. It is not immediately apparent to donors that half of the money they contribute will go to Walker’s campaign, while Lee or Owens keeps the other half.

Well, at least half the money being raised for Walker is going to Walker. That’s better than what the NRSC was doing. But Mediaite is reporting that lots of people in the GOP are pulling this same trick — sending out fundraising appeals for Walker but keeping a chunk of the donations for their own campaign committees or PACs. Names dropped include Donald Trump, J.D Vance, and Ted Budd. Meanwhile, money raised to re-elect Raphael Warnock is all going to Raphael Warnock. 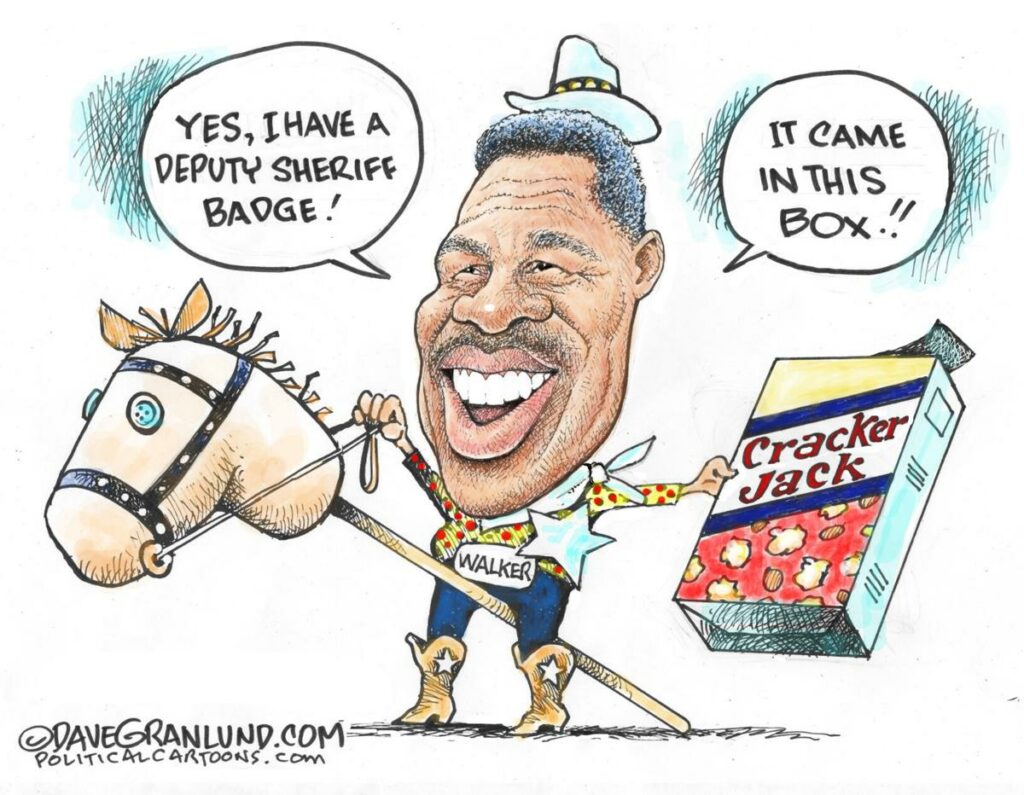