So Kyrsten Sinema has left the Democratic party and re-registered as an independent to shake up the Senate. The way I see it, she just primaried herself.

Arizona Sen. Kyrsten Sinema has done the inevitable: She is leaving the Democratic Party.

In an interview with CNN’s Jake Tapper, the first-term senator said her decision to register as an independent in her home state “makes a lot of sense,” and that she won’t caucus with Republicans, meaning her decision won’t upset the balance of power in the US Senate after the reelection of Sen. Raphael Warnock of Georgia that gave Democrats a 51-49 majority earlier this week.

She told Tapper, “When I come to work each day, it’ll be the same,” Sinema said. “I’m going to still come to work and hopefully serve on the same committees I’ve been serving on and continue to work well with my colleagues at both political parties.”

Paul Campos at Lawyers, Guns and Money: “My favorite detail in this is that she won’t commit to caucusing with the Democrats, but she expects to keep all her committee assignments!” Yeah, that’s a knee slapper. The other Senate independents, Bernie Sanders and Angus King, formally caucus with Democrats and are counted as Dems as far as committees are concerned. Sinema possibly hadn’t thought that one out.

She becomes the first senator to leave her party since Sen. Arlen Specter (D-Pa.) in 2009.

Like Specter, Sinema looked set to face an arduous primary if she sought reelection with her former party, given the maneuvering of Rep. Ruben Gallego (D-Ariz.) to run against her. So the move makes some sense for her personally.

But what about the political impact more broadly?

The first thing to note is that it remains unclear whether Sinema will continue to caucus with Democrats, as two other independents in the Senate do. When asked about this, Sinema spokesman Pablo Sierra-Carmona said merely that “she intends to maintain her committee assignments from the Democratic majority. She has never and will not attend caucus messaging or organizational meetings.”

That sounds like she would effectively caucus with Democrats — that is, align with them for purposes of organizing the Senate — but for some reason is avoiding saying so directly. And she has said she’s not sure whether her desk will remain on the Democratic side of the Senate. Asked by CNN’s Jake Tapper whether her move would change the balance of power in the Senate, she responded, “that’s kind of a D.C. thing to worry about.”

This question doesn’t immediately matter when it comes to whether Democrats will retain the Senate majority, but it does matter. They will have at least a 50-49 edge as long as Sinema doesn’t caucus with the GOP. But if her plan is to leave the Democratic caucus, that would make Sen. Raphael G. Warnock’s (D-Ga.) win in Tuesday’s runoff potentially hugely significant.

She’s up for re-election in 2024, and her running as an independent will probably mean she’ll be replaced by a Republican in 2025. I can’t imagine why she would think she could win as an independent. 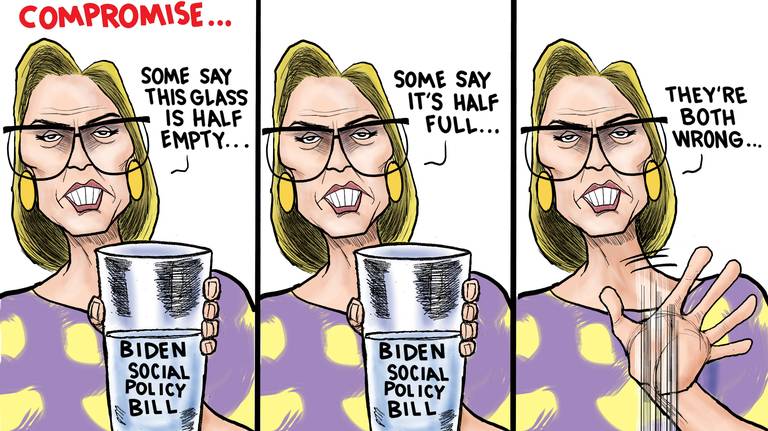