William Saletan wrote a highly annoying article in Slate that argued “technology” would somehow resolve the abortion wars. I say “annoying” because it contains some misinformation — for example, he says that the gestational point of possible viability is earlier now than it was in 1973 when Roe was decided. It actually isn’t; the limit was 23 weeks in 1973, and it’s still pretty much 23 weeks now, “lifer” mythology to the contrary. Scott Lemieux has already written a good response to much of Saletan’s article; see also Amanda Marcotte.

For now, I want to pull out just one paragraph from the Saletan article to complain about. He writes of Roe v. Wade,

Politically, legally, and technologically, the 33-year-old court decision is increasingly obsolete as a framework for managing decisions about reproduction. But pro-lifers can’t launch the post-Roe era, because they’re determined to abolish its guarantee of individual autonomy, and the public won’t stand for that. Only pro-choicers can give the public what it wants: abortion reduction within a framework of autonomy.

What the hell does that mean? That pro-choicers have to be the grown-ups who find a compromise solution, because the little anti-choice children can’t?

Regarding reducing the number of abortions — it might be useful to take a look at which nations have the lowest abortion rates to see what they’re doing right. I found the chart below in this Alan Guttmacher report. 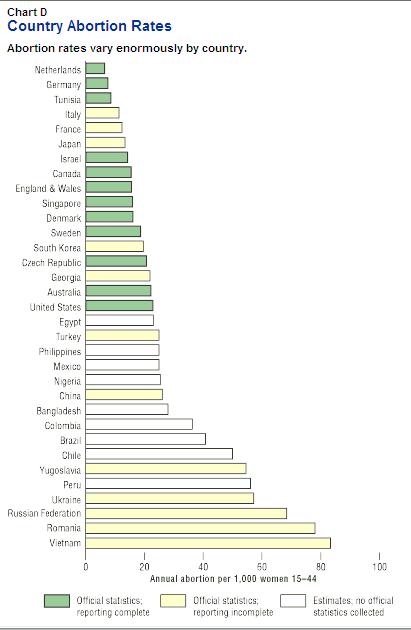 And look who has a way lower abortion rate than the U.S. — The Netherlands. Possibly the most liberal nation that ever was. I’m not sure if The Netherlands is still #1 as of most recent data (the chart dates from 1999), but on the whole the nations of western Europe have lower abortion rates than anywhere else on the planet. And the nations of eastern Europe have some of the highest rates, even though there isn’t a real big difference in abortion law between eastern and western Europe. As I argued here, there is no correlation whatsoever between abortion rate and abortion law.

Somewhere there are probably lots of lovely social-psychological research studies, complete with p values and N squares, that show which values in a society might also lower abortion rates. Without those, however — if we look at The Netherlands and some of these other countries that are successful at reducing abortions we might form hypotheses. We might speculate that openness about sexuality is an abortion-reducing factor. People who are open about their sexuality are more likely to be prepared for it. This includes providing young people with factual information on contraception.

As Saletan points out, there have been some improvements in birth control methodology since 1973. But all the improvements in the world won’t help if the technology is banned, or if the local druggists won’t fill prescriptions, and young people become sexually active before they understand exactly how the baby gets into the cabbage patch.

Thus, I get a little tense when moralizers like Saletan wag their fingers and say you liberals are going to have to find a solution. I believe we already have. And I also believe there is no way to compromise with the anti-choice trogs and also lower abortion rates. So if that’s our assignment, we are doomed to fail.

Frankly, the only way to bring about the desired result –abortion reduction within a framework of autonomy– is to reduce the power of the trogs so that liberal reproduction policies might flourish throughout the land, unimpeded.

In recent years there’s been a lot of overheated rhetoric, much of it from Saletan, about how liberals can recapture the moral argument to abortion. But I think there’s an easier way. Just run the Bill Napoli virgin rant in television and radio ads, followed by a catchy closing line — something like “This guy wants to regulate your personal life. Is this OK with you?” Anyone who still cares about personal autonomy will get the hint.

5 thoughts on “Abortions and Autonomy”