Long-time Mahablog readers probably have noticed I am ambivalent about protest marches and demonstrations. Even though I take part in them now and then, on the whole I don’t think they have much of an effect.

Ah-HAH, you say. The immigration marches just showed you. So why isn’t the antiwar movement marching all the time?

Sometimes it ain’t what you do, but the way that you do it, that matters. Some demonstrations have changed the world. But in my long and jaded experience some demonstrating is a waste of time. Some demonstrating is even counterproductive. What makes effective protest? I’ve been thinking about that since the big antiwar march in Washington last September (when I suggested some rules of etiquette for protesting). I started thinking about it more after Coretta Scott King died, and I saw photos like this in the newspapers: 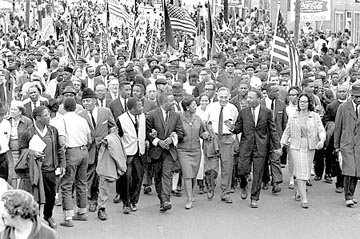 What’s striking about that photo? Notice the suits. Yeah, everybody dressed more formally back in the day. But it brings me to —

The great civil rights marches of the 1950s and 1960s should be studied and emulated as closely as possible. People in those marches looked as if they were assembled for a serious purpose. They wore serious clothes. They marched both joyously and solemnly. They were a picture of dignity itself. If they chanted or carried signs, the chants or signs didn’t contain language you couldn’t repeat to your grandmother.

The antiwar protests I’ve attended in New York City, by contrast, were often more like moving carnivals than protests. Costumes, banners, and behavior on display were often juvenile and raunchy. Lots of people seemed to be there to get attention, and the message they conveyed was LOOK AT ME LOOK AT ME LOOK AT HOW CLEVER I AM, not NO IRAQ WAR. Really. Some street theater is effective — I am fond of Billionaires for Bush — but most of the time street theater is juvenile and tiresome and reminds me of bad summer camp skits. Except raunchier.

Which takes me to —

Rule #2. Be unified of purpose.

One of my ongoing gripes about antiwar marches is the way some groups try to tack their own agenda, which many others in the demonstration may not share, onto marches. International A.N.S.W.E.R. is a repeat offender in this category. Most of the marchers last September were in Washington for the sole purpose of protesting the war. But ANSWER hijacked CSPAN’s attention and put on a display so moonbatty it made The Daily Show; see also Steve Gilliard.

Message control is essential. During the Vietnam era, I witnessed many an antiwar protest get hijacked by a few assholes who waved North Vietnamese flags and spouted anti-American messages, which is not exactly the way to win hearts and minds —

I know they’re called “protests,” but your central purpose is to win support for your cause. You want people looking on to be favorably impressed. You want them to think, wow, I like these people. They’re not crazy. They’re not scary. I think I will take them seriously (see Rule #1). That means you should try not to be visibly angry, because angry people are scary. Anger is not good PR. Grossing people out is not good PR. Yelling at people that they’re stupid for not listening to you is not good PR. Screaming the F word at television camera crews is not good PR.

Size of crowds, that is. Remember that one of your purposes is to show off how many people came together for the cause. But most people will only see your protest in photographs and news videos. More people saw photographs of this civil rights demonstration in August 1963 than saw it in person —

The number of people who marched for immigration reform over the past few days was wonderfully impressive. It’s the biggest reason the marches got news coverage. The overhead shots were wonderful. On the other hand, last September I wrote of the Washington march —

The plan was to rally at the Ellipse next to the White House and then march from there. Only a small part of the crowd actually went to the Ellipse, however. Most seem to have just showed up and either stayed in groups scattered all over Capitol Hill, or else they just did impromptu unofficial marches as a warmup to the Big March. … It would have been nice to get everyone together for a mass photo, but that didn’t happen. Too bad. It would have been impressive.

As I waited on the Ellipse I could see vast numbers of people a block or two away. The Pink Ladies had a big contingent and were busily showing off how pink they were — LOOK AT ME LOOK AT ME LOOK AT HOW CLEVER I AM — but they seemed to evaporate once the official march started. (Re-read Rules #1 and #2.)

Anyway, as a result, there were no photos or videos to document for the world how big the crowd really was. You had to be there.

A sub-rule — IMO, an occasional REALLY BIG demonstration that gets a lot of media attention is way better than a steady drizzle of little demonstrations that become just so much background noise..

Rule #5 — Be sure your opposition is uglier/more hateful/snottier than you are.

In the 1950s and 1960s white television viewers were shocked and ashamed to see the civil rights marchers — who were behaving nicely and wearing suits, remember — jeered at by hateful racists. And when those redneck Southern sheriffs turned fire hoses and attack dogs on the marchers, it pretty much doomed Jim Crow to the dustbin of history. I think Cindy Sheehan’s encampment in Crawford last August, although a relatively small group, was such a success because of the contrast between Sheehan and the Snot-in-Chief cruising by in his motorcade without so much as a how d’you do. Truly, if Bush had invited the Sheehan crew over for lemonade and a handshake, the show would’ve been over. But he didn’t.

Rule #6 — Demonstrations are not enough.

Remember, speaking truth to power is just the first step. The goal is to get power for yourself.

Any more rules you can think of?

Update: I’ve posted a revised version of this post at Kos Diaries and American Street.