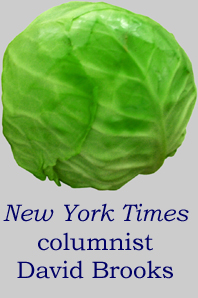 If you want an instrument to measure how imperfectly the “MSM” reflects actual reality, look no further than the current media pile-on of Markos Moulitsas. Today David Brooks jumps in.

They say that the great leaders are gone and politics has become the realm of the small-minded. But in the land of the Lilliputians, the Keyboard Kingpin must be accorded full respect.

The Keyboard Kingpin, a k a Markos Moulitsas ZÃºniga, sits at his computer, fires up his Web site, Daily Kos, and commands his followers, who come across like squadrons of rabid lambs, to unleash their venom on those who stand in the way. And in this way the Kingpin has made himself a mighty force in his own mind, and every knee shall bow.

Oh yes, the Mighty Kos, who last Thursday was seen sitting quietly in the corner of the Lotus lounge while a roomful of rabid lambs debated the lamb business. “It’s not about me,” he responded, wistfully, to a question — I didn’t hear the question — and this lamb concurs. While I appreciate Kos’s skill at connecting blogging to the fleshly political world, I don’t actually read Kos all that much. No offense, Kos, but I don’t. On my list of blogs I try to read frequently Daily Kos comes in at about #20, meaning I don’t get to it more than once or twice a week.

Nor are Kos’s ideas accepted unquestioningly among bloggers. For example, among the many bloggers I’ve schmoozed with over the past month, including those at YearlyKos, I can testify there is considerable disinterest in a Mark Warner presidential bid in 2008. This is true even among those of us who went to the infamous Warner party in Las Vegas. And I can’t imagine any leftie blogger endorsing Warner just on Kos’s say so. That’s not how we do things here. As the Green Knight says,

First of all, Kos doesn’t have any followers. He has readers and co-bloggers, sure. But followers? Don’t be ridiculous. We’re talking about progressives, liberals, and Democrats here. You might as well try to herd cats as make people like us get in line.

The cluelessness of MSM pundits is one of the many public outrages that inspired a lot of us to get into blogging; blogging is, at least, more therapeutic than yelling at the TV. Watching and reading some of these bubble-wrapped wonders can be more frustrating than, well, herding cats. But now we have hard proof that their almighty opinions have all the substance of soufflÃ©.

It’s clear that elements among the punditocracy have been incited to take down these blogger people before they get too big for their britches. As Greg at The Talent Show says, “I’d love to get a peek at what’s been getting discussed on their private email list.”

However — and I’m speculating here — I wonder if the real target is Mark Warner and not Kos. After YearlyKos I thought it weird when the Warner party became the subject of much finger wagging, even though other politicians hosted parties for conference attendees. Wes Clark invited us all to a “do” at the Hard Rock Cafe, for example (I passed; I was too tired to go), and two or three congressional candidates held more modest cocktail parties. Yet Mark Warner’s party has been called out as if there were something sinister about a candidate inviting voters to some kind of shindig so he can shake their hands and kiss their babies. Not that I saw any babies at the Warner party, but I trust you get the point.

Where did the finger-wagging campaign originate? Why is the MSM suddenly piling on Kos this week? Is attacking Kos a back-door way of derailing candidates associated with Kos? Like Mark Warner? Or Sherrod Brown? Or Ned Lamont? Who is orchestrating this?

Today Newsweek is running a photo of Kos and Warner together on its web site; I assume the photo is in the print edition as well. And Newsweek reports on the 2004 Howard Dean internet campaign and the current challenge of Joe Lieberman as if these efforts were entirely Kos’s doing instead of the work of many blogs pulling together. As I said in an earlier post, Kos has become the physical manifestation of the blogosphere to people who don’t get blogging. Someone should explain to them that he’s only the tip of a very big iceberg.

In the two previous posts I’ve talked about the allegations of quid pro quo, some of which are absurd on their little red faces, and of the mysterious email that was allegedly written by Steve Gilliard, even though Steve says he has no record of writing it, and sent to the Townhouse listserv, even though no one on the listserv received it. Like the New Republic pundits before him, Brooks holds up the email as evidence of something without questioning its provenance. Way to go.

And these are the pros. These people have editors.

Brooks repeats allegations against Jerome Armstrong that in 2000 he was paid to tout a software stock on the web. The SEC is investigating this. I don’t claim to know what happened. But Brooks passes on the New Republic claim that Kos tried to shush discussion of the SEC story on the web, without noting that TAPPED did write about it. Some “kingpin.”

And Brooks tries to use these allegations to build an implication that Armstrong and Kos are nothing more than old-style influence peddlers. For the other side, which Brooks ignores, see Ezra Klein.

Now, if I were the Democrats, I’d be coming to the support of the blogosphere, because as I say I’m not persuaded Kos and bloggers are the real targets here. And Brooks should be ashamed of himself for passing on smears without bothering to check facts. But then, he’s only a vegetable.

33 thoughts on “Smoke-Filled Backrooms of the Internets, Conclusion”