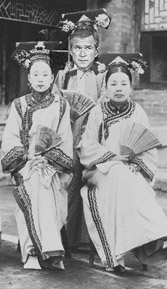 Apparently China laid down the law to Kim Jong Il:

North Korean leader Kim Jong Il expressed regret about his country’s nuclear test to a Chinese delegation and said Pyongyang would return to international nuclear talks if Washington backs off a campaign to financially isolate the country, a South Korean newspaper reported Friday.

Kim told the Chinese delegation that “he is sorry about the nuclear test,” the newspaper reported.

The delegation led by State Councilor Tang Jiaxuan met Kim on Thursday and returned to Beijing later that day _ ahead of U.S. Secretary of State Condoleezza Rice’s arrival in the Chinese capital Friday.

We should send China a thank-you card for pulling our ass out of the fire, I suppose. Now if Condi doesn’t blow it too badly, maybe North Korea’s Dear Leader will settle down for a spell.

Naturally, rightie bloggers are crediting our Dear Leader for the apology. This poor schmuck actually titles his blog post ” Cowboy Bush Forced Apology Out Of Kim Jong-Il, WITHOUT Bilateral Talks?”

No, dear, China forced an apology out of Kim Jong Il with bilateral talks. Bilateral talks between China and North Korea.

Please understand that it’s a relief to me that Bush is being a weenie and allowing China to take the lead in handling Kim Jung Il. I trust China more than I trust Bush not to do anything really stupid. But ultimately it’s not in China’s interest to depose Kim Jung Il or allow Korean reunification. So if we want the interests of the United States to be addressed, the United States has to be the one to bring them to the table.

But once again we see that Bush doesn’t sound so tough when the enemy might hit back. As Dan Froomkin noted yesterday, the cowboy is, um, gone.

Kim Jong Il is the only leader of a nuclear weapons state who might conceivably consider it in his interests to sell a nuclear bomb to Osama bin Laden.

So forget for a moment how we got here. Put aside partisan politics. Wouldn’t this be a good moment for the American president to draw a very distinct line in the sand?

Wouldn’t it be appropriate for him to make clear to the North Koreans that if they do any such thing, they will suffer cataclysmic consequences? Wouldn’t this be a good time for some of that famous cowboy talk?

Bush seemed appropriately stern, promising that North Korea would be “held to account” for any transfer of nuclear weapons, and would suffer “grave consequence[s].”

But then he seriously undermined his own rhetoric by likening those consequences to the sanctions recently imposed against North Korea — sanctions whose implementation, not to mention effectiveness, are very much in question.

… [C]ould it be that Bush knows he’s not prepared to do what needs to be done?

Stephanopoulos: “Last week, after their first test, you went into the White House and you said that any transfer of nuclear material by North Korea would be considered a grave threat to the security of the United States. I went back and checked, you’ve used that phrase once before in your presidency about Iraq. So, are you saying then if North Korea sold nukes to Iran or al Qaeda. . . . ”

Stephanopoulos: “What does that mean?”

Bush: “Well, at the time they find out, George, one of the things that’s important for these world leaders is to hear is, you know, we use means necessary to hold them to account.”

Stephanopoulos: “So if you got intelligence that they were about to have that kind of a transfer. . . . ”

Bush: “Well, if they get – if we get intelligence that they’re about to transfer a nuclear weapon, we would stop the transfer and we would deal with the ships that were taking the – or the airplane that was dealing with or taking the material to somebody.”

Stephanopoulos: “And if it happened, you’d retaliate.”

Stephanopoulos: “And that’s about as serious as it can get.”

Jeebus, what a weenie.

Just as a reminder of what a real leader sounds like, here is JFK’s address to the American people regarding the Cuban Missile Crisis. Snips:

Our policy has been one of patience and restraint, as befits a peaceful and powerful nation which leads a worldwide alliance. We have been determined not to be diverted from our central concerns by mere irritants and fanatics. But now further action is required, and it is under way; and these actions may only be the beginning. We will not prematurely or unnecessarily risk the costs of worldwide nuclear war in which even the fruits of victory would be ashes in our mouth; but neither will we shrink from that risk at any time it must be faced. …

… It shall be the policy of this Nation to regard any nuclear missile launched from Cuba against any nation in the Western Hemisphere as an attack by the Soviet Union on the United States, requiring a full retaliatory response upon the Soviet Union.

Bush has been downright wobbly in dealing with nasty foreign people lately. You might remember the G8 Summit dinner last July in which the President was caught by an open microphone —

â€œSee the irony is that what they need to do is get Syria to get Hezbollah to stop doing this (expletive) and itâ€™s over,â€ Bush told Blair as he chewed on a buttered roll.

He told Blair he felt like telling U.N. Secretary-General Kofi Annan, who visited the gathered leaders, to get on the phone with Syrian President Bashar Assad to â€œmake something happen.â€ He suggested Secretary of State Condoleezza Rice might visit the region soon.

So his “solution” is for somebody else to talk to Syria. He goes running to others to fix his problems. Laura Rozen reported at the time:

… [R]ather than hold direct talks between Washington and Damascus, the Bush administration was leaning on Saudi Arabia to negotiate with Syria, with the aim of trying to drive a wedge between Damascus and Tehran, both supporters of Hezbollah. Rice also met with Lebanese Parliament speaker Nabih Berri, widely understood to be an unofficial liaison with Hezbollah. In both cases, the Bush team preferred proxies to direct conversation.

This is just weird.

Update: Is Bush having his Fisher King moment?