I’ve been predicting the crackup of “movement” conservatism for, well, awhile. Today it’s obvious even to some pundits that The Great Disintegration has finally arrived. (Never fear; Cokie Roberts remains clueless; via Avedon.)

This is not to say that the Vast Right-Wing Conspiracy will go away soon, or that David Horowitz will ooze back under his rock-of-origin. The wingnuts still have a lot of power and can still do a lot of damage. Yet their days of near-absolute dominance of national politics are behind them. For good, I say.

The Achilles’ heel of the Republican “base” constructed by Karl Rove for the 2000 election and continued through 2006 was always that the strategy relied on a rock-hard minority propelled into majority status by organization and cash. …

… The best that can be done with a base of this size is to find ways to pump it up to 51 percent, which was Rove’s strategy â€” get one vote above 50 percent, call it a mandate, give your financiers tax breaks and tell the evangelical base how important it is.

The danger in this system is that even if you hold 70-plus percent of this base, you are still short of a majority, and if you emphasize too much your dedication to the values of the base, you will alienate moderates.

That happened on Nov. 7, and all the polls show moderates fled the GOP in droves and left the white evangelical base â€” loyal to the end â€” short of friends outside the South.

By pursuing rhetoric and policies that targeted the religious right, Bush and Rove turned off many others, certainly including the well-educated, who reacted to their anti-science opposition to stem-cell research and global warming.

One of the significant developments of the midterms was the “swing” of suburban, middle-class voters to the Dems. At New York Newsday, Lawrence Levy argues:

Suburbanites are not anti-change, just anti-extremism of any stripe – whether Democrats in the ’70s or Republicans in the ’90s. They’re not anti-government. Many people move here for more and better government services. And they’re not anti-tax. They’re willing to pay high taxes, to a point, if they feel they’re getting good value.

On Tuesday, the finicky, often ticket-splitting suburbs said that President George W. Bush and his party weren’t giving them their money’s worth – not in Iraq, not on ethics, not on the economy. These voters did so because, overall, the GOP again had become too stubbornly extreme and unaccountable.

Neither party owns the suburbs, Levy says. But Republican support had been sliding in the suburbs until 9/11, after which Republican exploitation of fear and “patriotism” caused suburbanites to swing right. But that’s so over.

McKay at the Seattle Times continues,

Some traditional Republican financiers found the current Republican White House and Congress shy on traditional values of low spending and small government, and withheld checks. New-style millionaires have appeared in the high-tech industries in particular, and many see Democrats as more friendly to science and higher education, vital for American competitiveness. Voters earning more than $100,000 still voted Republican by a 52-48 margin, but that is the smallest margin since at least 1988.

Republicans have also lost their edge among better-educated Americans; college grads were split 50-50 and those with advanced degrees voted 59-41 for the Democrats. The latter is the highest since at least 1986. There are plenty of advanced degrees teaching literature and sociology, of course, but more work for law firms, big business and high-tech employers. These folks vote and they also decide where business places its campaign funds. Forty-five percent of 2006 voters have a college degree or more.

If the GOP loses its traditional strength among high-income voters and among college graduates, it is in serious trouble, more trouble than a 100-percent vote from white evangelicals could reverse. 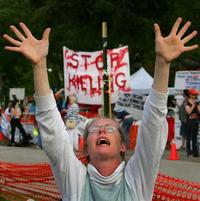 McKay thinks the turning point for many voters was Terri Schiavo. He (and I) think that most Americans watched the “pro-life” carnival outside Schiavo’s hospital with revulsion. As Levy says, middle-class suburbanites are, above all else, anti-extremism.

In today’s Boston Globe, Derrick Jackson writes about the influence of Hurricane Katrina on the midterms. Jackson looks at the impact of the storm on urban voters —

Ron Dellums rattled off why he thought America gave control of the House and the Senate to the Democrats. He said the reason most underplayed by the media was Hurricane Katrina.

“This election was about scandal, it was about checks and balances, about Iraq,” Dellums said. “Also about Katrina. Because at a time that this country was saying that we’re in a foreign country for the purposes of security and safety, when it hit home, our response was inept, inadequate, insincere and lacking in compassion. Here’s the wealthiest nation in the world — gave a Third World response to a major catastrophe. In my opinion, Katrina was a metaphor for everything wrong in urban America. What Katrina did was expose the stark reality of the vulnerability of urban life . . . the winds of Katrina blew through the television all of the pain of urban life.”

Speaking Sunday before the Trotter Group of African-American newspaper columnists at its annual conference at Stanford University, Dellums, 71, the former longtime congressman and mayor-elect of Oakland, said every city is a potential Katrina. Beyond the much-examined issues of preparedness and infrastructure, Dellums said Katrina gave Americans a chance to see how poverty has so many dimensions: in healthcare, education, justice, and the environment. “Katrina opens the door on the domestic front so that we have to address these issues.”

Suburbanites watched also, and even those unconcerned about poverty were disturbed by what they saw. Government spending out of control, yet corpses are left to rot on the streets of a major city? Remember what Levy wrote — “They’re willing to pay high taxes, to a point, if they feel they’re getting good value.” Pretty obvious we’re not getting good value.

If you want to know why Republicans were thumped in the midterms, read this interview of right-wing strategist Richard Viguerie by Mary Jacobs, posted on Salon two years ago. Fresh from the 2004 general election, Viguerie assured Jacobs that the right-wing revolution was about to start.

The time is now to take a very different approach to governing that this town hasn’t seen since the 1930s, when Democrats took control of the White House in the 1932 election [with FDR]. Since then, the big-government establishment has driven the political agenda. They started driving it in the early 1930s, and they pretty much drove the agenda through 1994 [when Republicans seized control of both the House and the Senate for the first time in 40 years].

Then things kind of came to a halt. It was difficult for the conservatives to implement a lot of their agenda. [With Bill Clinton’s election in 1992] they didn’t have the White House. The president could veto our legislation, as he did. And then, we had slim [conservative] majorities to none in the Senate. Now we have a comfortable margin. And George Bush has a mandate. It’s humorous and amusing to hear people in the media and liberals in the country — and even some Republicans, though not many, just one as a matter of fact — who are saying we’re not going to move on [our conservative agenda].

FYI, the “one” was Arlen Specter. Specter had just warned Bush not to nominate anti-abortion Supreme Court justices.

And you’ll notice that his staff has been backtracking all day on it. You can’t turn on the television right now without hearing someone talking about the Republicans, saying Bush has an obligation to unify the country. That’s code for “abandon your conservative allies and move to the left.” That’s what they mean by unity: Stop trying to promote a conservative agenda. That’s just what the country needs, one more politician to break his promise hours after he was reelected.

Satisfied that Specter (whom Viguerie wanted to block from the Senate Judiciary Committee chairmanship) was being whipped into line, Specter addressed the question, “Is there any future at all for moderate Republicans in the GOP?”

Absolutely. It’s just that the election was fought not on moderate Republican issues but on conservative issues. It was conservatives who made the phone calls and pounded the pavement and turned out the big vote for Bush and the Republicans in Congress. But yeah, sure, unlike [with] the Democrats, there’s a place for moderates in the Republican Party. The Democrats do not tolerate dissent in their party. You have zero chance of having a successful career in national Democratic politics if you’re not pro-abortion and [don’t] pass the homosexual litmus test. Not so in the Republican Party. Not only are you welcome, but we put you on TV. We give you platforms to speak out on.

Except that if, like Specter, you say the wrong thing, expect punishment.

If they believe in a pro-abortion position, well, we’re not going to accommodate it. Absolutely not. But we do welcome them in the party, and they have made some welcome contributions. To the extent they support lower taxes, a fiscally sound government and a strong national defense — absolutely we welcome them.

In other words, moderates are welcome into the party, as long as they agree with the extremists. OK. But there aren’t enough extremists in America to win elections. To win elections, you have to persuade (or fool) a substantial number of moderates to vote for you.

Two years ago, victorious radicals in the GOP ignored calls to “unify” the country and pushed ahead with their extremist agenda. Today some of those same righties are warning Democrats that they’d better be careful to cater to conservatives. One of the clued pundits, Harold Meyerson, says the Right is in denial.

Republicans may have lost, conservatives argue, but only because they misplaced their ideology. “[T]hey were punished not for pursuing but for forgetting conservatism,” George F. Will, conservatism’s most trenchant champion, wrote on this page last week. …

… Holding conservatism blameless for last week’s Republican debacle may stiffen conservative spines, but the very idea is the product of mushy conservative brains unwilling to acknowledge the obvious: that conservatism has never been more ascendant than during George Bush’s presidency; that the Republican Party over the past six years moved well to the right of the American people on social, economic and foreign policy; and that on Nov. 7 the American people chose a more pragmatic course. …

… [W]hat has defined conservatism in the popular mind over the past couple of years has been its willingness to enlist government to block stem cell research, stop the teaching of evolution and supersede the duties of Terri Schiavo’s husband.

This may be a conservatism that makes libertarians cringe, but it is the conservatism that dominates the Republican Party we have. Republicans generally and conservatives particularly have profited mightily from the rise and politicization of fundamentalism over the past few decades. The decimation of Republican moderates from the Northeast and Midwest in last week’s elections came at the hands of centrist and independent voters who’d had it with the Southernized religious conservatism of the Republicans’ base — and with its moderate Republican enablers.

Finally, conservatives argue that the newly elected Democrats are really conservatives, too — proof that the ideology is in no need of a tuneup. It’s true that some of the Democrats take conservative positions on guns and abortion. But it’s also true that virtually all the new Democrats look askance at free trade, want to raise the minimum wage and back a bigger role for government in making health care more affordable.

At a time when corporations abandon their employee benefits, globalization depresses wages, and individuals are compelled to shoulder more and more risk, the last thing Americans need is a government that tells them — as it told their countrymen in New Orleans last year — they’re on their own.

Righties have been spouting anti-government, drown-it-in-the-bathtub rhetoric for decades. Now they’ve had nearly six years to show Americans what they can do when they get complete control. And America just said no.