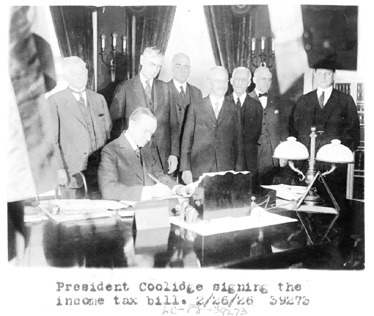 President John F. Kennedy was an astute proponent of tax cuts and the proposition that lower tax rates produce economic growth. Calvin Coolidge and Ronald Reagan also understood the power of lower tax rates and managed to put through cuts that grew the U.S. economy like Kansas corn. Sadly, we just don’t seem able to keep that lesson learned.

One of the triumphs of the Coolidge Administration was the passage of his tax program in 1926; the photograph shows him signing it. The Coolidge program “repealed the gift tax, halved estate taxes, substantially cut surtaxes on great wealth, and reduced income taxes for all,” it says here. The photo is dated February 26, 1926. Assuming that is accurate, We Now Know that the Stock Market Crash of 1929 was only slightly over three years and seven months away. The Great Depression followed soon after.

Calvin Coolidge’s tax program is the bad example that won’t die. I remember just after George W. Bush was “elected” in 2000 some eager young folk of the Right wrote giddy tributes to tax cuts that cited the Wisdom of Silent Cal. But mention of Coolidge vanished rather quickly, and I assume there was some frantic back-channel communication explaining that, um, maybe Calvin Coolidge’s economic policies are not something we want to emphasize. I guess Lawnorder Fred didn’t get the memo.

I’m not saying that the Coolidge tax cuts were the direct cause of the Great Depression. But that decade wasn’t called the “Roaring Twenties” for nothin’. Coolidge paid for his tax cuts by being a scrooge on domestic spending, including vetoes of flood control and agricultural programs for which many folks had dire need. What happened next is right out of the history textbooks [emphasis added]:

If the Coolidge tax cuts of 1926 “grew the U.S. economy like Kansas corn,” as Fred suggests, one wonders why sales of new autos and household consumer goods stagnated after 1926.

The stock market did indeed go up a lot during the Coolidge Administration, but much of that was from overheated speculation. It was a bubble, in other words. And when the bubble burst, it burst big.

Fred writes glowingly of the soaring tax revenues and the shrinking budget deficit given us by Dear Leader’s glorious tax cuts. If you want to see what a crock that is, just look at this chart via Ezra Klein.

The other myth cited by Fred Thompson is, of course, the myth of the Reagan tax cuts. The fact is that in 1982, when he realized his tax cuts weren’t growing revenue as promised, Reagan raised some taxes considerably to make up for the shortfall. He also raised taxes in 1983, 1984, 1985, 1986, and 1987. Bruce Bartlett patiently explained this in a National Review article written in 2003. In this article the hapless Bartlett wrote that prudent management of the economy required some tax increases. Like anyone on the Right would listen to that.

A few days ago Bartlett wrote an op ed in the New York Times complaining that most of the people pushing “supply-side economics” these days have no clue what it actually is.

AS one who was present at the creation of ”supply-side economics” back in the 1970s, I think it is long past time that the phrase be put to rest. It did its job, creating a new consensus among economists on how to look at the national economy. But today it has become a frequently misleading and meaningless buzzword that gets in the way of good economic policy.

Today, supply-side economics has become associated with an obsession for cutting taxes under any and all circumstances. No longer do its advocates in Congress and elsewhere confine themselves to cutting marginal tax rates — the tax on each additional dollar earned — as the original supply-siders did. Rather, they support even the most gimmicky, economically dubious tax cuts with the same intensity.

The original supply-siders suggested that some tax cuts, under very special circumstances, might actually raise federal revenues. For example, cutting the capital gains tax rate might induce an unlocking effect that would cause more gains to be realized, thus causing more taxes to be paid on such gains even at a lower rate.

Those of you who want a meatier discussion of this issue can find it at Economist’s View (Bruce Bartlett joined in). My only quibble with what he wrote is that, as I remember, the Reagan-era supply siders were not the sober and cautious crew that Bartlett describes.

Naturally, a number of rightie bloggers are linking to the Fred Thompson article with warm approval. I guess anyone dumb enough to think Larry Kudlow is an economist is dumb enough to admire Calvin Coolidge’s tax policy. Sadly, we just don’t seem able to keep that lesson learned.

Update: For an explanation of why JFK was not a supply sider, see David Greenberg, “Tax Cuts in Camelot?” (Slate, January 16, 2004). For sharp commentary on Fred Thompson, see Taylor Marsh, “Desperate After Dubya?”