Remember that big drop in violence in Iraq that’s supposed to have happened because of the “surge”? Nancy A. Youssef of McClatchy Newspapers writes that the Bush Administration no longer counts car bombings as “violence.”

U.S. officials who say there has been a dramatic drop in sectarian violence in Iraq since President Bush began sending more American troops into Baghdad aren’t counting one of the main killers of Iraqi civilians.

Car bombs and other explosive devices have killed thousands of Iraqis in the past three years, but the administration doesn’t include them in the casualty counts it has been citing as evidence that the surge of additional U.S. forces is beginning to defuse tensions between Shiite and Sunni Muslims.

President Bush explained why in a television interview on Tuesday. “If the standard of success is no car bombings or suicide bombings, we have just handed those who commit suicide bombings a huge victory,” he told TV interviewer Charlie Rose.

Youssef explains that there has been a big drop in the number of executions, most of which were being carried out by Shiite militias. “Much of the decline occurred before the security plan began on Feb. 15, and since then radical Shiite cleric Muqtada al-Sadr has ordered his Mahdi Army militia to stand down.” In the same period, however, the number of suicide car bombings (which U.S. officials attribute to al Qaeda) has risen considerably.

Sure enough, Joe Lieberman has an op ed in today’s Washington Post about the wonderful progress being made in Iraq. Then he says, “The suicide bombings we see now in Iraq are an attempt to reverse these gains.” We got ’em on the ropes, folks. You heard it from Holy Joe himself.

Since the Bush administration doesn’t actually have any good news on Iraq, they are just making it up. It confirms your worst suspicions. They haven’t been counting victims of car bombings when they say that violence is down in Iraq! Bush administration spokesmen and officials are just saying that fewer bodies are found in the streets, victims of death squads. But the number of victims of car bombing has actually increased in this period.

Meanwhile, the Iraqi government is withholding statistics on Iraqi casualties from the United Nations. 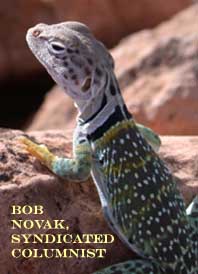 In today’s Washington Post, the Reptile writes that the Bush Administration has barricaded itself from, well, just about everybody. He describes Bush’s delusional defense of the hapless Alberto Gonzales, then adds,

Vice President Cheney’s personal criticism Tuesday of Senate Majority Leader Harry Reid in a rare statement just off the Senate floor suggested that defense of Gonzales is not an isolated act of defiance. Bush, never entranced with life in Washington, detests dealing with a Democratic Congress. Reflecting annoyance and fatigue, he is unwilling to withstand incessant attacks from the likes of Reid and is ready to fight it out for the over 20 months left in his term. Retaining Gonzales means Bush has slipped behind the barricades.

The choice for righties is whether to stand aside or wall themselves in with the besieged Bushies. Today a number of them are lined up on the castle parapet, hurling mud and abuse at the armies beyond the moat (that’s us). For example, Michelle Malkin has “produced” an infantile video — well, I’ll let Bob Geiger describe it:

Malkin, who, of course, has never served in the military, proudly posted on her personal web site, Hot Air and YouTube, today a video she stars in showing her in a faux cheerleader costume — the cheerleader image just forever went from wholesome to skank in my mind — and bellowing out “The Defeatocrats’ Cheer.”

She does the old “gimme an ‘L,’ gimme an ‘O'” routine until she spells out “loser” complete with the clucking of a chicken after each silly chant and showing unflattering pictures of Kerry, Murtha, Ted Kennedy, Harry Reid and Nancy Pelosi with each letter of the word. Malkin even waves little white flags at the end to signify surrender from the Democrats.

In other words, they’re out of even nonsensical arguments and have resorted to flinging feces. 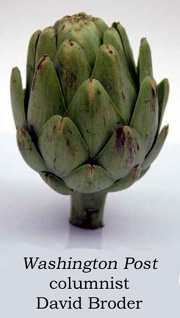 Today everybody‘s linking to this David Broder column, in which the Artichoke says Senator Harry Reid is the Democrats’ Alberto Gonzales. “The Democrats deserve better, and the country needs more, than Harry Reid has offered as Senate majority leader.”

Years ago, David Broder probably was an excellent columnist. I’ve never followed his column closely, but Josh Marshall says Broder peaked in the 1960s and 1970s (as did Rich Little). He’s well into his 70s now, which doesn’t necessarily translate into dementia. Josh writes

I really don’t know whether I find it more painful or amusing to watch David Broder’s quickening decline. But I’m going to go with amusing. Because clearly there’s some deep streak of evil within me that gets a kick out of watching one man struggle so desperately for relevance and even coherence.

I think I feel more embarrassed for Broder than anything else. Broder won a Pulitzer Prize for distinguished commentary in 1973, which was the same year the Washington Post won a Pulitzer for its Watergate investigations. But that was a long time ago.

Here in the present, Mark Murray reports for MSNBC that Americans are siding with the Democrats against Bush.

As the Democrat-controlled Congress and the White House clash over an Iraq spending bill, with President Bush vowing to veto it because it contains withdrawal deadlines, the latest NBC News/Wall Street Journal poll finds that a solid majority of Americans side with the Democrats.

In addition, a nearly equal number believe that victory in Iraq isn’t possible, and about only one in eight think the war has improved in the three months since Bush called for a troop increase there.

“They don’t see the surge working,” says Democratic pollster Peter D. Hart, who conducted the survey with Republican pollster Neil Newhouse. Instead, they are saying “we need to get out.”

The timing of this news couldn’t be better; today the Senate is expected to vote on the â€œemergencyâ€ supplement appropriations bill that the House passed last night. Let it pass, let The Creature veto it, and force Republican politicians to choose whether to be on this side of the barricade with the majority of the American people, or with the dwindling, desperate holdouts on Bush’s side.