Amanda at Think Progress posts more about the problem of responding to disasters, discussed in the last post:

This morning on CNN, Gov. Kathleen Sebelius (D) said that the state is missing vital National Guard equipment because of the wars in Iraq and Afghanistan. Usually the state has approximately 70-80 percent of its equipment at any given time, but it currently has just 40-50 percent. She added that these shortages â€œwill just make it [recovery] that much slower.â€ …

… According to a recent report by a congressional commission, nearly â€œ90 percent of Army National Guard units in the United States are rated â€˜not ready,â€ largely â€œas a result of shortfalls in billions of dollarsâ€™ worth of equipment.â€ A January Government Accountability Office analysis found that the Pentagon â€œdoes not adequately track National Guard equipment needs for domestic missionsâ€ and as a consequence, â€œstate National Guards may be hampered in their ability to plan for responding to large-scale domestic events.â€

The same problem was an issue after Hurricane Katrina, you might remember, although plenty of troops and equipment from other states were on the Gulf Coast in a few days. Our military has become more depleted and stretched since, however.

Floods are spreading throughout large parts of the Great Plains — Nebraska, Oklahoma, Texas, Kansas and South Dakota in particular. Communities damaged by disaster not only need rescuing; they need money to rebuild. There’s some folks on the Gulf Coast who might have something to say about that. This weekend President Bush made noises about the “pioneer spirit” of Midwesterners. That sounds ominous to me. Instead of providing trailers, maybe this time FEMA will drop leaflets all over the Plains that explain how to build a sod house. 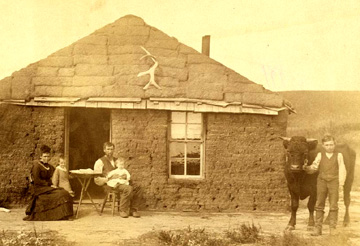 Based on Memeorandum, at the moment rightie bloggers are still more hysterical about the exploding backpack in Las Vegas than they are about our nation’s continuing inability to respond to disasters as well as we should. The few righties who have commented on the problem in Kansas have brushed it off as the whining of another woman Democratic governor.

2 thoughts on “A Little Damp”