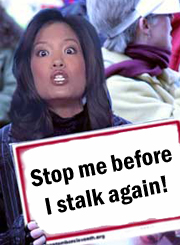 After a target of one of Michelle Malkin’s hate campaigns committed suicide you’d think Little Lulu would show a little restraint.

But no; Malkin and others on the Right have formed a full-scale howling mob to attack the family of 12-year-old Graeme Frost. Righties have been calling the Frosts, harassing them with personal questions. Malkin personally drove by the Frosts’ home so that she could describe it to her readers, and she went to a commercial property they own and interviewed one of the tenants.

Why? Because Graeme appeared in a commercial in support of the S-CHIP program.

The right-wing immediately condemned Democrats for daring to put a human face on the SCHIP program at a time when Bush was proposing a â€œdiminishment of the number of children covered.â€ Rep. John Boehner (R-OH) â€” who has posed with children to advance his own political agenda â€” claimed Graeme was being used â€œas a human shield.â€

Conservatives have more recently turned their targets on young Graeme Frost himself. A poster at the Free Republic propagated information alleging that Frost was actually a rich kid being pampered by the government. Among other bits of information, the post by the Freeper â€œicwhatudoâ€ asserts that Graeme and his sister Gemma attend wealthy schools that cost â€œnearly $40,000 per year for tuitionâ€ and live in a well-off home.

The smear attack against Graeme has taken firm hold in the right-wing blogosphere. The National Review, Michelle Malkin, Wizbang, Powerline, and the Weekly Standard blog have all launched assaults on the Frost family. The story is slowly working its way into traditional media outlets as well.

Here are the facts that the right-wing distorted in order to attack young Graeme:

1) Graeme has a scholarship to a private school. The school costs $15K a year, but the family only pays $500 a year.

2) His sister Gemma attends another private school to help her with the brain injuries that occurred due to her accident. The school costs $23,000 a year, but the state pays the entire cost.

3) They bought their â€œlavish houseâ€ sixteen years ago for $55,000 at a time when the neighborhood was less than safe.

5) The state of Maryland has found them eligible to participate in the CHIP program.

Desperate to defend Bushâ€™s decision to cut off millions of children from health care, the right wing has stooped to launching baseless and uninformed attacks against a 12 year old child and his family.

Right wing bloggers have been harassing the Frosts, calling their home numerous times to get information about their private lives. Compassionate conservatism indeed.

To the list of shameless liars attacking the Frost family I would like to add spree at Wake Up America, Jimmie at The Sundries Shack, and Don Surber. I only wish there was some way these tools could get a taste of their own medicine.

Maybe she can get some of her flunkies at Hot Air to sit with binoculars and see what they have for dinner. Better not be government cheese, or the SHIT is going to hit the fan.

The Malkin wing of the current Republican party makes me fucking sick. …

What Michelle has done here is creepy and weird and wrong.

Her defense for her behavior, and for that of Greater Wingnuttia:

Asking questions and subjecting political anecdotes to scrutiny are what journalists should be doing.

But all this shit started with obviously stupid and dishonest “questions” that weren’t questions at all, but vile innuendo. The reason actual journalists didn’t ask these “questions” is that there was never any reason to ask them except to engage in this innuendo. “Mr. & Ms. Frost, you appear to be spending $40,000 a year on your $45,000 income in order to send your kids to a swanky private school. Could you explain to our readers how you are perpetrating tax fraud and lying to the government to qualify for financial benefits?” A reporter who asked a “question” like that ought to expect a punch in the snout, frankly.

Nothing in this family’s story is remotely implausible, and anyone who pretends otherwise is making up crap because they don’t like a healthcare program that benefits the middle class. Period.

Malkin and the mouth breathers who follow her think they can force their way on America by mob rule and intimidation. Let’s prove ’em wrong. Support S-CHIP.

This is so loathesome I am literally sick to my stomach. These kids were hurt in a car accident. Their parents could not afford health insurance — and sure as hell couldn’t get it now with a severely handicapped daughter. And these shrieking wingnut jackasses are harassing their family for publicly supporting the program that allowed the kids to get health care. A program, by the way, which a large number of these Republicans support as well.

They went after Michael J. Fox. They went after a wounded Iraq war veteran. Now they are going after handicapped kids. There is obviously no limit to how low these people will go.

They’d better pray that they stay rich and healthy and live forever because if there is a hell these people are going to be on the express train to the 9th circle the minute they shuffle off their useless mortal coils.