I clicked on the link, expecting to see photos of joyous Iraqis littering the streets of Baghdad with flowers and confetti. Instead, this: 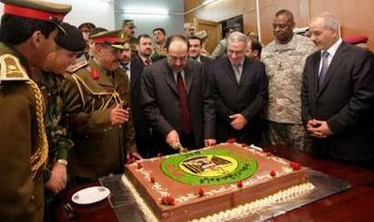 This is joy? Some suits and uniforms standing around an ugly-ass cake? I’ve seen giddier office parties.

Gateway Pundit reproduces some news stories that appear to be from Iraqi media — I see one says “Story by 3rd Infantry Division Public Affairs” — although they are in English. So it’s not clear to me exactly where these news stories come from. But of course, we can accept them as gospel because, you know, they’re on our side. The stories describe the wonderful success of the “surge.” And the blogger comments:

It goes without saying… There would be no party, parade or cake today if the Democrats would have had their way.

Earlier on the same day as the cake photo op, some Iraqi citizens directly experienced the joy of the surge.

It was the latest in a series of reports about errant strikes that have stoked tensions between the citizens security groups in central and northern Iraq, and their American backers.

Sheik Mohammed Ghuriari, who heads the so-called Awakening Councils that supply fighters to protect neighborhoods in the north of Babil province, said it was the third U.S.-led strike on their checkpoints in fewer than two months. He claimed 19 people had been killed and 14 injured.

â€œThe U.S. forces should learn from their mistakes,â€ Ghuriari said in a telephone interview. â€œSuch repeated attacks will make the Awakening Councils review their stance in the agreements they signed with the U.S. forces.â€

The U.S. military has acknowledged one mistake so far, a Feb. 2 air strike that killed nine people including at least three Awakening members and a child. The soldiers thought they were targeting insurgents readying a roadside bomb in a rural area 25 miles southeast of Baghdad, officers said at the time.

OK, so maybe that doesn’t count because the accidents took place outside of Baghdad. Let’s see what else is going on …

BAGHDAD — Iraq’s prime minister declared “victory in Baghdad” yesterday, claiming U.S. and Iraqi troops have chased al-Qaida in Iraq out of the capital in the year since a security crackdown began, and vowing to pursue insurgents who have fled northward.

Underscoring the rising violence in northern Iraq, a double suicide bombing targeted Shiite worshippers as they left weekly prayer services in the city of Tal Afar, killing at least four people and wounding 17. Police said guards at the Juwad mosque prevented a worse casualty toll by opening fire on the two attackers before they could reach the bulk of worshippers emerging from the building.

In remarks broadcast on state television, Prime Minister Nouri al-Maliki thanked the U.S. military and its allies for “standing with us in defeating terrorism.”

Wow, Baghdad must be safe, if Nouri al-Maliki says so. After all, as Haifa Zangana writes at The Guardian —

Iraqis suffering from the lack of basic services continue to call the Maliki government; “the government of the sectarian militias” with the highest record of corruption permeating in every aspect of its body. Democracy, transparency and human rights are terms often used as jokes.

As for the celebrated US/allied tribal Sunni militia called al-Sahwa (the awakening), the last few weeks has proved that it is increasingly becoming the monster about to devour its creator. Sheik Ali Hathem al Duleimy, the head of al Sahwa, many of whose members are paid by the occupiers, went on Iraqi TV and said that his militia would no longer allow the US or Iraqi government to interfere with its work.

Do read all of Haifa Zangana’s post, as she tells more about the “accidents” befalling Iraqi civilians that we’re not hearing much about here, for some reason. (Can’t imagine why.) See also Steve Lannen, McClatchy Newspapers —

Violence is increasing in Iraq, raising questions about whether the security improvements credited to the increase in U.S. troops may be short-lived.

Car bombs in Baghdad on Monday killed at least 11 people and injured a prominent leader of one of the country’s most influential American-allied tribal militias.

The Ministry of Electricity announced that power to much of the nation, already anemic, is likely to lag in coming days because insurgents had blown up transmission facilities and natural gas pipelines that fuel generators.

CBS News confirmed that two of its journalists are missing in Basra, in Iraq’s south.

Etc., etc. The suits might have their cake, but can they eat it, too?