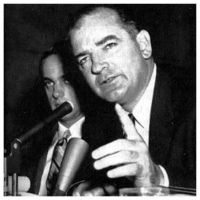 This is too funny. At the hilariously misnamed Accuracy In Media (AIM), Cliff Kincaid is on a tear about Barack Obama’s connections to international Communism.

In “Obamaâ€™s Communist Mentor,” Kincaid charges that Obama was imprinted with the cause of Communism by a “mentor,” Frank Marshall Davis. Back in the early 1950s, Davis (along with about half of the population of North America) was identified as a Communist by the House Un-American Activities Committee. Now it comes to light that this same Frank Marshall Davis was a friend of the family who gave young Barack fatherly advice before he went off to college. Hence, Obama is a Communist dupe.

Somehow, I don’t think Red-baiting is going to work on the young folks.

Yet, it gets crazier. Lisa Schiffren writes at The Corner (hat tip Too Sense):

… Obama and I are roughly the same age. I grew up in liberal circles in New York City â€” a place to which people who wished to rebel against their upbringings had gravitated for generations. And yet, all of my mixed race, black/white classmates throughout my youth, some of whom I am still in contact with, were the product of very culturally specific unions. They were always the offspring of a white mother, (in my circles, she was usually Jewish, but elsewhere not necessarily) and usually a highly educated black father. And how had these two come together at a time when it was neither natural nor easy for such relationships to flourish? Always through politics. No, not the young Republicans. Usually the Communist Youth League. Or maybe a different arm of the CPUSA. But, for a white woman to marry a black man in 1958, or 60, there was almost inevitably a connection to explicit Communist politics. (During the Clinton Administration we were all introduced to then U. of Pennsylvania Professor Lani Guinier â€” also a half black/half Jewish, red diaper baby.)…

… Political correctness was invented precisely to prevent the mainstream liberal media from persuing the questions which might arise about how Senator Obama’s mother, from Kansas, came to marry an African graduate student. Love? Sure, why not? But what else was going on around them that made it feasible? Before readers level cheap accusations of racism â€” let’s recall that the very question of interracial marriage only became a big issue later in the 1960s. The notion of a large group of mixed race Americans became an issue during and after the Vietnam War. Even the civil-rights movement kept this culturally explosive matter at arm’s distance.

It was, of course, an explicit tactic of the Communist party to stir up discontent among American blacks, with an eye toward using them as the leading edge of the revolution. To be sure, there was much to be discontented about, for black Americans, prior to the civil-rights revolution. To their credit, of course, most black Americans didn’t buy the commie line â€” and showed more faith in the possibilities of democratic change than in radical politics, and the results on display in Moscow.

Time for some investigative journalism about the Obama family’s background, now that his chances of being president have increased so much.

In other words, race mixing is subversive. Lisa — racist, much? See also the good Roger Ailes (’tis a hoot).

BTW, those Gen-Xers who think the ruination of American politics came about at the hands of Baby Boomers — read up on the late 1940s and early 1950s, folks. That’s when it went crazy, IMO. The Flower Children were just reacting to the insanity.

And for those of you who enjoy looking back on the Good Old Days, here’s an oldie but goodie — highlights of the Army-McCarthy Hearings from That Wonderful Year, 1954.