It doesn’t surprise me that a truther pulled a gun and started shooting outside the Pentagon yesterday (let us be grateful no one was killed). It also doesn’t surprise me that now rightie bloggers have identified the shooter as a “Leftist.” Because, you know, even though the Right celebrates rage, violent rhetoric and guns, only lefties ever actually kill anybody. Right.

At Patterico’s, one commenter gets the Sanity Award:

Once again, what the wingnuts don’t get is that political ideology is circular, not linear. 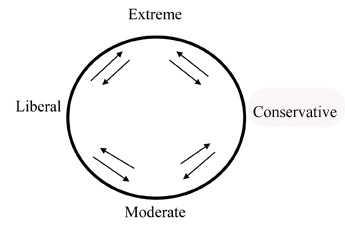 Taken to extremes, the unhinged and violent of whatever political persuasion end up at the same point on the circle. And the absolute north and south poles of the circle are neither Left nor Right. The die-hard truthers have been hovering around the north pole for quite a while.

That said, is David Brooks right to call the Tea Partiers “Wal-Mart Hippies“?

To start with, the Tea Partiers have adopted the tactics of the New Left. They go in for street theater, mass rallies, marches and extreme statements that are designed to shock polite society out of its stupor. This mimicry is no accident. Dick Armey, one of the spokesmen for the Tea Party movement, recently praised the methods of Saul Alinsky, the leading tactician of the New Left.

If the Right wants to copy the tactics that helped to marginalize progressivism for 40 years, who am I to argue?

The parallels are not perfect. The New Left, for the most part, organized to address legitimate issues such as civil rights and ending the war in Vietnam. The Tea Partiers are organizing around fantasies about tax increases and gun grabbing.

Also, when you’ve got people like Dick Armey speaking for you, you just lost the Pure Grassroots Anti-establishment Power to the People Award.

And isn’t it odd the way Saul Alinsky, of all people, has suddenly become a fixation of the rightie hive mind? Back in the day I sorta kinda knew who Alinsky was, but that was about it. From what I know of him, he was more of an organizer than an anarchist. According to Wikipedia,

Alinsky described his plans in 1972 to begin to organize the White Middle Class across America, and the necessity of that project. He believed that what President Richard Nixon and Vice-President Spiro Agnew called “The Silent Majority” was living in frustration and despair, worried about their future, and ripe for a turn to radical social change, to become politically-active citizens. He feared the Middle Class could be driven to a right-wing viewpoint, “making them ripe for the plucking by some guy on horseback promising a return to the vanished verities of yesterday.” His stated motive: “I love this goddamn country, and we’re going to take it back.”

Wow — “some guy on horseback promising a return to the vanished verities of yesterday.” He foresaw the rise of Reagan.

Update: It appears the shooter was a devotee of libertarians’ favorite economist, Ludwig Von Mises. If so, then whatever the shooter was, he was no “leftist.”

19 thoughts on “Teh Crazy, Left and Right”