The wingnuts are making an issue of the fact that a cleanup crew was brought in by BP to prepare the scene for President Obama’s visit to Grand Isle, Louisiana, yesterday. The Jammie Wearing Fool (I don’t know about the jammies, but … ) wrote

Maybe the alternate photo caption should read something like “I can see the end of my presidency from here.” Well, we all figured this would be a carefully choreographed photo op for the current occupant of the White House, but little did we know having their boot firmly on the neck of BP meant the folks at BP were obliged to send in some stooges for the visuals.

What I suspect really happened: Realizing that there would be tons of cameras and national attention drawn to the beeches of Grand Isle, Louisiana, BP headed off further PR disaster by busing in workers to clean up the beaches. In other words, the clean beaches were more a benefit to BP than anyone else.

But this news also brought to mind some other great photo op stories from recent years. For example, remember the firefighters who volunteered to help clean up New Orleans and found themselves being used as props for the Shrub? And what about the tool belt? I remember you guys got a real kick out of that one.

And then there was the Jimmy Breslin column from March 2004 in which the Unparalleled Mr. Breslin wrote about the large crew of Nassau County, New York, park workers that had to be pulled together to build a walkway for the President. Bush was going to attend a groundbreaking ceremony of a 9/11 memorial in Long Island, after which he was to walk across the park to a restaurant. But the President’s feet were not to touch the ground, Nassau County was told.

The Grand Isle crew was paid by BP, notice, not taxpayers. When Bush went to Long Island, the taxpayers paid. It’s possible the White House reimbursed Nassau County, but I’d be surprised if they did.

And then there was the Great Chinese Box incident, in which boxes stamped “Made in USA” and used as a backdrop for a Bush speech were found to have come from China. Good times.

And then there was the time that Bush flew to Jackson Square to give his post-Katrina speech of fake plans he never intended to implement, but which sounded good at the time. The White House, or somebody, brought in big generators to bring lights back on, which was the first electricity people had enjoyed for days. The the President left, and so did the electricity. 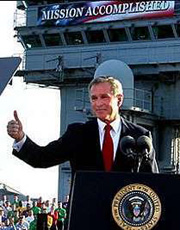 And who can forget …

Seriously, whenever I see a rightie get outraged about something Obama did that Bush did a lot worse, I wonder if they were all in comas for the eight years Bush was president. But no; they were just watching faux news.

Speaking of Teh Stupid — and unrelated to photo ops — some organization with the email address [email protected] has presumed to put me on its email list. Today’s email started this way:

Obama will use Memorial weekend as a gad-fly schmoozing with his homies in the Chicago hood, maybe even barbeque some weenies. …

Racist, much? Then later, it says,

The last time the Obama family has been home (and I don’t mean Kenya) was – in February of 2009. But now they will make the trip over Memorial Day weekend of all times! But it doesn’t stop there, an official trip of this caliber means the tax payers are shelling out of the kazoo for his bump and grind in the hood. …

Do we want to talk about presidents on vacation, Mr. Party? Seriously? Well, all right, then — this is picked up from an old post —

George W. Bush took more vacations than any other President in U.S. history.

That’s 487 days at Camp David and 77 trips to Crawford, Texas, where he spent all or part of 490 days. I calculate that to be about two years and eight months.

I don’t know what the travel time is from the White House to Camp David — I assume just a few minutes — but I figure Crawford must be at least three hours one way by air, and I assume there’s no Crawford International Airport, so there’s motorcade time to figure in, also. Assuming a 6 hour two-way trip, times 77 trips, equals 462 hours, or more than 19 days days spent just flying back and forth to Crawford.

Bush was in Crawford when he blew off the memo “Bin Laden determined to attack inside the U.S.” as being too trivial for his attention. As I remember it, he was in Crawford during the great electricity blackout of 2003, and it was several hours before he addressed it. He was in Crawford while two wars were going on in the Mideast.

And need I say … Hurricane Katrina?

For a collection of outraged snark at the Endless Vacation that was the Bush Administration, see Source Watch. I think the only reason there wasn’t more outrage is that Bush was such a bad POTUS, most of the time it didn’t matter whether he was on vacation or not.

Even when he wasn’t officially on vacation, Bush wasn’t famous for staying put in the White House. Especially in his first term, when the War on Terror was still new and sparkly, as I remember he spent about half of his not-vacation time traveling to Republican Party fundraisers. The pattern was to schedule some “official” event like a ribbon-cutting or a speech in a particular city, where by some coincidence there happened to be a GOP fund-raider going on that very evening, so he could take Air Force One on Republican Party business without reimbursing taxpayers. (See, for example, “Taxpayer Mugging for Political Fundraising.”)

How could anybody who was not sound asleep 24/7 for the entire eight years Bush was President not know this? Really, this goes beyond Teh Stupid.