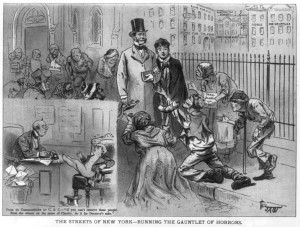 [The child in the lower left-hand corner is saying to an official, “If you don’t remove these people from the streets on the score of Charity, do it for Decency’s sake.”]

Thomas Edsall writes that Mitt Romney is running against entitlements.

Mitt Romney wants to stigmatize most â€œsafety netâ€ spending â€“ the array of social insurance programs from Medicare to food stamps to unemployment compensation to free school lunches â€” as a form of welfare that is â€œcultivating government dependence.â€

Of course, Republicans have been running against “welfare” forever. It’s been a particularly effective strategy for them since the 1960s, when they began to paint “welfare” as a transfer of money from middle-class whites to impoverished blacks. At the time, the white middle class was enjoying the fruits of almost four decades of the New Deal; the economy was sweet, and upward mobility (for them) a given.

So, overlooking the way government programs had improved the standard of living of a generation of whites, whites told themselves that those people were moochers who didn’t work hard enough. And since then the white middle class has more or less stood aside and allowed the malefactors of great wealth to dismantle the government programs that had made the white middle-class lifestyle of the 1960s possible.

The question is, how long will this scam continue to work?

Polls conducted since 1972 by the General Social Survey show that by margins of two to one, voters consistently say too little is spent on the poor, on education, on health care, on drug treatment â€” the list is long.

The 2-to-1 level of support found for spending on the poor for health care and other social services disappears when voters are asked specifically about welfare, according to the General Social Survey; when that word is used, voters by a better than 2-to-1 margin, 49.3 percent to 21 percent, say that â€œtoo muchâ€ is spent. In other words, a politician can either use the phrase â€œspending to help the poorâ€ or the words â€œwelfareâ€ and â€œentitlementâ€ to describe the government programs to alleviate hardship and therefore produce antithetical reactions in the public.

And, not surprisingly, a lot of the antipathy against “welfare” still is being driven by whites, who are far more likely than Americans of other races to say that too much is spent on welfare. And the word “entitlement” rankles many people, because it suggests that some undeserving underclass thinks it is “entitled” to something for nothing.

Romney argues that “entitlements” smother opportunity. Historically, programs that have given people a hand up actually have created opportunity, since people who have some education, some food in their stomachs and a permanent address are more likely to get and keep jobs and even start businesses than those who don’t. Extreme poverty can push people down so far that just surviving from day to day is a challenge, and climbing up nearly impossible.

The question is, how much of the white middle class is still clueless enough to assume the poverty bell could never toll for them? As opposed to, say, the number who realize a lost job or a catastrophic medical bill could cost them everything they have? As it appears more and more likely Mittens will be the GOP nominee, I guess we’ll see.

The nature of political campaigning pretty much ensures that anyone elected to a high political office has to have some connection to wealth, and a growing percentage of Congress critters are people who have always lived in what we might call “comfortable circumstances.” As Kevin Drum says, Mr. Smith ain’t goin’ to Washington.

I’ve said before that Americans can be bamboozled about foreign policy, but they do eventually catch on when the issues touch on their personal experiences. I don’t think the remote and patrician Romney will be all that marketable next year. But I could be wrong.

30 thoughts on “The Wealth Gap”