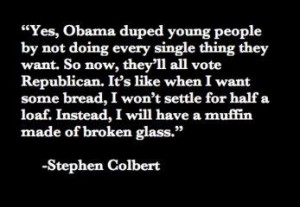 I see that the usual bilge about how it doesn’t matter whether Romney or Obama wins in November has already started. You’d think after the 2000 election people might have shut up, but no.

Looking back, the only presidential election in my lifetime in which the outcome possibly wouldn’t have made much difference in domestic or foreign policy was 1976, Ford vs. Carter. In those days, a relatively progressive Republican and a relatively conservative Democrat were nearly indistinguishable.

Of course, in hindsight, one could argue that Ford’s loss helped set the stage for Reagan’s win in 1980. The choices we make in each election starts the nation on a new trajectory, and only a fool thinks he knows where any trajectory will go.

Anyway — part of the problem is that Mr. Etch-a-Sketch truly is a blank slate. His record in Massachusetts tells us nothing about what he might do as President. The fact that he appears to be relatively sane and intelligent compared to the clowns he has been running against should not reassure anyone. Especially if there are Republican majorities in the House and Senate, which Everyone Says is going to be the case, my best guess is that he’ll stand aside and let them do whatever they want. My other best guess is that he will continue to cater to the base that put him in office. That prospect should terrify the socks off any sensible person.

Here’s something else that ought to scare the stuffing out of everyone:

Mitt Romney wants the United States to get much tougher with Iran and to end what a top adviser calls President Barack Obama’s “Mother, may I?” consensus-seeking foreign policy.

With the presidential nomination all but locked up, an examination of Romney’s foreign policy pronouncements and the team advising him on those issues indicates Americans and the world might expect a Republican campaign that reprises the hawkish and often unilateral foreign policy prescriptions that guided Ronald Reagan and George W. Bush.

“The world is better off when the United States takes the lead. We should not be playing ‘Mother, may I?’ about sanctions on Iran and relations with China and Russia,” said Richard Williamson, a top Romney foreign policy adviser. He has advised presidents beginning with Reagan, held many diplomatic posts in past Republican administrations and was Bush’s special envoy to Sudan.

I’m saying Romney is George W. Bush without the Texas accent, people. You elect him, you’ll get tax cuts for the rich up the wazoo, huge cuts in benefit programs, and a return to foreign policy by the Marlboro Man. Of course, I realize you can find people on the Left who whine that Obama is no better than Bush. These people are asshats.

And he’ll have a Republican majority in the House and Senate, many of whom will be pushing him further Right.

President Obama had a bare majority in his first two years, but many of them were Blue Dogs who voted with the Republicans on critical issues. Congress in effect pulled him further Right than he probably wanted to go. And the twits of the world throw up their hands and say, well, there’s no real difference which one we elect.

Which is what they said about Bush v. Gore. They don’t learn.

So, we pronouncements like “I think that if President Obama had really wanted to pass a cap-and-trade plan he would have done so in the last term.” With this Congress? Are so many people really that stupid?

Going to Schuler’s list: Yes, both Obama and McCain will be interventionist. But if one would invade Iran and the other wouldn’t — well, that’s a massive difference, even if both would embark on Libya-type adventures. There’s a good chance that Guantanamo stays open regardless of who is elected, but Romney’s supporters include many who support reinstituting torture; that’s extremely unlikely to be U.S. policy if Obama is reelected. Again, I’d call that a massive difference. On taxes, too, one candidate supports modest increases in tax rates for upper-level taxpayers, while the other favors large tax cuts from current levels; if either party wins a landslide, it’s likely that those positions would be enacted. No, it would not be a return to 1990s levels (nor, most likely, would it get taxes quite to where Ron Paul might want them), but again, there’s quite a bit of money for both individuals and the U.S. Treasury on the line.

Right now I’d like to take names of anyone who thinks Romney would be no worse than Obama, so theirs can be the first boots on the ground when President Romney orders an invasion.

27 thoughts on “Yes, It Matters Who Wins”