Apparently over the weekend certain Powers That Be decided that Bernie Sanders needed to be taken down. Sanders has benefited from being mostly ignored by the GOP, which has focused its guns on Hillary Clinton. But in the past couple of days several rightie spokesmouths have spread disinformation on Bernie, and soon the MSM will follow suit (see Steve M).

The ever-sensible Paul Waldman debunks this by pointing out that he’s proposing things we are already paying for. Sanders wants to change how we are paying for them.Â  “We shouldnâ€™t treat his proposals as though theyâ€™re going to cost us $18 trillionÂ on topÂ of what weâ€™re already paying,” Waldman says. Further,

And thereâ€™s another problem with that scary $18 trillion figure, which is what the Journal says is the 10-year cost of Sandersâ€™ ideas: fully $15 trillion of it comes not from an analysis of anything Sanders has proposed, but from the fact that Sanders has said heâ€™d like to see a single-payer health insurance system, and thereâ€™s a single-payer plan in Congress that has been estimated to cost $15 trillion. Sanders hasnâ€™t actually released any health care plan, so we have no idea what his might cost.

But this takes me to a long-standing gripe of mine. Whenever anyone talks about government subsidized health care, people get hysterical because they see their taxes going through the roof. What they don’t consider is that just about any taxpayer-supported national health care system would result in more money staying in their pockets, even if they are paying more in taxes. That’s because they wouldn’t be shelling out their own money to pay for medical care and health insurance. And a national not-for-profit system could save us all a ton of money through economies of scale.

The system we have now is wasteful, bloated and inefficient. We’re spending tons more money than people in other countries and getting less care for it. 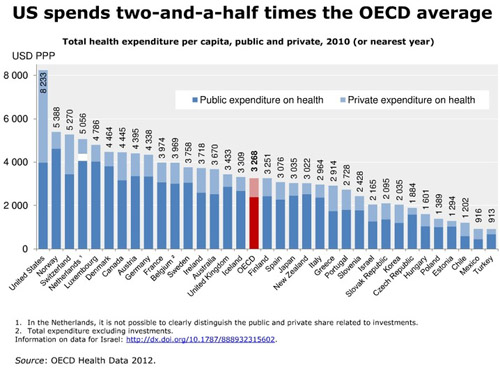 Young folks complain about paying for Medicare, but they don’t consider that without Medicare they’d be stuck paying off their parents’ medical debts, which often will run into six figures.

And then there’s college. We’re choking off our future as a nation, IMO, by allowing a college education to be so prohibitively expensive. Sanders wants to make it free, which I support, but even making it reasonable will do. Let’s at least go back to the time in which people could put themselves through college with a part-time job. Which was as recently as 1979, according to this article, which is worth reading. (I would have guessed more like 1969, but I haven’t crunched numbers.)

People who don’t have children to put through college, or who aren’t interested in college, might balk at helping others pay for it. But it’s good for the country in the long run to encourage people to get as much education as they are capable of learning. A nation of under-educated yahoos will not remain economically competitive forever.

Back to health care. Waldman:

So letâ€™s say that Bernie Sanders became president and passed a single-payer health care system of some sort. And letâ€™s say that it did indeed cost $15 trillion over 10 years. Would that be $15 trillion in new money weâ€™d be spending? No, it would be money that weâ€™re already spending on health care, but now it would go through government. If I told you I could cut your health insurance premiums by $1,000 and increase your taxes by $1,000, you wouldnâ€™t have lost $1,000. Youâ€™d be in the same place you are now.

By the logic of the scary $18 trillion number, you could take a candidate who has proposed nothing on health care, and say, â€œSo-and-so proposes spending $42 trillion on health care!â€ It would be accurate, but not particularly informative.

And, again, with economies of scale, and reducing the profit-taking, we really ought to be able to get more medical bang for the buck than we have been these past many years. The ACA helped, but it was just a tweak compared to what’s really needed.

Thereâ€™s something else to keep in mind: every single-payer system in the world, and there are many of them of varying flavors, is cheaper than the American health care system.Â Every single one. So whatever you might say about Sandersâ€™ advocacy for a single-payer system, you canâ€™t say it represents some kind of profligate, free-spending idea that would cost us all terrible amounts of money.

Put another way, most of the time when people talk about health care reform they are just talking about moving the bills around. You can pay for it through taxes, or through insurance, or out of your own pocket, but you’re still paying for it. The cost doesn’t go away unless you tackle the systemic reasons why there’s so much cost. The ACA partly does that; no Republican proposal ever does.

The Jeb! tax plan confirms, if anyone had doubts, that the takeover of the Republican Party byÂ charlatans and cranksÂ is complete. This is what the supposedly thoughtful, wonkish candidate of the establishment can come up with? And notice that theÂ ludicrous claimÂ that most of the revenue effects of huge tax cuts would be offset by higher growth comes from economists who, like Jeb!, are very much establishment figures â€“ but who evidently find that the partisan requirement that they support voodoo outweighs any fear of damage to their professional reputations.

See also the view from nowhere in the Washington Post: Jeb Bushâ€™s new tax plan could cost $3.4 trillion over next decade.

22 thoughts on “GOP Feels the Bern”