Adding to New Orleans’ Mayor Mitch Landrieu’s spot-on speech on Confederate Monuments — There’s a big Confederate monument in St. Louis that the new mayor, a Democrat, wants to take down. And naturally people of St. Louis are arguing about it. I wrote a letter to the editor expressing my, um, anti-Confederate views that the St. Louis Post-Dispatch published a couple of days ago. But the Post-Dispatch word count limit didn’t let me say everything I had to say.

First, regarding St. Louis — Missouri was a state that allowed slavery, and in the 1860 elections “Breckinridge Democrats” won a majority of seats in the statehouse. However, the state as a whole was not that keen for secession. Claiborne Fox Jackson, elected governor in 1860, ran as an anti-secession candidate and won by a comfortable margin.  But Gov. Jackson was not, in fact, anti-secession.

After he took office in January 1861, Jackson arranged for a state convention to settle the matter of whether the state would secede or remain in the Union; the convention voted for the Union, by a vote of 98-1. Jackson then declared the state would be neutral in any upcoming armed conflict, and after Ft. Sumter he refused to send state militia to Washington, as Lincoln requested.

At some point, Jackson got in touch with Jefferson Davis to plan a military secessionist coup. The first stage of this plan was to use state militia to seize the federal arsenal in St. Louis. Munitions taken by Confederates from a federal arsenal in Baton Rouge — two howitzers, two siege guns, 500 muskets, and ammunition —  were shipped by steamboat to St. Louis for this purpose, sometime about May 1, 1861.

However, the officer in charge of the St. Louis arsenal, Captain Nathaniel Lyon, had been tipped off about the movement of Confederate weapons. Lyon secretly moved most of the rifles and muskets in the arsenal across the river to Alton, Illinois. Then on May 10 he and troops under his command surrounded the militia that had been assembled just outside St. Louis in preparation for the coup. The militia surrendered. So far, so good.

St. Louis was one of the few parts of Missouri that had voted for Lincoln in 1860, and this was largely because the city had been just about taken over by German immigrants. (These included Adolphus Busch, currently being featured in Budweiser ads, who arrived in 1857; Eberhard Anheuser had arrived in 1842.) The Germans were anti-slavery and pro-Union to the hilt. What we might call the native-born population of St. Louis were of mixed opinions on secession and slavery. But in St. Louis, a lot of pro-secession sentiment was mixed together with anti-German nativism, and there were hard feelings going both ways.

It so happens that Lyon’s troops were mostly German immigrants. As the federal troops marched state militia through St. Louis, secessionists lined the streets, jeering the “Dutch” and throwing rocks and dirt. At some point, somebody fired a gun. And then more people, including the federal troops, fired guns. Several people, mostly civilians, were killed. And several days of violent riots followed. But St. Louis remained a Union stronghold ever after.

On May 11, Gov. Jackson appointed Sterling Price to be Major General of the Missouri State Guard. Officially, Jackson was still posing as “neutral” — neither pro nor anti Union — but he sent dispatches to the Confederacy saying that if Confederates invaded, the Missouri State Guard would help them “liberate” St. Louis. Missouri Lt. Governor Thomas C. Reynolds actually traveled to Richmond to request an invasion.

By June, Captain Lyon had been promoted to Brigadier General. Lyon marched troops to Jefferson City, the state capitol, arriving June 13. Jackson and most of the “Breckinridge Democrats” fled to Boonville, Missouri, to continue to try to flip the state to the Confederacy. At one point Jackson actually led state militia against Union troops.

In July, the convention that had voted against secession met again and declared that the governor’s office had been voided. A new governor was appointed. And, in fact, the state government was such a mess that much of the state was under martial law for much of the war, which didn’t turn out well, either. But that’s another story.

Jackson and the renegade state officials met in Neosho, Missouri, in August, and voted an ordinance of secession; shortly after that the Confederacy recognized Missouri as its 12tth state. However, as the enormous majority of the state was under Union control, that gesture was meaningless.

In 1864, Sterling Price led Confederate troops toward St. Louis with the intention to invade it, but he didn’t get very close. The Confederates were stopped near Ironton by troops commanded by Gen. Thomas Ewing, who was General Sherman’s brother in law, and by locals who were what was left of the Ironton militia unit. The latter included some of my kinfolk, according to family lore. 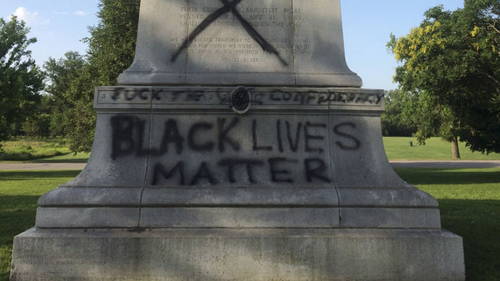 Base of the Confederate Memorial in St. Louis after recent, um, renovation. Reuters photo.

Anyway, all this history rather begs the question of what a Confederate monument is doing in St. Louis.

The monument itself, erected by the Daughters of the Confederacy in 1914, was designed deliberately to be innocuous. It bears no Confederate battle flags or likenesses of famous generals. Instead, under an angel representing “the spirit of the Confederacy” are generic (but heroic!) figures that are supposed to be sending a youth off to war. Whether there were any St. Louis Confederate regiments I do not know, and the monument doesn’t tell us.

(The Missouri Daughters of the Confederacy were big on planting innocuous monuments around the state. There used to be a big, granite rock on the University of Missouri–Columbia campus when I was a student there. The rock bore a plaque dedicating the rock to the Confederacy, courtesy of the Daughters. It was a huge object of contention, and the thing was removed to parts unknown about 1974, a year after I graduated. I doubt that anyone misses it now.)

As far as St. Louis is concerned, a more appropriate monument to the spirit of the Confederacy would have featured a snake hiding in grass, or maybe a weasel. The Missouri Confederates were not a heroic crew, in particular the psychopathic “bushwhackers” such as William Quantrille and “Bloody Bill” Anderson. I notice there are no heroic monuments to those guys.

The truth is, the enormous majority of Confederate monuments in the United States have little to do with history. They do not mark a place where any particular thing happened. They don’t teach us anything about the history of The Late Unpleasantness. They are totems of white supremacy, period.

Even when a monument has some legitimate reason for being, if you look into the monument’s history, white supremacy tends to be lurking there. For example, there’s a statue of Confederate Gen. Thomas “Stonewall” Jackson on the Bull Run/Manassas battlefield, now a national park. The statue occupies the spot where Jackson’s regiment was said to be holding against a Union assault, and some other general is said to have rallied his troops by saying “There stands Jackson like a stone wall.” It’s a bit of actual Americana, in other words, so arguably the monument has some justification for being there. But when the statue was dedicated in 1940, the governor of Virginia actually said that the statue of Jackson honors “one of the greatest soldiers of the Anglo-Saxon race.” Argh.

Some of the people defending the monument in St. Louis argue that it has artistic value. They like looking at it, they say. Fine; they are free to raise money and buy the damn thing, and then they can move it to private property and look at it all they like. I say the same thing about the other Confederate monuments as well, since (again) few of them mark a place where any historical thing happened. There must be a really rich pro-Confederate guy some place who will buy them up and move them to his estate. Maybe he can open a theme park. Just get them off public property.